Feb 3, 2019 2:27 PM PHT
Sofia Tomacruz
Facebook Twitter Copy URL
Copied
'We are showing the world that we Filipino Muslims and Christians are one,' says Imam Council of the Philippines Chairman Aleem Said Basher 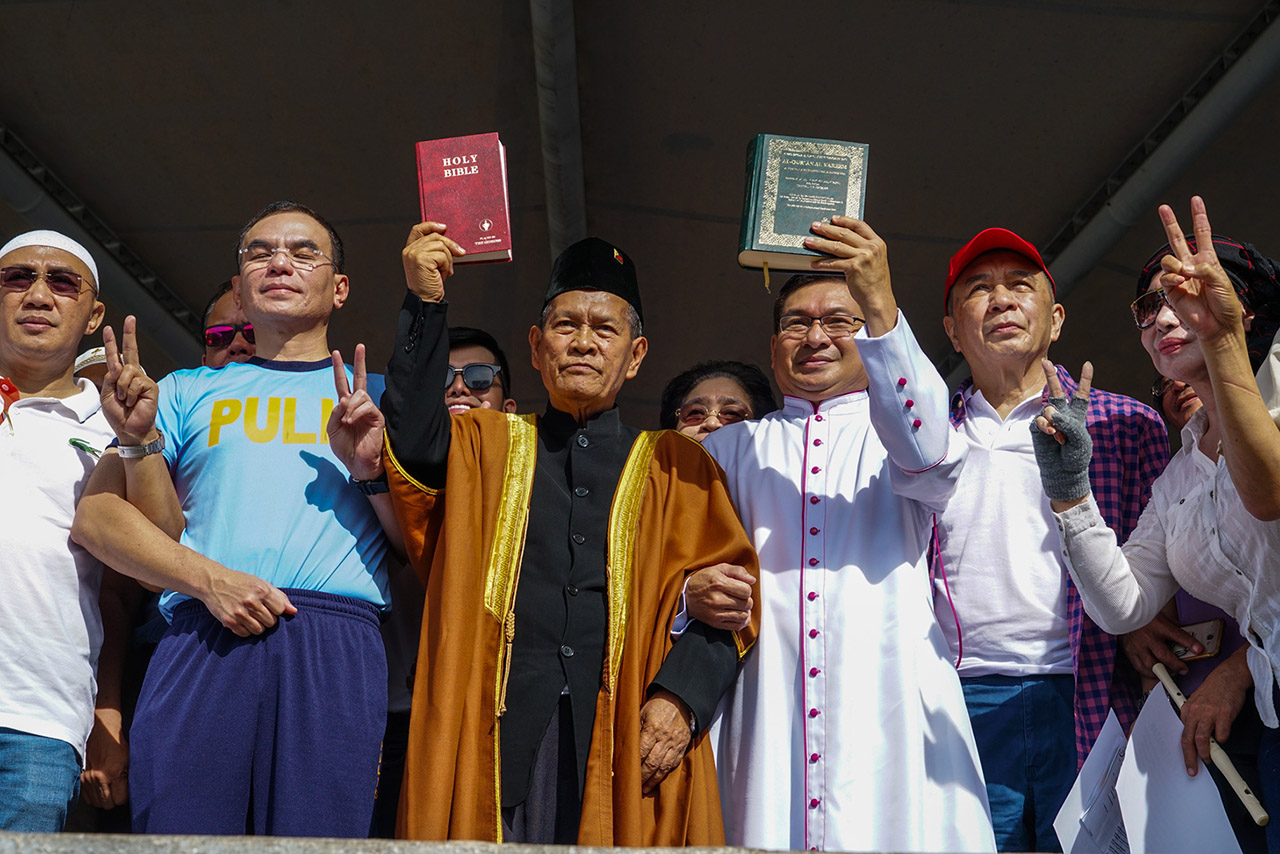 MANILA, Philippines – In a show of unity and peace, Christians and Muslims joined forces in a prayer rally on Sunday, February 3, to condemn the deadly blasts that rocked the southern Philippines last week.

“We are showing the world that we Filipino Muslims and Christians are one,” said Imam Council of the Philippines Chairman Aleem Said Basher.

The groups condemned the twin blasts that hit the Jolo Cathedral in Sulu, killing at least 22 on January 27, and the grenade blast in a mosque in Barangay Talon-Talon, Zamboanga City, which killed two on January 30. (READ: Muslim religious leaders call for unity after Zamboanga City mosque blast)

In his speech, Basher dispelled perceptions that the attacks signify a religious war, and urged members of all religions to counter this by coming together for peace.

Vicar General of the Armed Forces of the Philippines Monsignor Albert Songco expressed the same message of unity.

“Where there is armed conflict let us stretch out our arms to our brothers and sisters,” he said. “Grant us a sense of urgency to activate the forces of goodness, justice, love, and peace in our communities.”

Along with them were Alexander Lapore of the Knights of Columbus Diocese of Cubao, Bishop Noel Pantoja of the Philippine Council of Evangelical Churches, Jesus Is Lord Church leader Brother Eddie Villanueva, and El Shaddai leader Brother Mike Velarde. 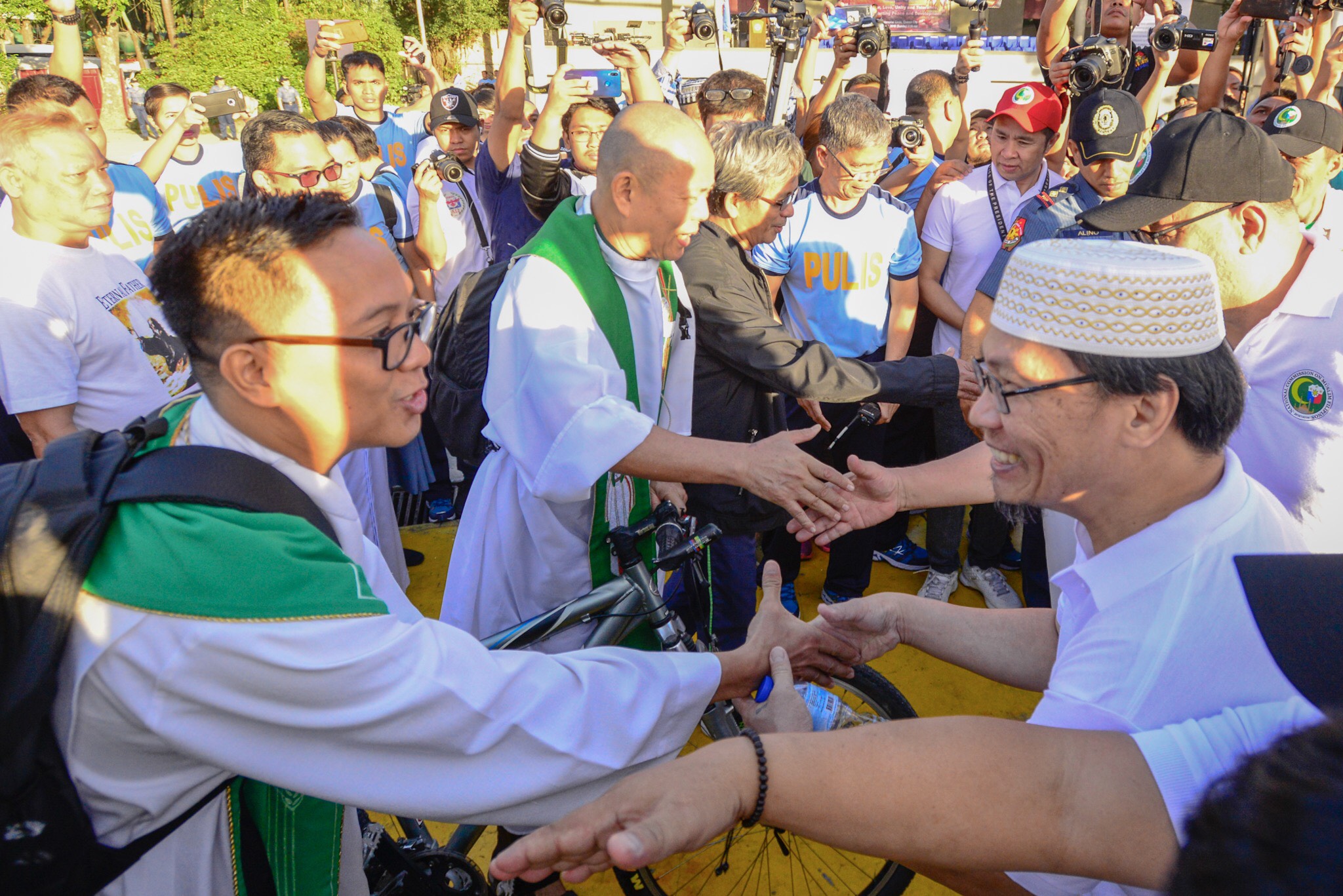 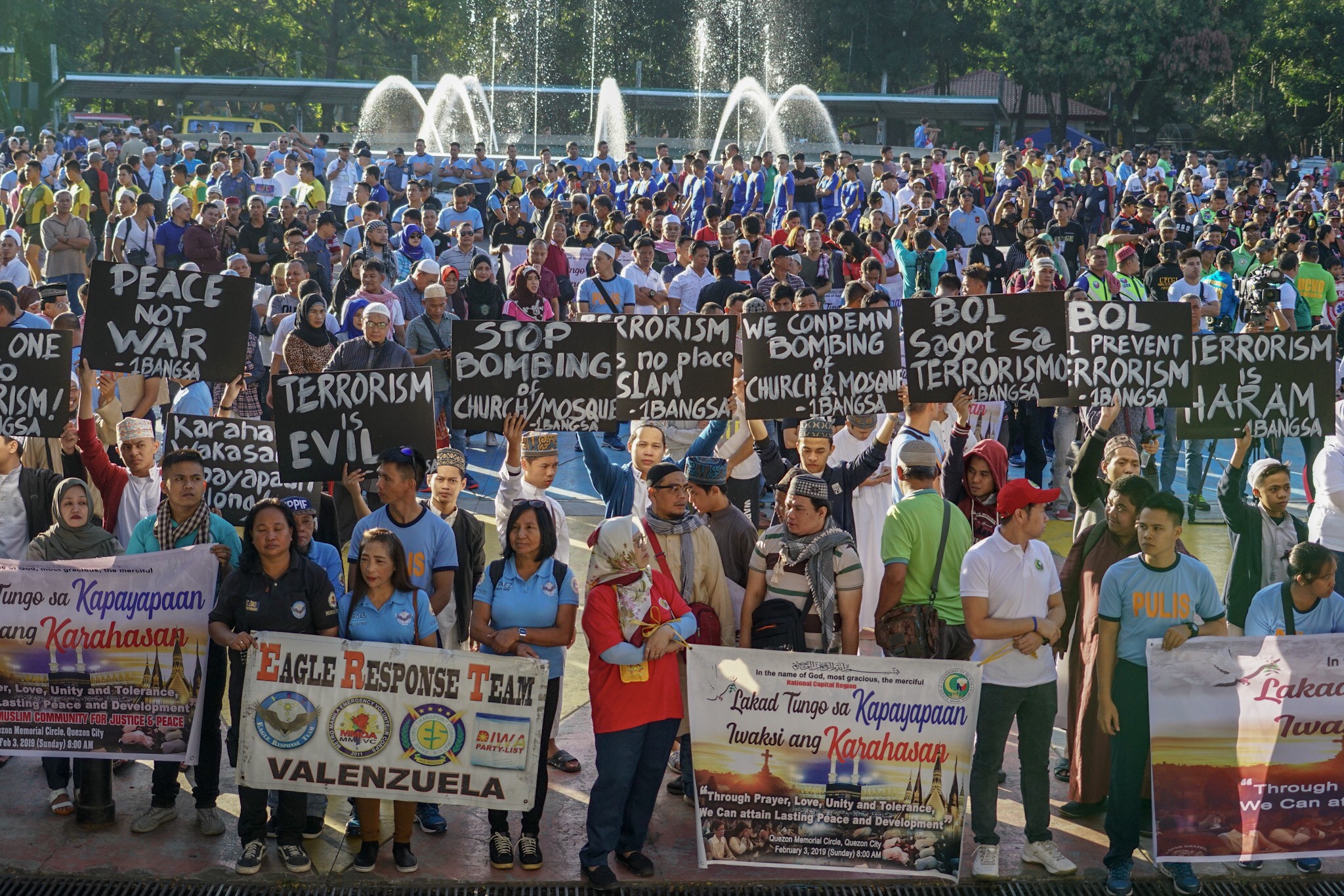 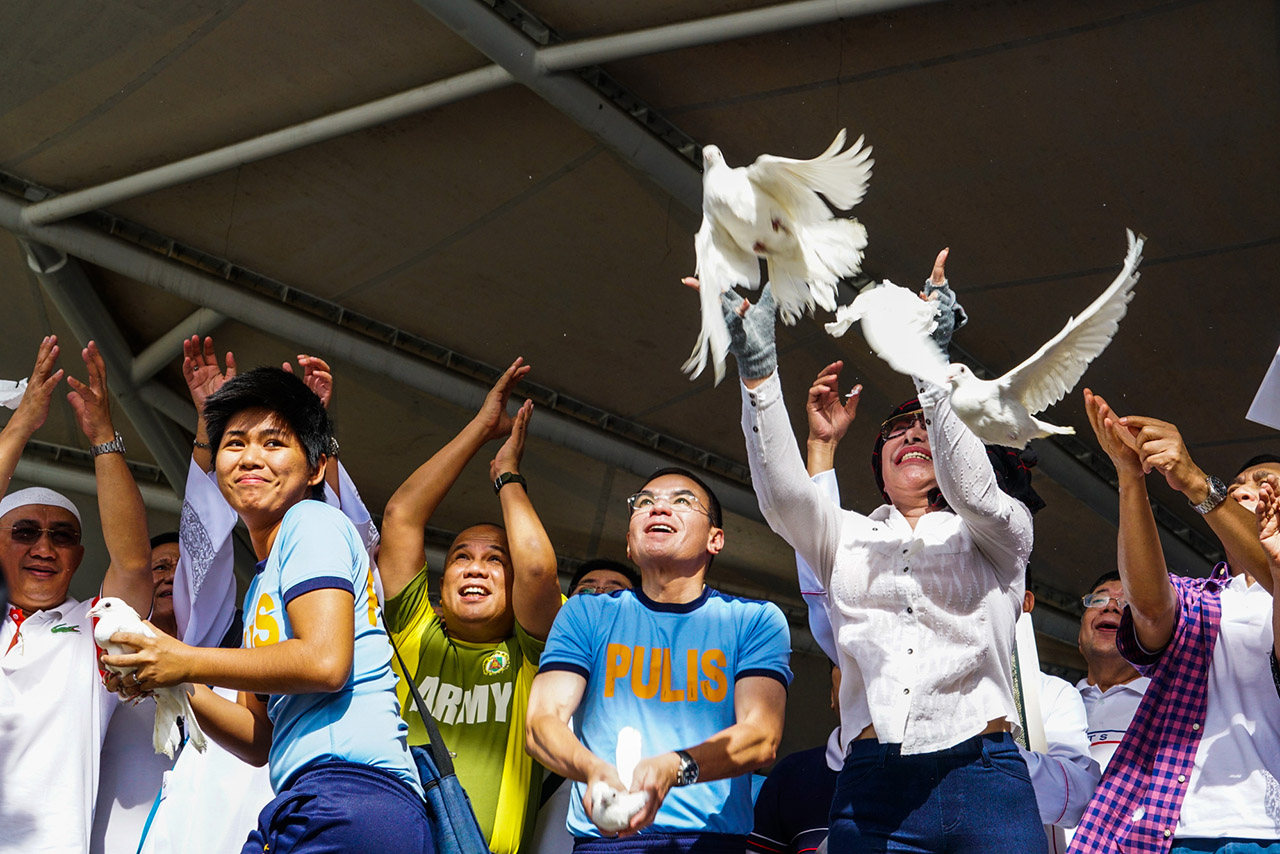 Basher and Songco also held the symbolic exchange of the Muslim Koran and the Christian Bible.

The event was capped off with the signing of a peace covenant among groups who attended. 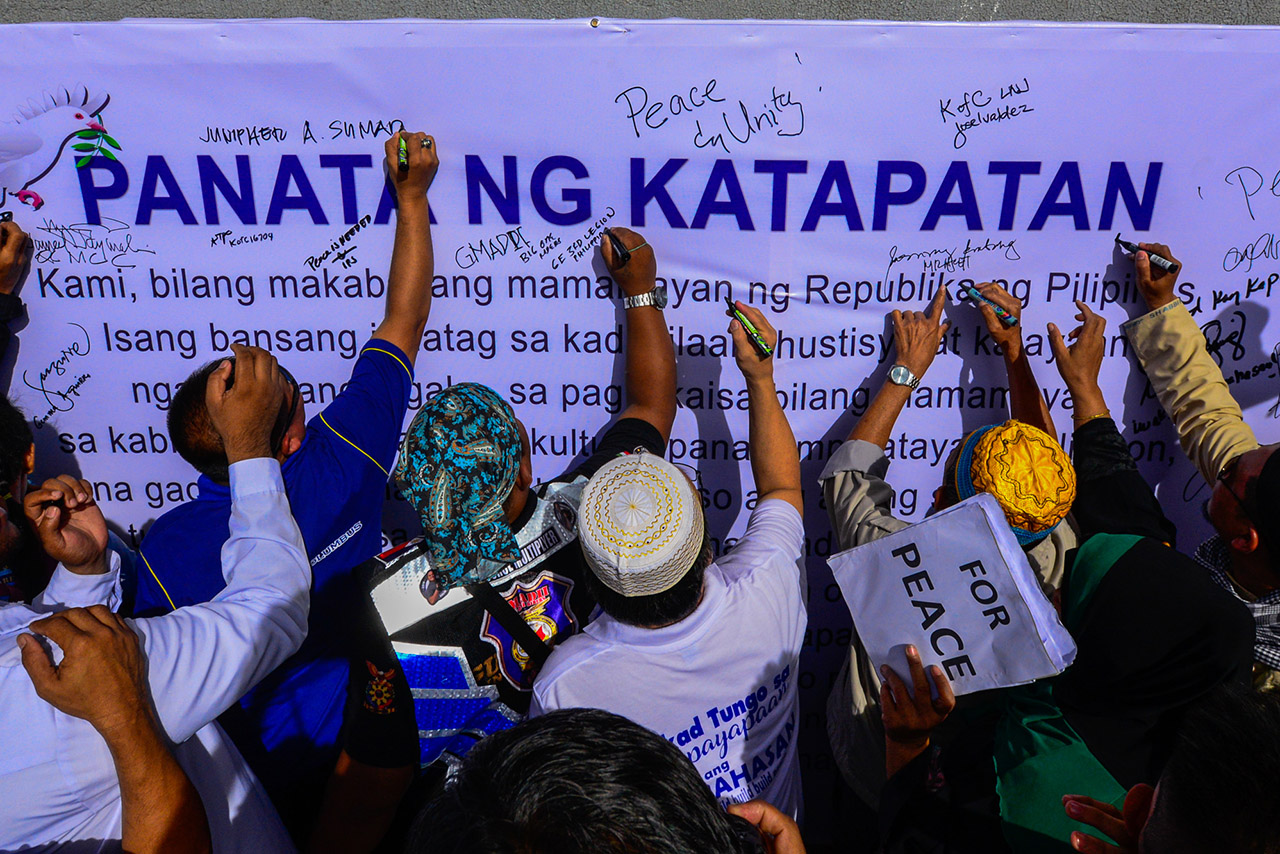 Muslim religious leaders, or ulama, in Zamboanga City earlier called on Muslims and Christians to continue advocating for peace, saying any attack on a place of worship “can never be justified by rhyme or reason.”

“It is the most heinous desecration of a sacred place, on a sacred day, and at a sacred moment of worship,” said Archbishop-elect Angelito Lampon, former bishop of Jolo, and Cardinal Orlando Quevedo, former parish priest of Jolo, in a joint statement on Sunday.

The two religious leaders added, “It is truly a satanic act that all sacred religions must condemn.” – Rappler.com