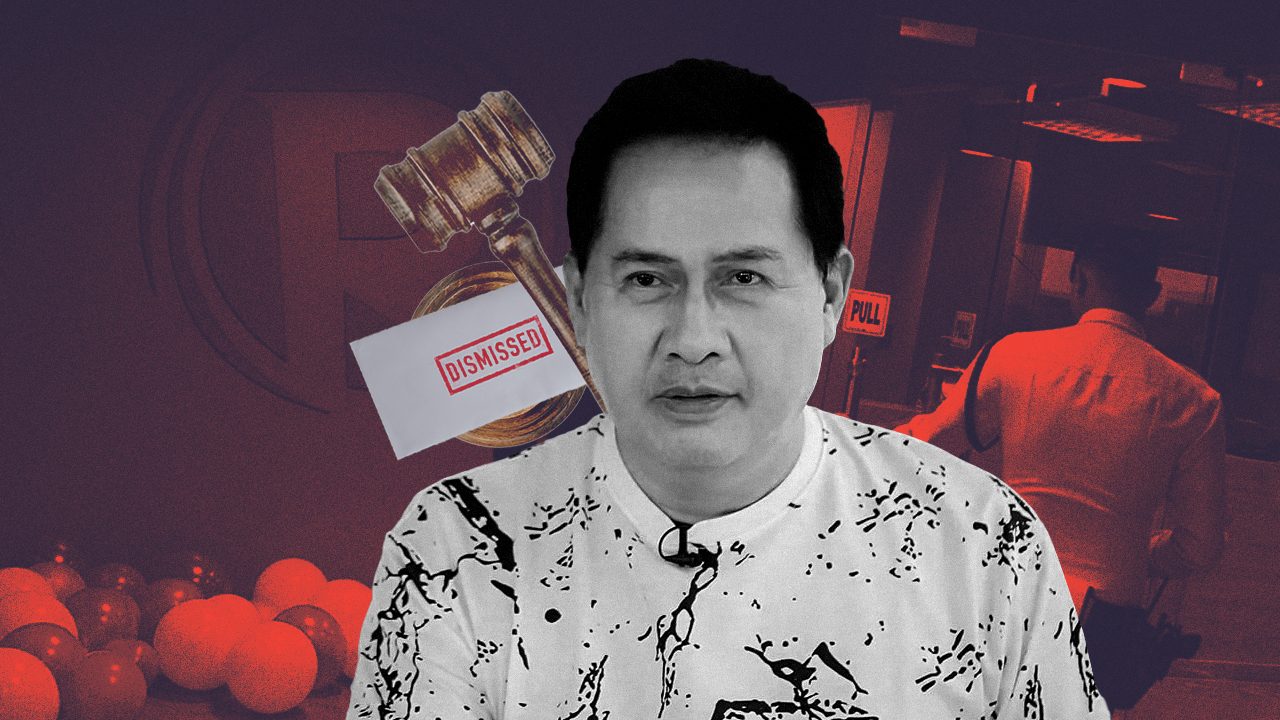 Facebook Twitter Copy URL
Copied
'The dismissal of the last set of complaints for cyber libel filed against Rappler and its journalists by surrogates of Mr. Apollo Quiboloy is a vindication of free expression and the rights of a free press,' says Rappler lawyer Theodore Te

Prosecutors in Davao City threw out the last of the more than a dozen cyber libel complaints filed by followers of influential doomsday preacher Apollo Quiboloy against Rappler Incorporated, its journalists, and four people they interviewed for a series of investigative reports, editorials, and videos published since December 2021.

A copy of the resolution was received on Wednesday, June 22, by Rappler’s legal counsel in Davao City, lawyer Manuel Quibod of the Ateneo Legal Aid Services Office.

Cornelio gave Rappler his academic views about Quiboloy’s KOJC based on studies on religious groups, while Stone, Killion, and Fernandez spoke about their experiences during the years they spent as followers of the controversial Davao-based preacher.

Rappler’s lawyer, Theodore Te, said, “The dismissal of the last set of complaints for cyber libel filed against Rappler and its journalists by surrogates of Mr. Apollo Quiboloy is a vindication of free expression and the rights of a free press. That it came from the city prosecutor of Davao City, the bailiwick of Mr. Quiboloy, is a pleasant surprise, for which kudos should be given to the prosecutors of Davao City.”

He added, “The continuing resort to cyber libel as a means to silence dissent and stifle criticism remains a battleground for free expression and free press advocates. The Supreme Court itself has expressed a view that it is perhaps high time that the continued criminalization of libel must be reviewed. As a new administration comes in, it might be a good way to start.”

In April, Te said he counted at least 16 complaints and 50 counts of cyber libel filed by Quiboloy’s followers against Rappler, its journalists, and interviewees in the Mindanao cities of Cagayan de Oro, Panabo, Ozamiz, and Davao.

The first seven of the string of cyber libel complaints were dismissed by a panel of prosecutors in Cagayan de Oro in February, and another seven were thrown out by prosecutors in General Santos City the following month.

Soon, prosecutors in Ozamiz and Panabo cities came out with separate resolutions, dismissing nearly identical complaints, including at least one motion for reconsideration.

The dismissed cyber libel complaints in Davao City were filed as a response to Rappler’s investigative reports, editorials, and video productions that examined the inner workings of Quiboloy’s church and how these impacted lives based on the indictment papers in the US and the experiences of former members Stone, Killion, Fernandez, and a fourth woman working abroad.

The publications did not sit well with the KOJC ministers and coordinators who called these “unfair, baseless, malicious, false, and defamatory” that turned their church into a “laughing stock.”

They said their reputations as KOJC ministers and coordinators were besmirched, and they felt belittled.

No proof of actual malice

Davao’s prosecutors, however, said the four complainants “failed to show proof of actual malice,” and “they cannot be considered as the offended parties in these cases.”

“The private complainants were never named nor identified on the subject news articles or videos other than the resource persons, President Rodrigo Duterte, and Apollo Quiboloy,” the resolution read in part.

Since the complainants were unidentifiable in the publications, prosecutors said, “they have no causes of action to file these instant complaints.”

Neither could they sue on behalf of their group because the church members and ministers “do not have a single common reputation that will give them a common or general interest,” the prosecutors stated.

They said a rule in libel is that complaints must be brought by those against whom the defamatory charges have been made.

The prosecutors also cited the Public Figure Doctrine that provides that “the presumption of malice does not attach if the subject of the alleged libelous statement is a public figure.”

They pointed out that Quiboloy is a public figure known not only in the Philippines but also in other countries.

“Hence, it is incumbent upon the complainants to show proof of actual malice as the news articles and videos complained of are of privileged character,” read part of the resolution.

Rappler’s series of investigative reports, editorials, and video productions were an offshoot of the November 2021 unsealing of a superseding indictment by a federal grand jury in a court in California against Quiboloy and his KOJC associates identified as Teresita Tolibas Dandan, Helen Panilag, Felina Salinas, Guia Cabactulan, Marissa Duenas, Amanda Estopare, Bettina Padilla Roces, and Maria de Leon.

Wanted by the FBI

The FBI released the wanted posters of Quiboloy and two of his associates on January 31, about a month after Rappler published the first of its investigative reports.

The self-styled septuagenarian preacher, who has convinced his followers that he is the “appointed son of God” through whom eternal salvation and damnation comes, faces a statutory maximum penalty of life imprisonment if convicted in the sex trafficking conspiracy case alone.

One of those indicted with Quiboloy in the US, Maria de Leon, has agreed to turn state witness against the KOJC leader and his other associates. – Rappler.com