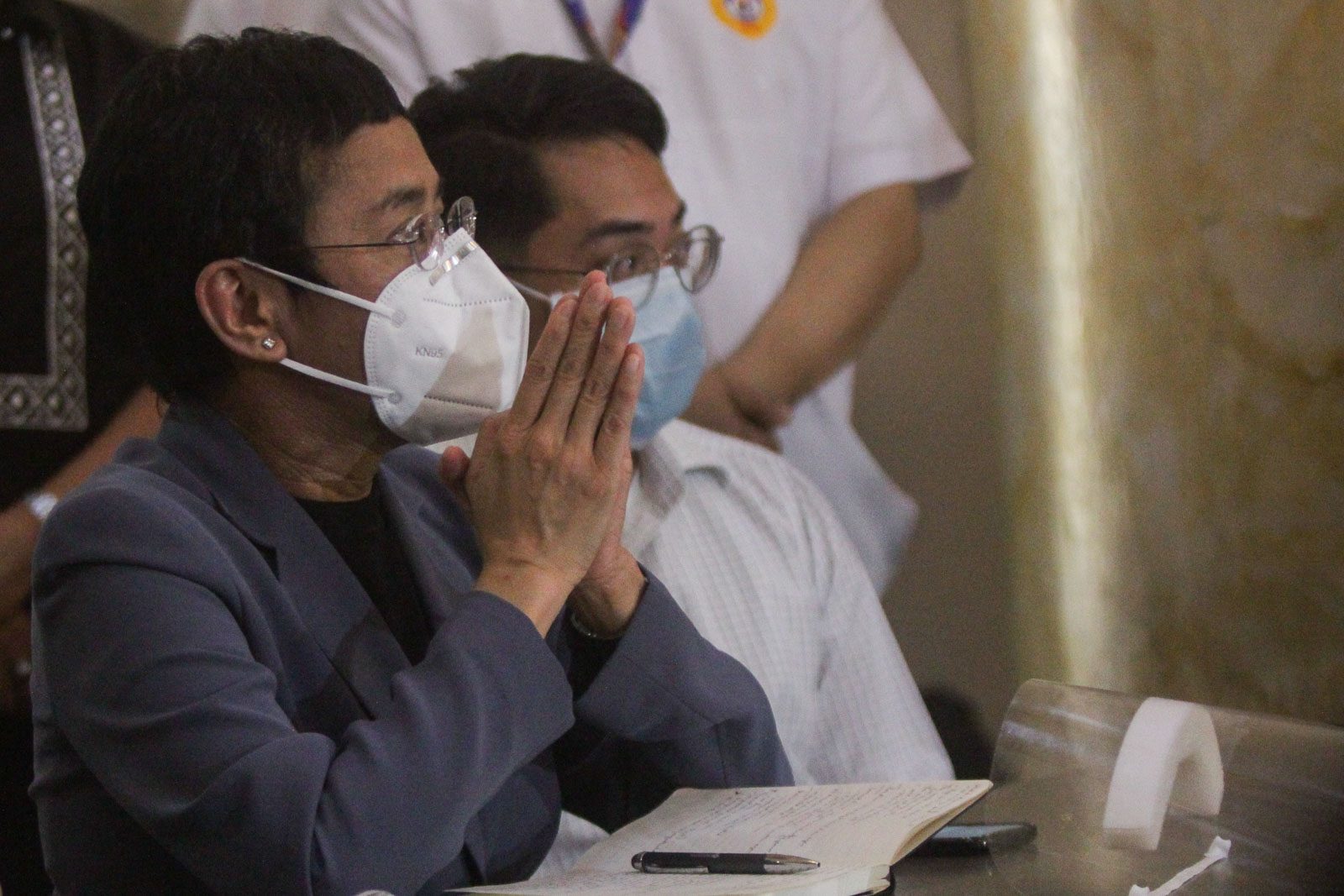 Facebook Twitter Copy URL
Copied
(1st UPDATE) 'The ongoing campaign of harassment and intimidation against me and Rappler continues, and the Philippines legal system is not doing enough to stop it,' Nobel Peace Prize laureate and Rappler CEO Maria Ressa says

In a 16-page decision dated October 10, the CA’s fourth division denied the appeal. Associate Justices Roberto Quiroz, Ramon Bato Jr., and Germano Francisco Legaspi signed the ruling. They were the same justices who signed the CA decision, which earlier affirmed the conviction of Ressa and Santos.

According to the CA, the arguments raised by Ressa and Santos were already resolved.

“A careful and meticulous review of the motion for reconsideration reveals that the matters raised by the accused-appellants had already been exhaustively resolved and discussed in the assailed Decision,” the court said.

The CA also claimed Ressa’s and Santos’ conviction is not meant to curtail freedom of speech.

“In conclusion, it [is] worthy and relevant to point out that the conviction of the accused-appellants for the crime of cyberlibel punishable under the Cybercrime Law is not geared towards the curtailment of the freedom of speech, or to produce an unseemingly chilling effect on the users of cyberspace that would possibly hinder free speech.”

On the contrary, the CA said, the purpose of the law is to “safeguard the right of free speech, and to curb, if not totally prevent, the reckless and unlawful use of the computer systems as a means of committing the traditional criminal offenses…”

In a statement, Nobel Peace laureate Ressa said she is “disappointed” but not surprised by the ruling.

“The ongoing campaign of harassment and intimidation against me and Rappler continues, and the Philippines legal system is not doing enough to stop it. I am disappointed by today’s ruling but sadly not surprised,” Ressa said.

Ressa added: “This is a reminder of the importance of independent journalism holding power to account. Despite these sustained attacks from all sides, we continue to focus on what we do best – journalism.”

Santos, in a separate statement, said he still believes that the rule of law will prevail.

“The CA’s decision to deny our motion is not surprising, but it’s disheartening nevertheless. As we elevate our case to the SC, our fight against intimidation and suppression of freedom continues. We still believe that the rule of law will prevail.”

“The CA decision denying the MFR [motion for reconsideration] is disappointing. It ignored basic principles of constitutional and criminal law as well as the evidence presented. Maria and Rey will elevate these issues to the SC and we will ask the SC to review the decision and to reverse the decision,” Te said in a statement.

The CA also explained its findings on the arguments based on:

On the validity of the cybercrime law, the court cited a ruling which, according to them, decided the constitutionality of the law.

“We find it unnecessary to dwell on the issue raised by accused-appellants since the Supreme Court, in Jose Jesus M. Disini, Jr., et al., v. The Secretary of Justice, et al. (Disini Case), 5 had already ruled on its validity and constitutionality, with finality.”

The CA also reiterated that the story in question was republished. The court said the argument that ex-post facto was applied on the theory that the correction of one letter is too unsubstantial and cannot be considered a republication is “unavailing.”

“As settled, the determination of republication is not hinged on whether the corrections made therein were substantial or not, as what matters is that the very exact libelous article was again published on a later date,” the appeals court said.

On the increase of penalty, the CA said the argument that Wilberto Tolentino v. People has no doctrinal value and cannot be used as a binding precedent as it was “an unsigned resolution, is misplaced.” That case said the “prescriptive period for the crime of cyber libel is 15 years.”

The court also highlighted the difference between traditional and online publications: “As it is, in the instance of libel through traditional publication, the libelous article is only released and circulated once – which is on the day when it was published.” Such is not the case for an online publication, the court said, where “the commission of such offense is continuous since such article remains therein in perpetuity unless taken down from all online platforms where it was published…”

The term “public figure” in relation to libel refers more to a celebrity, it said, citing the Ciriaco “Boy” Guingguing v. Honorable Court of Appeals decision. The decision said a public figure is “anyone who has arrived at a position where public attention is focused upon him as a person.”

It also cited the Supreme Court decision on Alfonso Yuchengco v. The Manila Chronicle Publishing Corporation, et al., which resolved the argument whether a businessman can be considered a public figure. The court said that being a known businessman does not make Keng a public figure who has attained a position that gave the public “legitimate interest in his affairs and character.”

There is no proof, too, that “he voluntarily thrusted himself to the forefront of the particular public controversies that were raised in the defamatory article,” the CA added.

The Manila court interpreted the cyber libel law as having a 12-year proscription period, as opposed to only a year. The lower court also decided that republication is a separate offense.

Aside from affirming the Manila court’s ruling, the CA also imposed a longer prison sentence on Ressa and Santos, originally set for six months and one day as minimum to six years as maximum. The appeals court added eight months and 20 days to the maximum imprisonment penalty. – Rappler.com