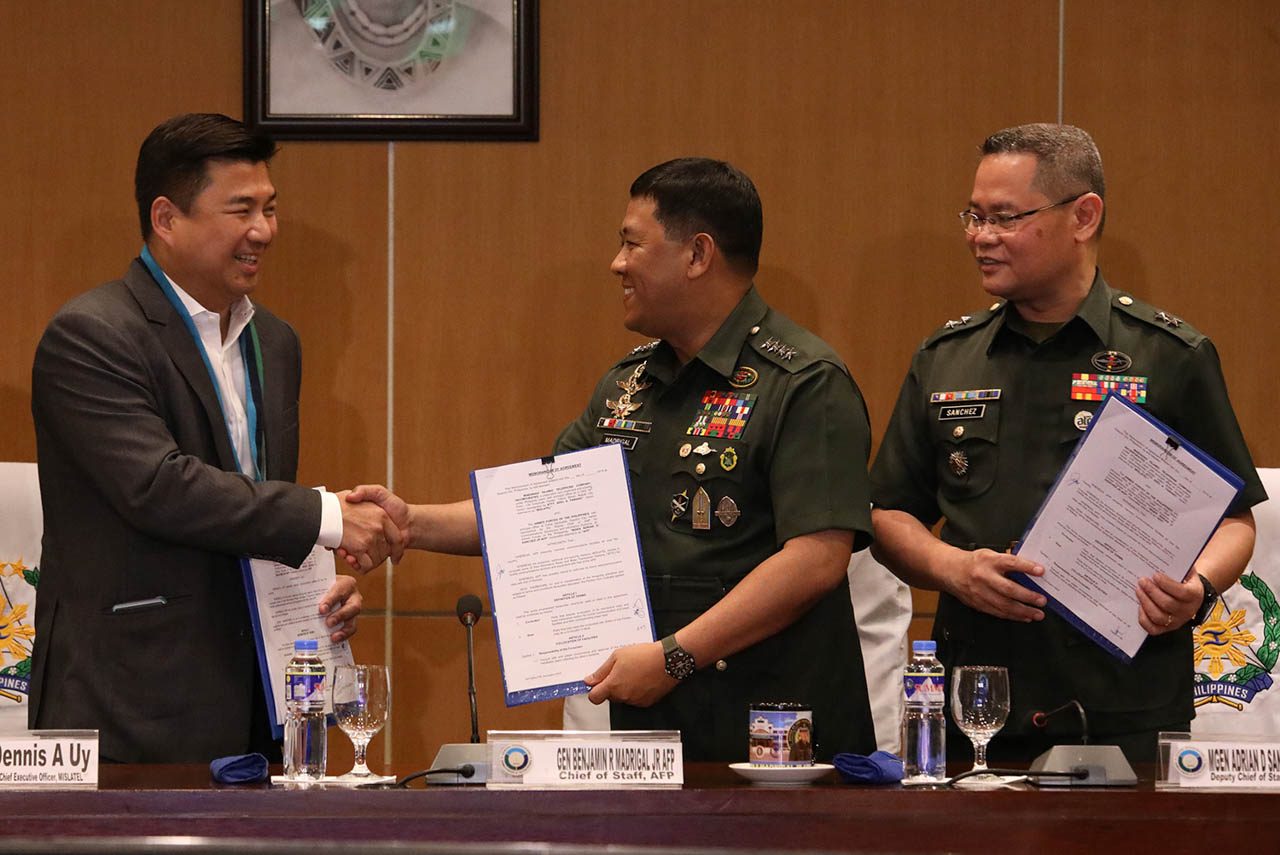 MANILA, Philippines – The Armed Forces of the Philippines (AFP) officially allowed the Mislatel consortium to build facilities in military camps and installations.

Mislatel is poised to become the country’s 3rd major telecommunications player, under the name Dito Telecommunity. It is a consortium led by Davao City-based businessman Dennis Uy, and includes Udenna Corporation, Chelsea Logistics, and China Telecom, which is controlled by the Chinese government.

Under the agreement, the AFP will identify specific locations where Mislatel can install and manage communication equipment “without undermining the operations of affected AFP units,” the military said in a media release.

The AFP will also determine the rental value of facilities to be used by Mislatel, which will shoulder all construction costs and tax payments.

“Payment will be made by providing CEIS equipment, upgrade, services, and training to the AFP equivalent to the monetary value of the lease subject to inflation,” the military said.

Meanwhile, Mislatel “guarantees that the devices, equipment, and/or structures installed at the site provided by the AFP shall not be used to obtain classified information as a measure to prevent electronic espionage.”

“With this partnership with the AFP, we are nearer our goal of building a wide and robust network,” Uy said in a statement.

Noting that the AFP has similar arrangements with telcos Globe and Smart, AFP Chief of Staff Benjamin Madrigal Jr said the deal with Mislatel gives the new telco a “fair chance” to compete.

“Our [agreements] with other telcos significantly improved the information and communications technology infrastructure of the AFP and we are optimistic that this partnership will also bring great benefits to the Armed Forces,” Madrigal added.

Mislatel’s equipment will mostly “co-locate” with those of Globe and Smart on already existing “long lines,” towers, and other infrastructure in strategic locations, the military chief said.

Hurdles to Mislatel’s franchise to operate were cleared by the Senate on February 6. As Dito Telecommunity, the consortium will begin rolling out services in 2020.

Concerns were raised early on that the telco’s infrastructure may be used by the Chinese government for espionage.

(All of these things, well all of them are, even Globe or Smart…there is a threat…so all of them, we know they are vulnerable.)

“We exercise security [in] all aspects…. Part of our role is being security conscious,” he further said, adding that the AFP’s intelligence units have programs and activities that ensure the security of military communications.

Defense Secretary Delfin Lorenzana has yet to sign off on the agreement. – Rappler.com