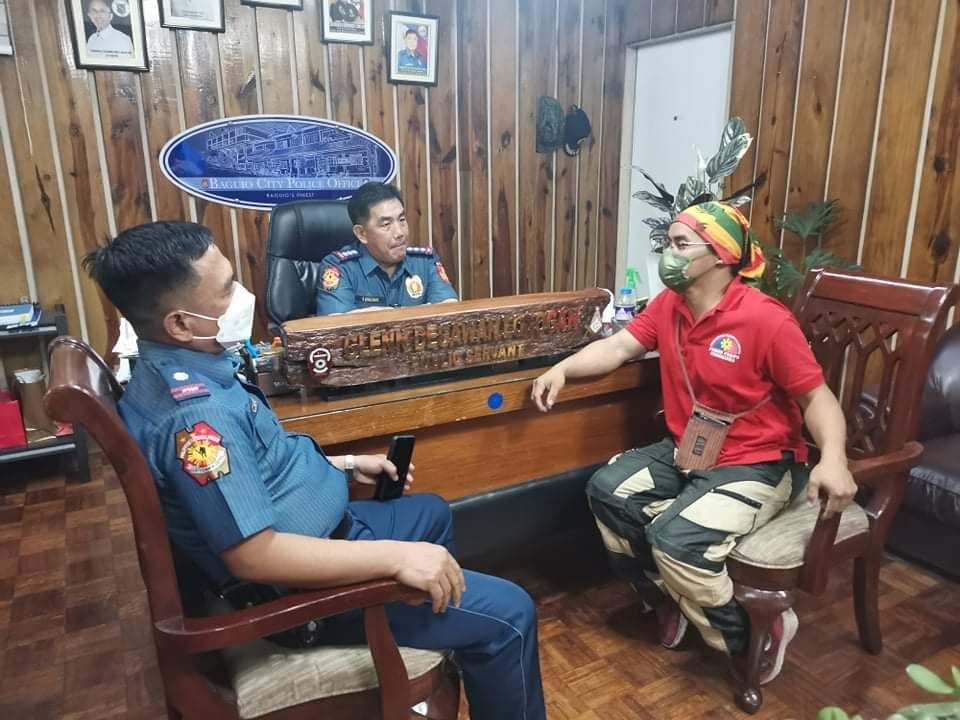 TARGET. Baguio Correspondents and Broadcasters Club Inc (BCBC) President Aldwin Quitasol discusses the March 1 attempt on his life with Baguio City Police Chief Glenn Lonogan and the head of Station 1, which has jurisdiction over the place of incident.

BAGUIO CITY, Philippines — The media community in the City of Pines closed ranks on Thursday, March 3, to condemn the March 1 attack on the president of the city’s oldest media club.

Unidentified assailants on a motorcycle fired at Baguio Correspondents and Broadcasters Club Inc (BCBC) president Aldwin Quitasol at around 10 pm on Tuesday, March 1, while he was walking on a dimly-lit road in Quezon Hill.

Quitasol dropped to the ground when he heard the shot. The shooters sped past him and drove away.

“An attack on one is an attack to all,” said the joint statement by the National Union for Journalists of the Philippines (NUJP) – Baguio –Benguet Chapter, the BCBC , and the Kordilyera Media-Citizen Council.

Quitasol writes for the Daily Tribune and was a former reporter for Northern Dispatch, Interaksyon, and the Baguio Chronicles. He is also a member of the NUJP chapter in the city.

He filed a report of the incident with the city police office on March 3.

Baguio City Police Director, Colonel Glenn Degawan Lonogan personally talked to the journalist. He directed the station in charge of the area to immediately investigate the incident.

As BCBC head, Quitasol is a vocal critic of the counterinsurgency strategy, “Dumanon Makitongtong” (Seek and Talk), which comes straight from playbook of Oplan Tokhang, the Duterte government’s anti-drug campaign.

Last January, the police and military invited Quitasol and other activists in the city to attend a “dialogue” under the Community Support Program White Area Operation (CSP-WAO).

The program is a component of the government’s Oplan Kapayapaan, targeting suspected sympathizers of communist rebels in conflict-affected areas.

The media groups called on Lonogan to “ensure the safety of every journalist in the city amidst these persistent attacks.”

“We urge Baguio City Officials, the police, and the national government to protect journalists and media workers from all forms of attacks,” they added.

In a statement, Undersecretary Joel Egco of the Presidential Task Force on Media Security (PTFoMS) reminded the media “to be more circumspect” in reporting the incident, stressing that it is still under investigation.

“As of this time, the PTFoMS and the local PNP in Baguio City are conducting an even deeper investigation on the incident which, if true, deserves the strongest condemnation from us all,” he said.  – Rappler.com