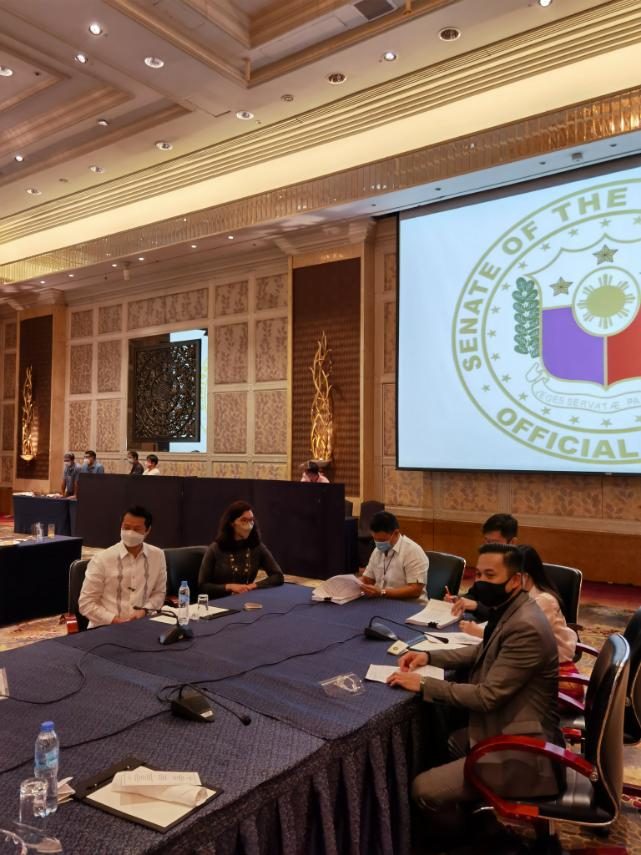 SIGNED. The heads of the Senate and House panels of the bicameral conference committee on the 2021 national budget bill sign their final version of the measure on December 9, 2020.

photo from the office of senator sonny angara

The bicameral conference committee approved the final version of the P4.5-trillion proposed national budget for 2021 on Wednesday, December 9.

The spending measure includes a total allocation of P72.5 billion for COVID-19 vaccines, much higher than the P2.5 billion originally proposed by the Department of Budget and Management (DBM).

Of the allotment for the vaccines, P2.5 billion is under programmed funds lodged with the Department of Health (DOH), while P70 billion is under unprogrammed appropriations, dependent upon the availability of government revenues.

Senator Sonny Angara, chairperson of the Senate committee on finance and head of the Senate contingent in the bicameral conference, said that although much of the budget for vaccines is unprogrammed, the country’s financial managers assured lawmakers that actual funds will become available.

“Ang akala kasi ng iba, unprogrammed [appropriations], hindi siya mapopondhan, but that’s not true. The probability of it being funded is large. We’re assured by the DOF (Department of Finance) na mapopondohan talaga ‘yun,” Angara told reporters after the bicameral conference concluded at the Makati Shangri-La Hotel before noon, Wednesday.

(Others think unprogrammed appropriations won’t get funded, but that’s not true. The probability of it being funded is large. We’re assured by the DOF that it will really be funded.)

The allotment for COVID-19 vaccines in the bicameral version of the budget bill is a tad lower than what the Senate version allocated: P8 billion under the DOH budget, and P75 billion under unprogrammed appropriations, for a total of P83 billion.

In its version of the budget bill, the House of Representatives raised the vaccine allotment from the original P2.5 billion proposed by the DBM, to P8 billion. This was carried over in the Senate version of the measure.

In drafting the budget for the vaccines, lawmakers relied on what the DOF could guarantee with revenues.

Besides the P72.5 billion in the budget bill, the Bayanihan to Recover as One (Bayanihan 2) Act provides for an allotment of P10 billion for COVID-19 vaccines. This puts the country’s total budget for the vaccines at P82.5 billion in 2021, Angara said.

Senate President Pro Tempore Ralph Recto earlier estimated that the government would need P100 billion to P150 billion to obtain vaccines, set up cold storage facilities for them, and administer them to about 70% of the population to attain herd immunity from COVID-19.

The Bayanihan 2 measure is set to lapse on December 19, so both chambers of Congress are planning to extend its validity until March or June 2021, said Angara and House appropriations committee head Eric Yap, who led the House contingent in the bicameral conference.

Lawmakers are also planning to extend the validity of the 2020 General Appropriations Act – the budget measure – until June or December 2021. This is because quarantine measures owing to the pandemic have delayed or prevented the implementation of many programs and projects funded under the 2020 national budget, Angara said.

The following are the 10 highest allocations under the 2021 General Appropriations Bill, as approved by the bicameral conference committee:

The DPWH budget under the bicameral version of the bill is higher than the P666.5 billion originally proposed by the Executive. This is despite calls from Senator Panfilo Lacson to slash it by P63 billion, following his exposé of questionable “skeleton” infrastructure projects in different provinces amounting to P68 billion.

The P19.1-billion budget of the National Task Force to End Local Communist Armed Conflict (NTF-ELCAC) is intact in the bicameral budget bill, Angara and Yap said.

Opposition senators earlier proposed to realign all or part of the anti-insurgency budget under the NTF-ELCAC to the funds for COVID-19 vaccines and calamity response.

Meanwhile, an alleged provision easing safeguards on the procurement of equipment for automated elections has been deleted in the bicameral version of the budget bill, Angara said.

Also, the 2021 budget bill is free from pork barrel, he added.

“I think we complied with the Supreme Court decision on the pork barrel. We avoided lump sums as much as possible. We tried to itemize them and have line items. The Supreme Court’s rule on that is you must not negate the Executive’s power to veto by lumping appropriations together,” the senator told reporters.

Both the Senate and House are set to ratify the bicameral version of the 2021 budget bill during session on Wednesday afternoon, after which it will be submitted to Malacañang for President Rodrigo Duterte’s approval. – with reports from Mara Cepeda/Rappler.com