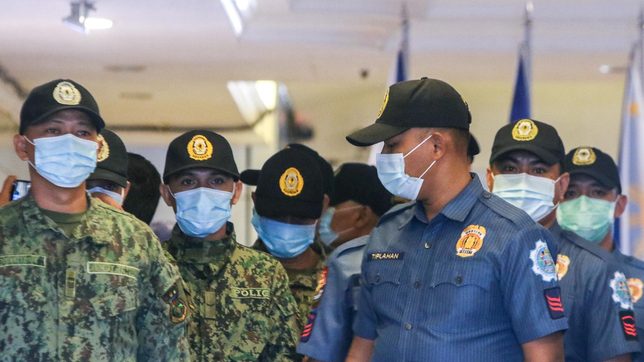 Nine police officers from the Sulu PNP appear at the National Bureau of Investigation headquarters in Manila on July 15, 2020, for the investigation on their involvement in the shooting and killing of four Army intelligence operatives in Jolo last month.

Facebook Twitter Copy URL
Copied
'It could be concluded that that the rifle recovered near Major Indammog's left hand was indeed planted,' says the NBI

The National Bureau of Investigation (NBI) filed on Tuesday, July 21, complaints of 4 counts of murder and 1 count of planting of evidence against 9 policemen from Jolo, Sulu, over a shooting incident last June which killed 4 army soldiers.

The soldiers died in an encounter at a police checkpoint in Jolo on June 29, with the police initially saying the soldiers took out their guns first, consistent with the ‘nanlaban’ or fighting back narrative of the controversial Philippine police.

The NBI transmitted its complaint to the Department of Justice (DOJ) on Tuesday, suing the following for murder and planting of evidence:

What the NBI said

It was earlier established that the soldiers’ car was flagged at the checkpoint, afterwhich they were asked for verify their identities to the nearest police station. The police report said it was one of the soldiers who got out of their Montero and pointed his gun at the cops.

But the NBI said that according to witnesses, “police officers immediately disembarked from the patrol car while their rifle (were) already pointed at the Montero, and strategically positioned themselves around it.”

Major Marvin Indammog, the leader of the troops, was initially described in the police report as the one who got out of the Montero to point his gun, but witnesses said he “raised his arms and stood near the back of the Montero as the police officers continued to point their firearms at him and the vehicle.”

“Police officers fired upon the Montero and Major Indammog who slumped on the road,” said the NBI.

“Sergeant (Eric) Velasco quickly came out of the left side of the vehicle, but likewise fell to the ground. After (a) series of gunfire, witnesses saw the victims lifeless,” said the NBI.

The other 2 killed soldiers were Captain Irwin Managuelod and Corporal Abdal Asula. Autopsies on the 3 soldiers showed gunshots were mostly on their backs, with one of them sustaining 8.

Asula was not autopsied because he had to be buried right away following Islamic rites.

A rifle was recovered near Indammog’s left hand.

Planting of evidence and neglect of duty

The NBI found basis to sue for planting of evidence because witnesses said “Major Indammog did not carry any firearm when he alighted the Montero.”

“Based on the additional pieces of evidence, it could be concluded that the rifle recovered near his left hand was indeed planted,” said the NBI.

The NBI said the 4 soldiers were dispatched that day to follow leads of “probable locations of the alleged two female sucide bombers and the maker of their suicide vests.”

The soldiers were wearing plain clothes.

The NBI said that Bawayan, Annayo and Corcino should have informed the policemen under them of this army operation.

“We agree that the failure of the Sulu Police Provincial Director, Police Drug Enforcement Unit Chief and Jolo Chief of Police to inform their subordinates of the active operation by military constitutes gross negligence under the doctrine of command responsibility defined in Executive Order 226,” said the NBI. – Rappler.com