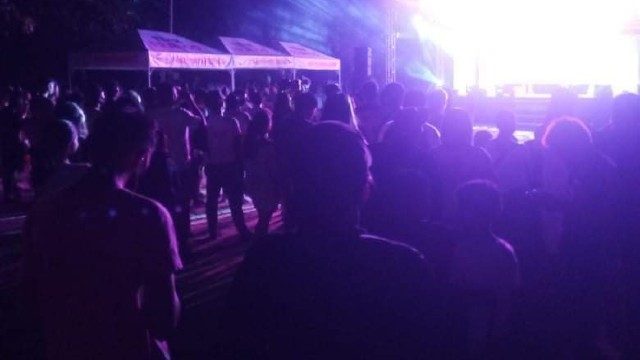 PARTY. Residents party in Camotes Island, amid the threat of the COVID-19 delta variant

The Department of the Interior and Local Government (DILG) said it was investigating a beach party held last July 10 at San Francisco, Camotes Island, Cebu, and allegedly sponsored by Cebu local executives.

Interior Undersecretary Jonathan Malaya confirmed to Rappler Tuesday, August 17, that the DILG was looking into the gathering attended by at least 700 participants coming from different places in Central Visayas.

“We have asked our DILG regional office to investigate,” Malaya said.

The Philippine National Police (PNP) likewise said it was probing the event which was also attended by other politicians aside from the alleged hosts.

“We will abide by the directive of our SILG Secretary Eduardo Año to investigate the said gathering which may have violated minimum public health safety standards and quarantine protocols and could have been a super spreader event,” Philippine National Police (PNP) chief General Guillermo Eleazar said.

Eleazar reminded the public that the coronavirus pandemic was not yet over and mass gatherings or potential super spreader events were prohibited.

“This incident was reported by a mere concerned citizen. We urge the public to continue reporting to authorities incidents where minimum public health safety standards and quarantine protocols are violated,” Eleazar said.

The police chief also assured the public that politicians involved, including the organizers and those who partied at the beachfront, were not exempted from pandemic restrictions.

In May 2020, retired police general Debold Sinas, the former PNP chief, was also in hot water for holding a birthday party amid a COVID-19 surge. Those who organized that event for Sinas tried to downplay the incident by calling it as a mere mañanita.

While Año said at that time that the party was a “no-no,” Sinas was never punished for that violation of health protocols.

When asked about what his comments were on the beach party incident, Presidential Spokesperson Harry Roque said the quarantine classification during that time must be checked first because he did not know what it was.

While Camotes Island was under modified general community quarantine (MGCQ) when the event was held on July 10, numerous photos and video footages were posted online showing participants disregarding minimum public health standards such as wearing of masks and social distancing.

The island party followed the Friendship Fun/Ride that was held to “fulfill Congressman Frasco’s intention of bringing sports tourism to the Camotes Islands.”

Frasco is a son-in-law of Cebu Governor Gwen Garcia.

(We followed the efforts of Governor Garcia in reopening our tourism industry. One of the main industries here in Camotes is Tourism. So they’ve been really affected by the pandemic. And I thought this is a nice way of [reviving it.])

Rappler reached out to Frasco for their side via SMS, phone call, and Viber but he has not responded as of this posting.

Central Visayas, where Camotes Island belongs, has been in a series of heightened quarantine classification because of increasing COVID-19 cases.

A resident who did not want to be identified told Rappler said the increase in cases started after the party happened.

The regional economic center, Cebu City, also faces its worst surge since the beginning of the coronavirus outbreak in 2020 according to a health think tank OCTA Research group. – Dwight Angelo de Leon/ Rappler.com