Elect a Duterte or Poe for president, Joma Sison might come home

Dec 28, 2015 8:00 AM PHT
Fritzie Rodriguez
Facebook Twitter Copy URL
Copied
The founder of the Communist Party of the Philippines, who has been in asylum in The Netherlands since 1992, shares his impressions of the 5 major contenders for Philippine president 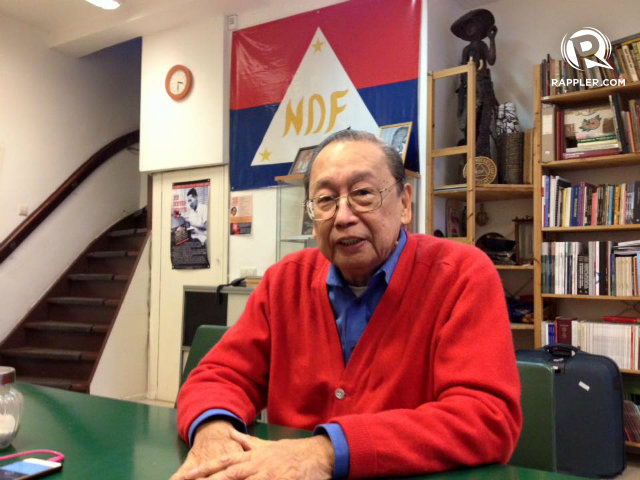 UTRECHT, Netherlands – While a leftist bloc in the Philippine Congress has endorsed a presidential candidate for 2016, and the New People’s Army (NPA) just announced that it will again impose permit-to-campaign fees on candidates, communist leader Jose Maria Sison said he does not support anyone in particular.

“The NDF (National Democratic Front) cannot support anyone, it’s against the ruling system. But the NDF is pleased that all the major candidates are for the continuation of the peace negotiations,” he said in a recent interview with Rappler at the NDF information bureau here, which also serves as his home.

But there are at least two presidential aspirants whom he thinks will entice him to come home to the Philippines to talk peace if either of them wins: Davao City Mayor Rodrigo Duterte and Senator Grace Poe.

Then again, Sison – founder of the Communist Party of the Philippines (CPP), and also chief political consultant to the NDF – is wary of the automated electoral system, which the Philippines started using in 2010. He said the machines could be “pre-programmed” and could be used in tampering the election results.

What does he think of the 5 major contenders for the presidency?

“Unless he will be innovative, he will follow the tuwad na daan (crooked path), right? If he wants to play copycat to [President] Noynoy [Aquino], that means to say, he’ll continue the old system. But I don’t know, he might be more intelligent than Noynoy.”

Sison argued that Aquino only “sits back” and lets whoever he appoints, such as Presidential Adviser on the Peace Process Teresita Quintos Deles, decide for him.

Commenting on the Wharton graduate controversy, Sison said the whole issue is an “indication of how low is the quality of the debate.”

“Parang labanan ng mga bata (Like a fight among children).”

Sison observed that Roxas believes he will win if he boasts of continuing the Tuwid na Daan (straight path) slogan of Aquino, but Sison calls this move a “kiss of death.”

On Roxas’ similarity to President Aquino, Sison said the candidate lacks heart and compassion for the poor. Roxas only mimics the poor with his Mr Palengke commercials, he said.

“Makabayan is committed to Grace. She has made an agreement, general terms of alliance, with Makabayan: upholding national sovereignty and territorial integrity, democracy and human rights, industrial development with land reform. So they agreed on that.”

Makabayan is a bloc of leftist groups associated with the national democratic movement in the House. Bayan Muna party-list Representative Neri Colmenares, a Makabayan bloc member, is running for senator under the Poe ticket.

Sison acknowledged that Poe is ahead of all other candidates. The question, however, is whether she will honor the agreement once she is in power, he said.

On the question on Poe’s citizenship, Sison said he leans toward the opinion of lawyer Katrina Legarda that foundlings are to be recognized as natural-born Filipino citizens.

Unknown to many, the Davao City mayor was Sison’s former student at the Lyceum.

He shared that when Duterte was still “atras-abante”  (undecided) about running for president, his staff would visit Sison in the Netherlands.

He clarified, however, that the NDF, CPP, and the NPA do not endorse candidates.

“But, of course, we classify the candidates, parties, and coalitions. It has its own way of reckoning or weighing the characteristics and values of the candidates – who are easier to talk to, who has more potential to agreeing to just peace,” Sison explained.

It is unfortunate, said Sison, that the media cannot detect Duterte’s sarcasm and jokes during interviews.

Sison also praised Duterte for having strength of character and for standing against the Americans. For example, Duterte turned down the request of Americans to put up a drone center in Davao.

Sison, however, admitted that he “does not know how true” the claims are against Duterte regarding human rights violations.

“She does not have the organization, and everybody suspects she has not overcome her health problem,” Sison said. “But you don’t know what can happen if Roxas, Binay, and Miriam would be left, you cannot tell.”

Sison observed that while the corruption allegations have decreased Binay’s numbers in surveys, however, the Vice President still maintains a big following at “any weather.”

If Duterte and Poe are disqualified, where else will their followers go? They might go to Binay, Sison said.

All of them of ‘low quality’

In summary, Sison said, all the candidates are of “low quality.”

Still, Sison, who has been on political asylum in The Netherlands since 1992, said the chances are high for him to someday return to the Philippines if there is a decent president “willing to negotiate seriously.”

“If the likes of Duterte or Grace were to be president, I can go home.” – Rappler.com