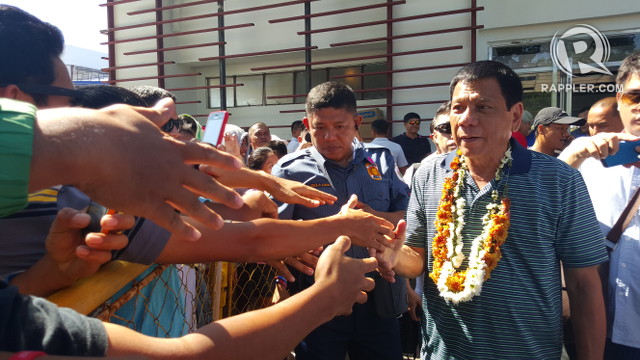 MANILA, Philippines – Rodrigo Duterte is turning 71 in the middle of the campaign season, on Monday, March 28, to be exact. How does he plan to celebrate?

“I’ll sleep the whole day. That’s the tradition. I have never celebrated a birthday in my life,” he told reporters in Camiguin on Wednesday, March 23.

The past few months have been jam-packed for the Davao City mayor who dove right into his first presidential campaign after filing his certificate of candidacy for president.

But on Monday, Duterte wants to leave the campaign trail behind and spend the day at home.

“I spend the day alone and I pray then, [see my] children,” he said.

Duterte was born on March 28, 1945 in Maasin, Southern Leyte. Maasin residents sang him their birthday greeting in advance when he visited the city last Wednesday. (READ: 22 things to know about ‘Duterte Harry’)

(Because they said they’d visit me on my birthday so I brought you to a rigmarole so you would not catch me there.)

He has always kept his birthday “as a very private matter. Natutulog lang po ako (I just sleep).”

A staff member of the Davao City government told Rappler that Duterte’s birthday is something like a holiday for the city government employees.

It will be Duterte’s first birthday as a national figure, a status that has brought him one regret: the loss of privacy.

“I’ve kept a low profile all these years. Were it not for the fact that I’m running for president in 2016, hindi niyo ako makilala ‘pag maglakad (you wouldn’t recognize me if you see me walking),” he told University of the Philippines-Los Baños students earlier this month.

“Ngayon lang medyo nagmumura ang mukha ko (Now is the only time my face has become a cheap commodity) and one regret I have really is the loss of privacy,” he said.

Among the 5 presidential bets, Duterte is the second oldest after Vice President Jejomar Binay who is 73 years old. After Duterte, Senator Miriam Defensor Santiago is the most senior at 70 years old. – Rappler.com