A second Duterte by his side: Bongbong Marcos moves closer to unification Facebook Twitter Copy URL
Copied
(1st UPDATE) Is he endorsing Marcos? Paolo did not grant an interview with reporters, neither did Sara. But in a message to state-run PTV News, Paolo said 'yes' when asked if Marcos is now his presidential bet.

BATANGAS, Philippines – Ferdinand “Bongbong” Marcos Jr has managed to get another Duterte on his side.

The eldest of the Duterte children – Davao City 1st District Representative Paolo Duterte – accompanied his sister Sara to a caravan at the Batangas provincial capitol on Thursday, December 2. He sat beside Marcos on stage during the event.

Is he endorsing Marcos? Paolo did not grant an interview with reporters, neither did Sara. But in a message to state-run PTV News, Paolo answered “yes” when asked if Marcos is now his presidential bet.

In a statement Thursday through her spokesperson Mayor Christina Frasco, Sara said Senator Bong Go’s announcement of withdrawing from the presidential race should now unite the administration and its allies.

(The BBM-Sara Uniteam continues its campaign for unity so we could successfully achieve our goals for the country.)

Little by little, day by day, unification seems now within reach of the son of dictator. The last piece of the puzzle being the current overlord – President Rodrigo Duterte. But the President was reportedly upset over his daughter Sara’s settling to run for vice president. He had called Marcos a “spoiled child” and a “weak leader.” ‘Impractical’ not to support BBM

Marcos has remained courteous towards Duterte despite the President’s histrionics in the political melodrama. Among the broadsides by the Duterte patriarch described an unnamed presidential candidate as a cocaine-user with a famous father.

It’s Senator Imee Marcos who said their family was “absolutely heartbroken by the almost violent reaction of the President.” 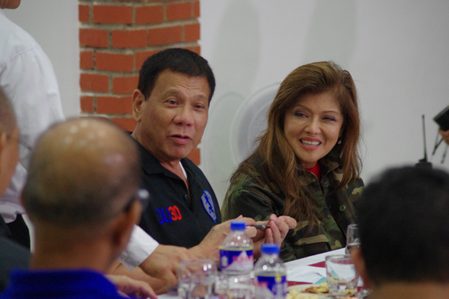 Duterte’s former spokesperson, Harry Roque, said he had been pushing the President to endorse Marcos. The Marcos camp has been consistent that it wanted the President on their senatorial slate.

“Many, if not all, of the President’s supporters will find it difficult not to support the choice of Mayor Inday Sara,” Roque said on the sidelines of one of the events in Batangas City.

Roque, who is running for senator under the Peoples’ Reform Party (PRP), was first to be named in the Marcos-Duterte slate, composed of only two so far. Uniteam’s other senatorial bet is Jinggoy Estrada.

Duterte’s former cabinet secretary, the activist Leoncio “Jun” Evasco, has taken his oath as member of PRP and was at the Batangas Capitol on Thursday. But unlike Paolo, Evasco didn’t go on stage and kept his distance from the flurry of it all. Evasco was almost invisible were it not for Roque who announced his presence.

Is Evasco, a victim of torture during the Martial Law dictatorship, endorsing Marcos?

‘Not guilty by association’

Roque’s record as a human rights lawyer includes pushing for a bill that sought to make permanent the human rights claims board, which institutionalized the reparations for Martial Law victims.

On Thursday, Roque delivered an oft-heard defense of Marcos: That he was just 15 years old in 1972, and that “I cannot consider that the sins of the father is the sins of son.”

Marcos has neither acknowledged nor apologized for the atrocities committed during his father’s dictatorship.

“What I’m saying is no one should be guilty by way of association,” said Roque. And besides, said Roque, “wala namang ibang umampon sa akin, sino ba naman ako para humindi? (no one else adopted me as their candidate, who am I to say no?)”

A faction of Partido Federal

Threatening to spoil the image of unification is the former chairman of Partido Federal ng Pilipinas (PFP), who filed a challenge against Marcos’ party nomination. PFP is the young party carrying the candidacy of Marcos.

Former PFP chairman Abubakar Mangelen “and the original PFP officers” filed before the Commission on Elections (Comelec) Thursday a petition to challenge the Certificate Of Nomination and Acceptance (CONA) given to Marcos.

The faction is associated with former agrarian secretary John Castriciones, who is running for senator under PDP-Laban. They alleged that the issuance of CONA to Marcos was “unauthorized, unilateral and illegal.”

PFP’s current secretary general Thompson Lantion sent out a statement saying the group of Mangelen and Castriciones had already been disowned by President Duterte.

“There is an open investigation of the PNP CIDG in Camp Crame against these illegal activities of MRRD NECC,” said Lantion, who said that Mangelen was unseated in the September 2021 convention of the party that chose Marcos as standard-bearer and consequential chairman.

Despite all these, Marcos and Sara continue to behave like frontrunners, dodging interviews to stick to the tried and tested political maneuver of “less talk, less mistakes.”

For them, achieving unity will mean a return of Marcos in Malacañang, with a Duterte by his side. – With reports from Bea Cupin/Rappler.com