Rich in local drama, and in votes: Marcos-Duterte guns for QC 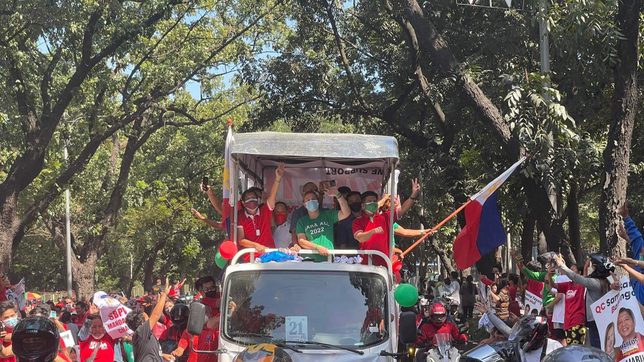 Facebook Twitter Copy URL
Copied
In full display during the big Quezon City motorcade was the rivalry between Mike Defensor and incumbent mayor Joy Belmonte, who is yet to endorse a president. Up for grabs in Quezon City are 1.3 million votes.

It was a traffic-stopping turnout for the Quezon City motorcade of Ferdinand “Bongbong” Marcos Jr and Mayor Sara Duterte on Wednesday, December 8, whether it was just 6,000 people as the police estimated or “hundreds of thousands” according to the campaign team.

But the motorcade had all the ingredients of the unfolding local politics melodrama – the bitter rivalry of mayoral candidate Mike Defensor and incumbent Mayor Joy Belmonte.

QC was perhaps an all too important stop despite the persistent bickering of the local rivals.

Marcos won here during the vice presidential elections in 2016, and so did President Rodrigo Duterte.

And up for grabs are 1.3 million votes from the most vote-rich city in the Philippines.

Apologies for the traffic

Even as Defensor and his allies continued their tirades against Belmonte during the motorcade, the Marcos camp opted to be neutral.

In a statement shortly after the motorcade was done, Marcos’ spokesperson Vic Rodriguez said they thanked “Mayor Joy Belmonte and other city officials, the caravan organizers, and the residents, regardless of their political belief, for their support.”

There was a dispute earlier over the venue for the Marcos-Duterte rally. Defensor claimed Belmonte purposely did not allow use of a part of the Quezon City Memorial Circle because of partisan politics. But Belmonte said city protocols dictated that rallies be held in a covered court instead.

On Wednesday, while waiting for Marcos and Duterte to arrive at their convergence point along Commonwealth avenue, Defensor’s allies were riling up the crowd by saying there was no way they would all fit in Belmonte’s covered court.

The Quezon City local government issued an advisory midday suggesting alternate routes for vehicles because the Commonwealth-Quezon Avenue stretch was clogged. The advisory warned that the jammed route would take five hours to traverse, when it would usually just have been a one-hour trip.

The QC government also said local organizers did not coordinate.

Rodriguez responded by apologizing for the traffic they caused.

“We never anticipated that the carefully laid down preparation exerted by the organizers will be overwhelmed by the massive number of supporters who graced the occasion,” said Rodriguez.

A second Duterte by his side: Bongbong Marcos moves closer to unification Who is Belmonte endorsing?

Belmonte is yet to endorse a president.

The mayor told Rappler on Wednesday that her party Serbisyo sa Bayan Party (SBP) has not renewed its alliance “yet” with Duterte’s Hugpong ng Pagbabago (HnP).

“SBPs alliance with HNP was in force only for the 2019 elections. We have not renewed our alliance yet for this coming elections,” said Belmonte.

Belmonte earlier said that she was still “in the process of selecting its presidential candidate in the 2022 elections.”

Incidentally, Belmonte was previously the Metro Manila chairman of the Partido Federal ng Pilipinas (PFP), which eventually carried Marcos’ presidency. But she said she “assumed” she was no longer part of PFP.

“I was never formally removed as NCR Chair by PFP but I assume I am no longer part of the party as I understand there is already a new NCR Chair,” said Belmonte.

Although the Belmontes are stalwarts of the Liberal Party, Joy joined PDP-Laban under President Rodrigo Duterte and allied with HnP in the 2019 elections, hosting administration candidates like Bongbong’s sister, Imee.

In the middle of all these local political twist and turns, what did Wednesday’s motorcade mean for Marcos and Duterte?

In their own words, it was “a show of force.”

– With reports from Dwight De Leon/Rappler.com