Vice presidential candidates pose for a photo opportunity with Commission on Elections officials before the start of the Comelec debates on March 20, 2022. Angie de Silva/Rappler

Facebook Twitter Copy URL
Copied
'With merely the clout of the Office of the Vice President, you’ll be able to do so many things,' says vice-presidential bet Tito Sotto in Comelec's PiliPinas debate

MANILA, Philippines – In a debate sans the front runner, vice-presidential hopefuls talked about the undefined role of the second highest post in the land, and whether a president and vice president should be elected as a tandem.

A question on possibly expanding and specifying the role of the vice president was what opened the Commission on Elections (Comelec)’s PiliPinas vice-presidential debate on Sunday, March 20. Seven out of nine candidates attended the debate – Buhay Representative Lito Atienza is recovering from surgery while Davao Mayor Sara Duterte, who leads preference surveys, had said that she would skip debates altogether.

Senators Tito Sotto and Kiko Pangilinan both pointed out that while the Constitution leaves the role of the vice president undefined, it’s up to the incumbent to make the most of the office.

(The vice president really shouldn’t be a spare tire if you know what you need to do, even if you aren’t given a post. With merely the clout of the Office of the Vice President, you’ll be able to do so many things.) 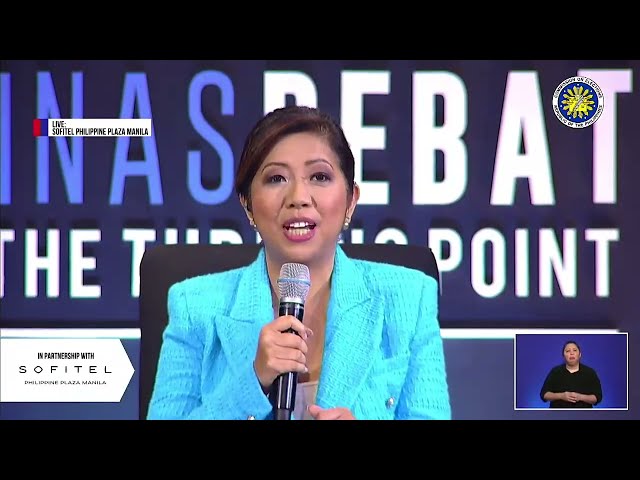 Emmanuel Lopez, Labor Philippines bet, didn’t really say how the role could be expanded but said – repeatedly – that the “qualifying factors” for the vice president to assume the highest post in the land, should the need arise, must be defined.

Willie Ong, Manila Mayor Isko Moreno’s running mate, said the vice president should be given a post, highlighting his would-be Cabinet position should he and Moreno win: health chief or head of the government’s pandemic response.

Walden Bello, who is running alongside Labor Leader Leody de Guzman, did not say how he’d want the position’s role better defined, but said he’d want to head the finance department. The former legislator also hit the current finance chief, Carlos Dominguez, for supposedly “misusing” his power by “giving so many benefits” to foreigners instead of Filipinos.

Rizalito David offered took a more extreme position, going beyond Constitutional amendments to define the role of the vice president. David said he wants a shift to a parliamentary system.

Usually, the Philippine president and vice president come from different parties – a point that 2022 vice-presidential brought up during the debate, with some suggesting that the two highest posts in the land should be elected as a tandem.

The result of a president and vice president from different parties are mixed, if recent history is any indication.

The late President Benigno Aquino III and Vice President Jejomar Binay were from different slates, but have a long personal history. Binay was appointed Makati City mayor by Aquino’s mother, democracy icon Cory Aquino. While Binay was not part – and often at odds with – the ruling Liberal Party, he only resigned in mid-2015, partly because he was always the “odd one out” in the Cabinet and also because he was gearing up for a bid for the presidency in 2016.

After the 2016 elections, Robredo was appointed President Rodrigo Duterte’s housing chief but resigned barely six months later after she was told to stop attending meetings. She was again appointed his anti-drugs body co-chair but was removed barely a month later. Duterte and Robredo are from different political parties and ran under different tickets in 2016.

In both recent cases, the Vice President was seen as the de facto leader of the opposition.

Ong, Pangilinan, and Carlos Serapio were in favor of electing the president and vice president as a tandem.

Both Sotto and Bello didn’t see a disadvantage to having a president and vice president from different parties, seeing it as a chance at “checks and balances.” “Well, I think that it is good, you know, to have two candidates, you know, maybe from opposite parties. So, I don’t see that as really bad. I think it can create some sort of good dynamics in terms of, you know, the executive,” said Bello before he criticized Duterte for skipping the debate.

David still pushed for a parliamentary form of government while Lopez went on to insist on the “qualifications” of a vice president should they need to assume the presidency.

Asked by moderator Ruth Cabal on whether the vice president should be given a Cabinet post, David, Lopez, and Ong did not answer the question directly, instead expounding on their own expertise and the posts they would occupy in a possible Cabinet.

Pangilinan, meanwhile, disagreed with making a Cabinet appointment compulsory, pointing out that a president should be given space to pick however they trust to form their Cabinet. – Rappler.com