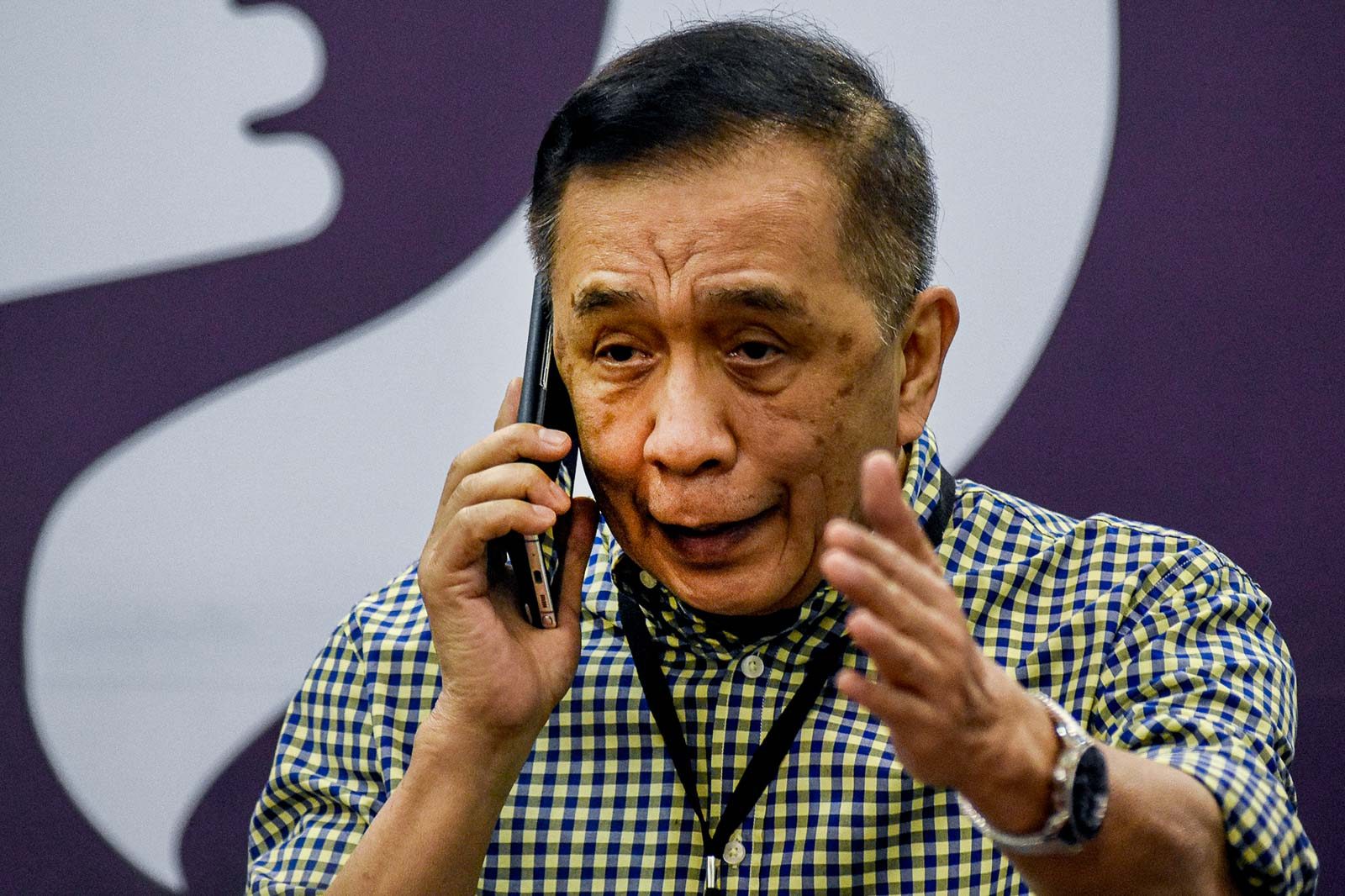 POLL CHIEF. Commission on Elections Chair Saidamen Pangarungan presides over the canvassing of votes for senators and party-list groups at the PICC in Pasay City.

MANILA, Philippines – At least two local politicians in Lanao del Sur accused Commission on Elections (Comelec) Chairman Saidamen Pangarungan, a native of the province, of meddling in races involving his brother and nephew.

The camp of Tubaran mayoral candidate Khaledyassin Papandayan refiled with the Comelec on Wednesday, May 11, a request for Pangarungan to inhibit from functions involving Lanao del Sur, according to two Comelec insiders. The original request was filed by Khaledyassin’s father, Bayang mayoral candidate Mauyag Balt Papandayan Jr., through a March 31 letter seen and vetted by Rappler.

The list of areas under Comelec control – which included Tubaran – was dated March 25, but was released by the Comelec only on April 19, despite multiple attempts by reporters to obtain the list before this date. A week before the release, on April 11, the Comelec announced a controversial 4-3 vote to allow Pangarungan to place areas under Comelec control on his own.

Pangarungan, in a text message to Rappler on Thursday, May 12, dismissed accusations of bias as “baseless.” He also refused to inhibit from Comelec functions involving Lanao del Sur.

The 1993 Comelec Rules of Procedure state that “no member shall sit in any case in which he or his spouse or child is related to any party within the sixth civil degree or consanguinity or affinity.”

Pangarungan himself was once a local politician in Lanao del Sur, serving as governor from 1988 to 1992. His last government position, before he became the second elections chief from Mindanao, was secretary of the National Commission on Muslim Filipinos.

A two-month-old Duterte appointee, Pangarungan has yet to be confirmed by the Commission on Appointments.

Papandayan claimed Moran has “close ties to the family of interim chairman which is of public knowledge throughout the community.”

“This act of Chairman Pangarungan lays a cloud of doubt as to the wisdom and purpose for such ‘concurrent’ designation of Atty. Moran considering the availability of other provincial election supervisors in the Bangsamoro Autonomous Region in Muslim Mindanao,” he said.

“It also raises suspicion of the opposition candidates that such act was made for the purpose of giving advantage to his brother, the incumbent mayor of Bayang,” the letter added.

The senior Papandayan also questioned why provincial election supervisor Moran visited the town of Tubaran “under the guise of inspection of voting centers” and had with her Balt’s relatives.

“We are respectfully praying for the Commission en banc to inhibit Chairman Pangarungan from performing not only quasi-judicial or judicial functions, but also administrative functions over the province of Lanao del Sur, more specifically and importantly to the municipalities of Bayang and Tubaran,” Papandayan said through his legal counsel in March.

Responding to Rappler on Thursday, Pangarungan defended his appointment of Moran.

He also disputed other allegations made in the request for inhibition.

“The allegations of bias from losing candidates are baseless. There is absolutely no proof of bias on my part,” he asserted. “There is no valid ground for me to inhibit over my province in Lanao del Sur. All my actions there are aboveboard.”

The Comelec already declared failure of elections in 12 barangays in Tubaran and two other towns in the province due to stolen official ballots, violence resulting to damage of vote counting machines (VCMs), and a policeman stabbed while protecting VCMs.

As of 9 pm on Wednesday, Papandayan was leading the mayoral race by 12 votes against Pangarungan’s nephew, but only 37% of precincts were transmitting results.

In Bayang, Pangarungan’s brother Balt was leading the race against Papandayan by 2,000 votes, but only 48% of precincts have transmitted results based on the unofficial count. – Rappler.com