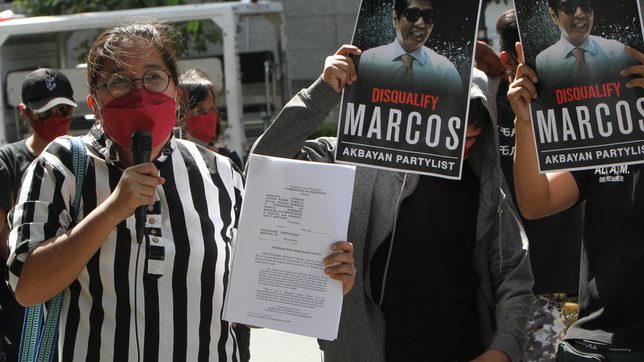 The Commission on Elections (Comelec) has issued summons to the late dictator’s son and namesake Ferdinand “Bongbong” Marcos Jr. over three more petitions against his 2022 presidential bid.

The disqualification cases are those filed by:

“The summons for the three cases filed against BBM have already been sent to the e-mail addresses of the [election officers]. The EOs were directed to print, personally serve the summons to respondent BBM, and to submit affidavits of service,” Commissioner Rowena Guanzon said on Tuesday, December 21.

Guanzon is the presiding commissioner of the Comelec’s 1st Division, which is handling the three disqualification cases against Marcos.

She is joined by commissioners Marlon Casquejo and Aimee Ferolino, career officials from Davao who were appointed by President Rodrigo Duterte. Guanzon was appointed by the late former president Benigno Aquino III.

Upon receipt of the summons, Marcos will be given five days to submit his answer to each petition.

The preliminary conferences of the said cases are set on January 7, 2022, Guanzon added.

It is worth noting that Marcos failed to submit his reply to a petition seeking to cancel his certificate of candidacy within five days back in November, but the Comelec’s 2nd Division extended its “non-extendible” deadline anyway.

The 2nd Division had argued that the poll body “has the authority to suspend the reglementary periods provided by the rules in the interest of justice and speedy resolution of the cases.”

What are the petitions about?

The petitions filed by Calleja’s group, Akbayan, and Mangelen all have a common denominator – they cited Marcos’ tax conviction in the 1990s as basis for his disqualification under Philippine laws.

Mangelen, who claims to be the “duly elected chairman of the PFP,” also wants Marcos’ certificate of nomination and acceptance nullified. He argued that an illegitimate faction of the PFP issued Marcos his CONA without his consent.

In a tweet on Tuesday, Guanzon said that the “Akbayan petition looks better than the others.”

Aside from the three cases, there are at least three more unresolved petitions seeking to block Marcos’ 2022 bid with the Comelec’s 2nd Division.

Marcos has downplayed these efforts against his candidacy as nuisance and propaganda supposedly orchestrated by critics. – Rappler.com