ABRA, Philippines – After scheduling a tour targeting the bailiwick of frontrunner former senator Ferdinand “Bongbong” Marcos Jr, Senator Panfilo Lacson dropped all of his sorties in the span of two days in Ilocos Region.

In Lacson’s original schedule set days before, he would spend Tuesday, April 26, packed with meetings with politicians and sorties in four different provinces – three of them in Ilocos. When the day came, only one province remained – Abra in the Cordillera Administrative Region. 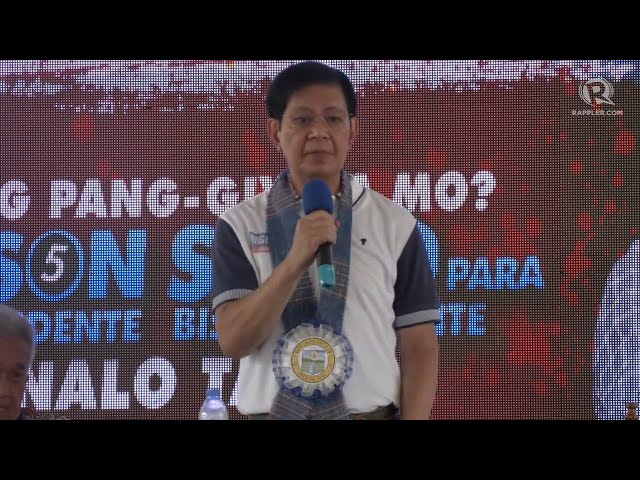 Originally, Lacson planned on meeting the governor of La Union in the morning, Francisco Emmanuel Ortega III, then head to the market of San Fernando town for a tour with the locals.

After the market tour, Lacson was set to meet Ilocos Sur Governor Ryan Singson in a restaurant along the iconic Calle Crisologo in Vigan.

He was then set to go to Bangued in Abra to meet with Bishop Leopoldo Jaucian before going to a town hall meeting with tobacco farmers in a nearby hotel.

He would have capped off his tour in the north with a visit to San Nicolas, the municipality right under Ilocos Norte’s capital, Laoag City. Lacson was set to meet the town’s mayor, Alfredo Valdez Jr., before going to another town hall meeting in the San Nicolas Old Plaza.

But on the morning of April 26, only the Abra stop remained. The La Union and Ilocos Norte legs were cut off the night before, then the Ilocos Sur lunch was canceled in the morning, hours before the anticipated meeting.

“I requested to call it off because we lacked time, considering the Bersamins, the Reporma candidates in Abra who decided to stick with me are hosting an early lunch,” Lacson said in a message to reporters.

Lacson was referring to local officials who continued to support his presidency even after he was dropped by Partido Reporma, the Pantaleon Alvarez-controlled party that originally backed him for the 2022 polls but switched midway to Vice President Leni Robredo.

His Ilocos Region campaign would have followed his sorties in Luzon, where he held town hall meetings in Tarlac and Pangasinan. Lacson dropped all the remaining Ilocos Region sorties after visiting only one province – Pangasinan.

Lacson’s campaign could have been a bold incursion – a direct challenge to the myth of the “Solid North.” In the end, Lacson’s campaign was reduced to one sortie just at the doorstep of Marcos country. – Rappler.com