PRESIDENTIAL BET. Vice President Leni Robredo arrives without much fanfare at the Carangcang Elementary School to cast her vote. She falls in line along with other voters waiting for their turn.

Robredo, who wore a blue blouse, arrived at the Carangcang Elementary School around 9:50 am on Monday, May 9, and joined the long queue while waiting for her turn to vote. 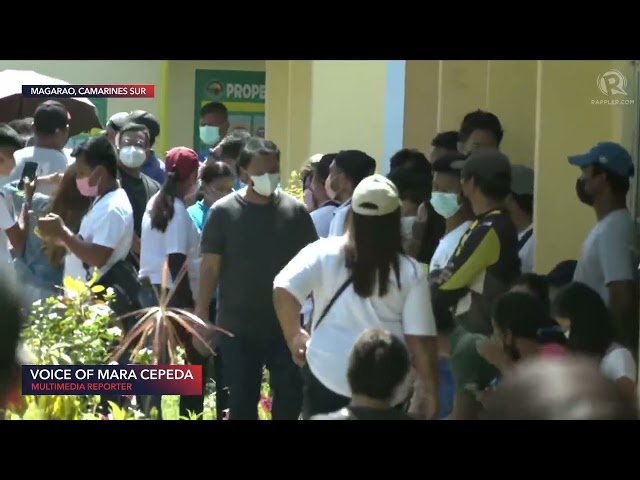 She got to fill her ballot nearly two hours later.

After she voted, Robredo in an ambush interview expressed concern over the rampant reports of irregularities such as malfunctioning vote-counting machines, with voters being asked to leave their ballots behind or wait until the machines are fixed.

(The reports all over the country are concerning. The last thing we want is the integrity of this election to be trampled on, because that’s where trouble will start. If there are actors with plans, I hope they don’t go through with it.)

Robredo said authorities must show that they are on top of the situation, “because the trust of the people towards the government depends on this,” she said in Filipino.

“Huwag matakot. Marami tayong magtutulungan. Kailangan lang ma-document natin lahat,” she said. (Do not be afraid, there are a lot of us helping each other. We just need to document everything.)

Robredo mentioned her camp had channels where Filipinos can report irregularities in the conduct of the election.

Robredo is running on an anti-corruption platform in the high-stakes 2022 elections, promising to lead a clean and honest government that knows no sacred cows and includes the last, the least, and the lost at every step of policy-making.

Robredo was born and raised in Naga City, the place where she and her late husband, longtime mayor and former interior secretry Jesse Robredo, raised their children Aika, Tricia, and Jillian.

The Vice President had been a registered voter in Naga City for most of her adult life, but she transferred her registration to Magarao on the eve of the filing of candidacies for the 2022 elections on September 30, 2021.

That move made her allies and critics alike wonder if she would still gun for the presidency or just run for Camarines Sur governor, as those living in independent component cities like Naga cannot vote nor run for any provincial post. At the time, Robredo was still in deep discernment about her electoral bid in 2022. She would later announce her decision to run for president on October 7, 2021, the second to the last day before the deadline.

Though she may be a reluctant candidate in the beginning, Robredo hit the ground running after declaring her presidential bid, her weekly schedule often filled to the brim with grand rallies, meetings, and dialogues with different sectors, including trips to remote areas to illustrate her campaign promise of bringing the government to all Filipinos, wherever they may be. (READ: Robredo ends campaign with faith: ‘Natutunan natin, walang imposible’) 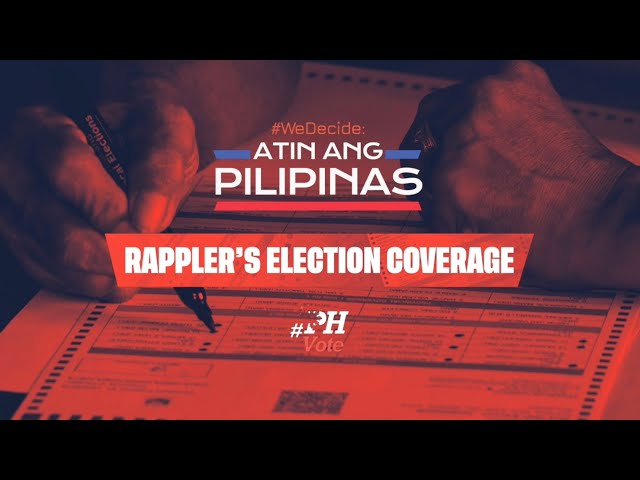 Robredo stayed relentless during the official campaign period, hopping from one province to another in a span of a week. The presidential contender’s day usually starts early in the morning and could last until midnight.

Robredo barely took rest days, knowing just how far she was trailing behind the survey frontrunner, the late dictator’s son Ferdinand “Bongbong” Marcos Jr. She tried to challenge Marcos to a one-on-one debate, but he refused.

Her hard work did not go unnoticed by her “kakampink” supporters, however. In the last few weeks of the campaign, Robredo saw a groundswell of support for her presidential bid, with tens of thousands of attendees becoming a staple in her grand rallies across provinces – even in known enemy bailiwicks.

As Robredo’s campaign surged in the last few weeks before the May 9 elections, attacks against her and her family also ramped up.

Robredo’s camp and political pundits believe the intensified black propaganda against the lone female presidential candidate and her family signifies Robredo’s growing momentum in the crucial homestretch of the campaign. – with reports from Michelle Abad/Rappler.com