Robredo challenges Marcos to one-on-one debate: ‘We owe it to the people’ 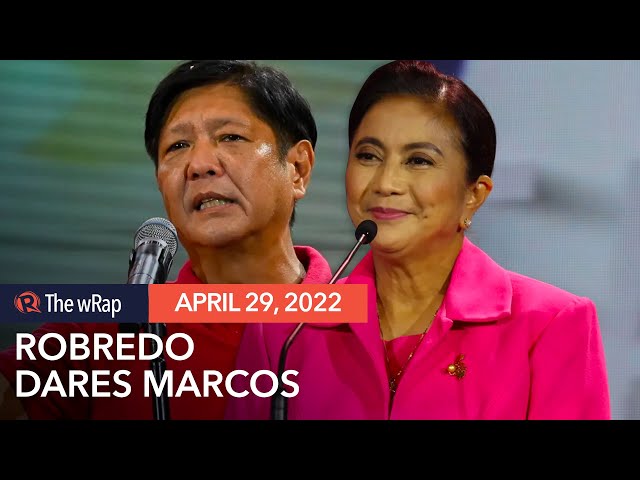 In a statement on Friday, April 29, the lone female presidential candidate said that at this point in the campaign, only the survey frontrunner Marcos has refused to join debates that were previously attended by all 10 contenders for Malacañang.

Robredo, who has been polling second in major pre-election surveys that Marcos continues to dominate, said it is about time he faces the controversies that have long hounded him and his family.

(I am inviting Mr. Marcos to debate with me, to give the people a chance to face him and ask about the controversies surrounding him. We owe it to the people and to our country.)

Marcos participated twice in a debate organized by SMNI News, the media outfit owned by fugitive preacher Apollo Quiboloy. Quiboloy, who is wanted in the United States for sex trafficking charges, has endorsed Marcos for president.

None of the other leading candidates attended the debates organized by SMNI, deemed to be friendly to Marcos and has acquiesced to his demands to skip the hard questions.

Of the 10 presidential candidates, only Marcos has snubbed the past two debates organized by the Commission on Elections (Comelec). Marcos also did not join the debate mounted by CNN Philippines.

Robredo earlier roasted Marcos for his debate absence, saying true leaders show up in the most difficult times.

There would have been a third installment on April 24, but the Comelec had to cancel it after the debate contractor amassed a P14-million debt to Sofitel, where the debates were being held.

Comelec later decided to just partner with the Kapisanan ng mga Brodkaster ng Pilipinas to tape a candidates’ forum from May 2 to 6, with each participant entitled to a one-hour interview.

Marcos camp: ‘It will never happen’

But Marcos’ spokesperson Vic Rodriguez said a debate between the two rivals “would never happen.”

(The debate challenge posed against presidential race frontrunner Bongbong Marcos would never happen for a number of reasons. And Mrs. Robredo knows what those reasons are.)

He once again reiterated that the Marcos camp would rather focus on positive campaigning and not engage in the attacks from the “yellow” camp, referring to the political color of the Liberal Party that Robredo chairs. She is running as an independent candidate to be seen as a unifying figure in the elections.

Rodriguez, however, failed to mention the massive disinformation networks that the Marcoses have cultivated over the years. Several studies have shown that Robredo has been a primary target of this disinformation infrastructure, which in turn benefits Marcos. 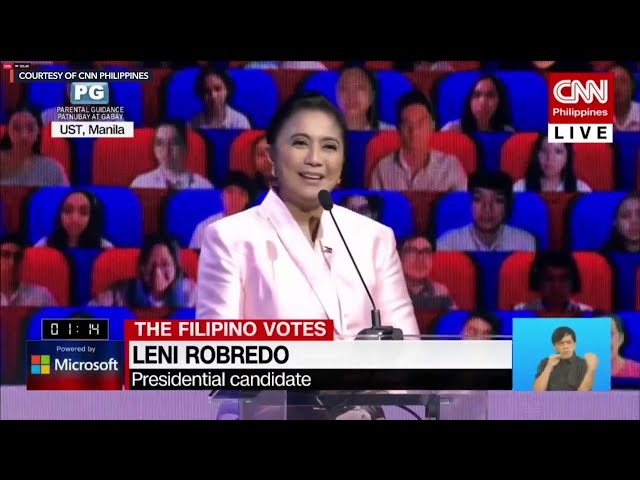 But Robredo said on Friday that she has opted out of the panel interviews, since her supporters have already worked hard in organizing rallies scheduled for the last week of the campaign.

She has been regularly joining debates, interviews, and forums since declaring her presidential candidacy.

(I’ve decided not to accept the invitation of Comelec and KBP, so that I can join my volunteers who have spent and pitched in their own money, and used up their time and energy just to be with us.)

(I am joining the challenge of VP Leni to Mr. Bongbong Marcos and to my rival Davao City Mayor Inday Sara Duterte to accept the invitation, because they are the only ones among the candidates who have not showed up in the previous debates.)

(Remember that we are courting voters, so it is only right that we face them so they would know our plans for the country. Usually the ones who do not show up have something to hide. Is the camp of Marcos-Duterte hiding something? Prove to us that you’re not.)

Robredo has seen a groundswell of support for her presidential bid, with tens of thousands of attendees becoming a staple in her grand rallies across provinces – even in known enemy bailiwicks.

As Robredo’s campaign surged in the last few weeks before the May 9 elections, attacks against her and her family have ramped up. Fake sex videos were fabricated against her daughters Aika and Tricia, who have since sought the National Bureau of Investigation’s assistance to hold the perpetrators accountable.

Her youngest daughter Jillian was heckled in a public market in Baguio City, part of the so-called “Solid North” territory where votes are commanded by the Marcoses.

Robredo’s camp and political pundits believe the intensified black propaganda against the lone female presidential candidate and her family signifies Robredo’s growing momentum in the crucial homestretch of the campaign. – With reports from Lian Buan/Rappler.com