Facebook Twitter Copy URL
Copied
(1st UPDATE) Out of the ring for good, boxing superstar Manny Pacquiao is now officially a contender for the presidency in 2022

Boxing champion-turned-politician Manny Pacquiao filed his certificate of candidacy (COC) for president around 9 am on Friday, October 1, becoming the first to officially vie for the highest elective post in the land.

Given pandemic restrictions, the senator was only allowed to be with two people as he filed his COC, but a number of supporters were outside the venue to cheer for him.

In his speech, Pacquaio said that if elected president, he will focus on strengthening the economy, improving internet speed, and lowering electricity rates.

(First of all, the pandemic that has yet to be solved should be addressed so that our economy bounces back. This would mean that more people will be able to get their jobs back.) 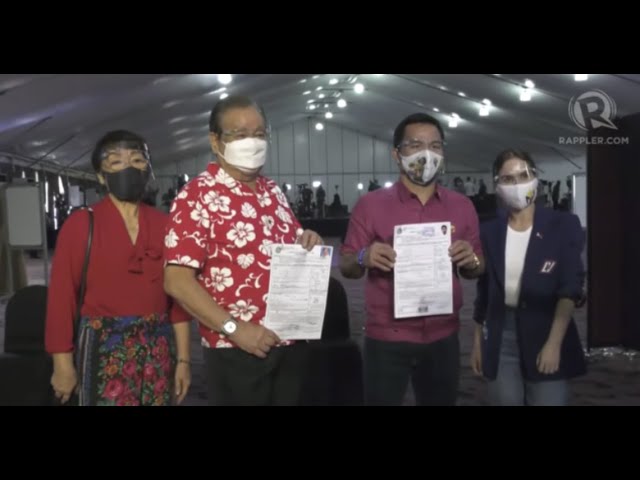 Pacquiao ended his illustrious decades-long boxing career that earned him worldwide fame to gamble on the high-stakes presidential election.

A former ally of President Rodrigo Duterte, Pacquiao was nominated by the faction of the Partido Demokratiko Pilipino–Lakas ng Bayan (PDP-Laban) that he leads. The other camp, led by Energy Secretary Alfonso Cusi, had nominated Senator Bong Go and Duterte as their presidential and vice presidential bets, respectively.

Even as the Commission on Elections (Comelec) still has to decide on which camp to recognize as the legitimate representative of PDP-Laban, Pacquiao filed his candidacy with Progressive Movement for the Devolution of Initiatives or PROMDI, the national party founded by the late former Cebu governor Lito Osmeña.

Asked if he has given up the fight for legitimacy at Comelec, Pacquiao said “no,” despite him running under PROMDI.

(The PDP has problems, so we’ve decided to go with PROMDI in the meantime.)

Pacquiao’s faction at PDP-Laban forged an alliance with PROMDI, which subsequently nominated the senator as its standard-bearer for the 2022 polls.

When Pacquiao announced his bid on September 19, he promised to fight corruption and uplift the lives of Filipino people.

From poverty to presidency? The many transformations of Manny Pacquiao Days before filing, the Pacquiao camp was still in talks with Vice President Leni Robredo and 1Sambayan on fielding a united opposition slate that aimed to beat administration candidates.

But his move on Friday proved that those discussions fell through.

COC filing is until October 8. – Rappler.com