During the media interview on Thursday, March 31, Pacquiao speculated that the power to do whatever they want could be the reason behind the Marcoses’ effort to retake Malacañang.

(They really want to return to Malacañang. Why? First of all, they will be absolved from their problem with taxes. Second, here’s the goal that I really see: If they are back in power, all of the disputed property, gold deposit, all of that could be cleared back to them. They could transfer it back to their accounts.) 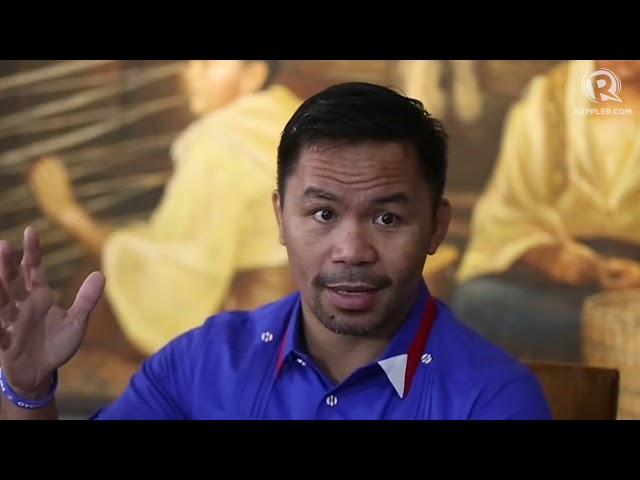 In previous statements, Pacquiao has appealed to the public that the Filipino people should not vote for a thief.

In Marcos Jr.’s own bailiwick, at the so-called Solid North, Pacquiao said that “only those who are stupid would vote for a thief”. He also said that Filipinos are smart enough to decide.

Now, Pacquiao did not hesitate to say that Marcos Jr. could might as well declare Martial Law, just like his father.

(It would not be far-fetched to think that another Martial Law could happen if Bongbong becomes president. I received this discernment from the Lord but our countrymen will definitely regret this.)

If this happens, Pacquiao said that more Filipinos could join the communist movement in a bid to depose another dictator. He adds, “Ako, wala naman akong problema, fighter naman ako. Basta para sa bayan, laban.” (I don’t have a problem, I am a fighter. This is for our country, we will fight.)

Retired Supreme Court justice Antonio Carpio said in an interview with ANC’s Headstart that the Philippine government could no longer collect the P203-billion estate tax with the Marcoses if Marcos Jr. becomes president.

“The president has supervision and control over the entire executive department. Control means he can reverse their decision. He can preempt and make the decision himself,” Carpio said.

‘If we elect a thief, there’s no one to blame but us’ – Pacquiao Aside from the level of control as chief executive, Pacquiao also said that illegal drugs could flourish under a Marcos Jr. presidency.

(Those who want to take advantage of our coverage, those who are greedy, would say, ‘The president’s term is coming to an end. We need to start bringing in drugs since the survey frontrunner is not declaring war on drugs. If you really want to bring down our country, then so be it. Vote for him.)

For the boxing champion, all of these spell dark days ahead.

(For many years, decades, we placed the Philippines on the map, then we will only destroy our country?) – Rappler.com