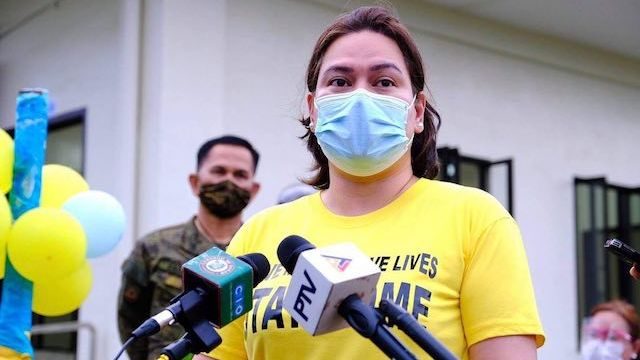 TO RUN OR NOT? Sara Duterte in Davao City.

With Sara Duterte saying she will no longer seek a national position in 2022, national political parties have been left in limbo just days before the filing of certificates of candidacy.

PMP president Jinggoy Estrada gave the same confirmation through text message. When asked whether their coalition proposal has been signed with HnP, he replied, “Nope.”

Surigao 2nd District Representative Ace Barbers, who is a local official of Nacionalista, said their coalition agreement has also not been signed yet.

Barbers said it appears that HnP is more inclined to make alliances with regional parties as it maintained its alliance with his local party, Abante Surigao.

An official at NUP also confirmed their party’s hanging agreement with HnP.

NUP has even looked at other parties as it is set to sign an alliance agreement on Friday, October 1, with the Nationalist People’s Coalition (NPC) and Partido Reporma, which both carry Senators Panfilo Lacson and Vicente Sotto III as their tandem for 2022.

“Wala pa kasi yung sa HnP up to now (The one with HnP is still not coming around up until now),” the NUP official said.

Rappler sought the comment of HnP secretary general Anthony del Rosario through text message, but he declined to respond.

To recall, the national parties placed their bets on Sara even before she has decided to run for the presidency.

After months of pondering and speaking with fellow politicians, Sara Duterte said on September 9 that she will not run for president given that her father, President Rodrigo Duterte, decided to run for vice president.

Sara said she intends to run again for the mayoralty of Davao City . – Rappler.com