Presidential candidate Vice President Leni Robredo visits the Marinduque Provincial Capitol in Boac on Monday, April 18. The Marinduque Capitol Choir serenaded Robredo with “Putong”, a song of thanksgiving and prayer, while releasing butterflies, a symbol of Marinduque, the country’s Butterfly Capital. Robredo has said before that her late husband, Interior Secretary Jesse Robredo, would make his presence felt through butterflies. The people at the capitol also gave Robredo an advanced birthday greeting with a song and a cake. Robredo’s birthday is on April 23.

The elder Velasco, whose son Lord Allan Velasco sits as Speaker of the House of Representatives, pulled out all the stops when Robredo paid him a courtesy call at the capitol ahead of her rally at the Boac Sports Arena on Monday, April 18.

It was the governor who placed a crown on Robredo’s head as the Marinduqeños gathered at the capitol lobby performed the traditional “putong” ceremony, a dance-ritual locals do to welcome guests to their province and wish them a long, blessed life.

In Filipino, “putong” means to crown.

A tarpaulin bearing Robredo’s photo was also hung at the lobby stairway, welcoming her to the province known as the “Puso ng Pilipinas” or the Heart of the Philippines.

Governor Velasco also led provincial capitol staff and other Robredo supporters in wishing her a happy birthday in advance by giving her a cake. Robredo turns 57 on Saturday, April 23.

Speaker Velasco was at the capitol as well, joining his father in a private meeting with Robredo before she went to the rally.

But despite the rock star welcome they gave Robredo at their home turf, the Velascos stopped short of endorsing her for president on Monday. None of Marinduque’s politicians joined the rally of Robredo and her running mate Senator Kiko Pangilinan at Boac either.

At least three campaign sources told Rappler that the Velascos are among the local politicians that Robredo is continuing to court with just three weeks left before the May 9 elections.

Robredo was already set to visit Marinduque on April 6, but her trip was postponed by two weeks as talks continued between her camp and the Velascos.

No formal endorsement happened in Marinduque, however. Still, Robredo thanked the father and son at the start of her speech.

Robredo returned on the campaign trail on Monday after taking a break during Holy Week. She first held sorties in Infanta town and Pollilo Island in Quezon, before going to Marinduque on Monday afternoon.

She remains unfazed even after three of Robredo’s male rivals for the presidency practically ganged up on her in a joint press conference on Easter Sunday, April 17, when they rejected calls for them to withdraw from the race in favor of the lone female presidential candidate.

Why Velascos’ endorsement would be crucial for Robredo

That the Velascos did not endorse Robredo in Marinduque is not surprising.

The ruling political clan in this island province is close to Duterte and his daughter Davao City Mayor Sara Duterte. Sara Duterte is the running mate of the late dictator’s son Ferdinand Marcos Jr., and the tandem was adopted by the ruling PDP-Laban as candidates in the presidential and vice presidential races.

Speaker Velasco is a close friend of Sara Duterte – in 2019, he and his wife Wen even named their newborn baby Sara Kristina, after the Davao City mayor. A year later, the Marinduque congressman managed to unseat his rival, then-Speaker Alan Peter Cayetano, with the help of no less than Sara Duterte herself.

When Governor Velasco was still associate justice, he had concurred in all Supreme Court rulings that favored Duterte’s policies. He was appointed to the High Court in 2006 by then-president Gloria Macapagal-Arroyo, the veteran tactician who brokered the Marcos-Duterte alliance in the 2022 polls. 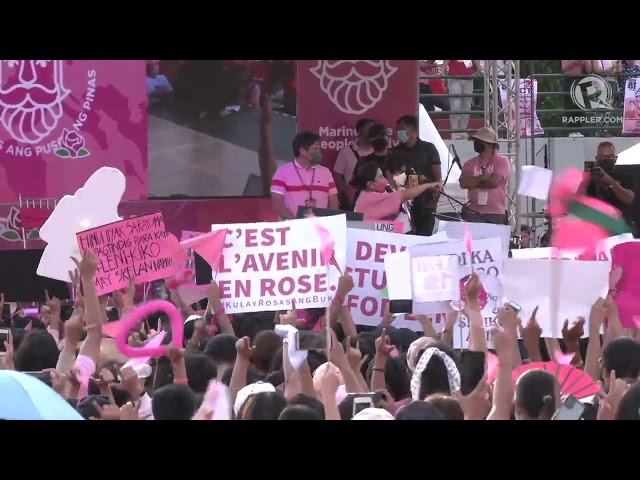 If Robredo manages to win over the Velascos in the next three weeks, her campaign would benefit from their political influence at the tail-end of the Duterte presidency.

The Velasco patriarch is president of the League of Provinces of the Philippines, comprising the 81 governors in the country. Lord Velasco would also be a crucial ally since he is House Speaker, a position that gives him a bargaining advantage over leaders and strategists in political parties and party-list groups.

But even without the Velascos’ endorsement, Marinduqueños supporters of Robredo and Pangilinan went all out for them. Their hands were raised instead by beneficiaries of Robredo’s Angat Buhay anti-poverty program in the province.

Robredo enjoys strong support among residents here, who gave her a landslide victory in the Marinduque over Marcos in the 2016 vice presidential race. Robredo got 40,598 votes, while Marcos only had 22,022 votes.

There are currently over 161,500 registered voters in Marinduque for the 2022 elections.

At the start of the rally, young Marinduqueños wearing Moriones soldier costumes, flanked Robredo and Pangilinan as they greeted their supporters on stage.

Marinduque is known for its Moriones Festival. It celebrates the life of Saint Longinus, a half-blind Roman soldier who speared the crucified body of Jesus Christ and is said to have regained his vision when Jesus’ blood hit his eye.

Among the Moriones soldiers who welcomed the tandem was 22-year-old Bonn Buenavanetura, a son of a farmer and government employee in Boac town.

(I believe in what she has said before that there’s a need make the agricultural sector in the Philippines thrive. So it’s important for me that their platforms align with mine.) 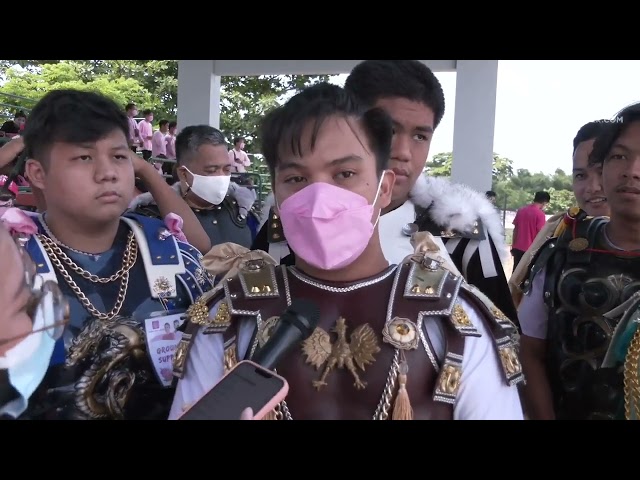 Senior citizens of Marinduque also performed another “putong” ceremony to honor the Leni-Kiko tandem, offering coins and flowers onstage before “crowning” them in front of thousands of supporters.

Flor Siazon, 71, said it’s an honor for her to welcome Robredo and Pangilinan to Marinduque. She said other senior citizens like her have been going house-to-house in Boac to convince more of their province mates to chose the opposition tandem in May.

(We’re just standing by them. We’re for the Leni-Kiko team. For me, she’s really the most qualified of them all. She’s an economist and a lawyer. I think she can uplift our country.)

But are Marinduqueños concerned Robredo would not be able to replicate her 2016 victory in the province, given that the Velascos are not supporting her?

Buenaventura, who will be voting for the first time in May, does not think so.

(It does not really matter who are the powerful ones supporting her. What’s more important is the person the people are supporting…. I believe that the Heart of the Philippines would carry the  right, genuine, and honest candidates.)

Robredo has always said the true strength of her campaign lies in ordinary folk, who have been spending their own money and dedicating time to help campaign for her in 2022. – Rappler.com

LIST: Who is running in Marinduque in the 2022 Philippine elections?