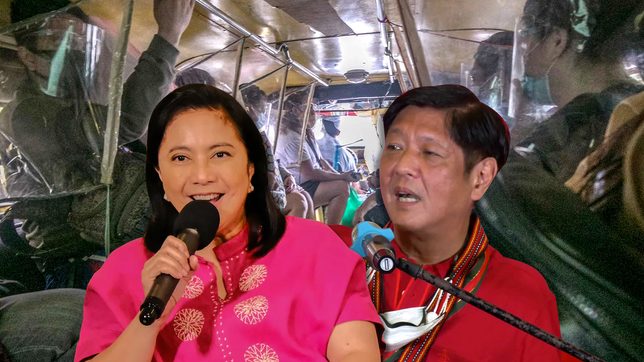 Instead of scaring Filipinos into getting vaccines, Robredo said Thursday, January 13, that people should be properly informed or incentivized to persuade them to be inoculated against COVID-19.

“We have been having Vaccine Express in many parts of the country. And in our experience, hindi dapat takutan eh (you shouldn’t scare them). From experience, you have to educate people.… You have to make sure vaccination is accessible to them,” said Robredo in an interview with CNN Philippines.

She added: “Dapat sana ‘yung vaccination, hindi siya lalabas na paparusahan ka ‘pag ‘di ka bakunado.” (Vaccination should not appear as if you are punishing people if they are not vaccinated.)

Marcos, meanwhile, believes that DOTr’s public transport ban against the unvaccinated is necessary.

“The data as to the exponential increase in the number of COVID-19 infections are indubitable, thus the government’s response to observe extreme caution is but a necessary consequence when the health and safety of the general public are at stake,” said Marcos spokesperson Victor Rodriguez.

According to Marcos’ spokesperson, the policy is “founded on sufficient valuable data that are available in DOTr’s possession.” It is unclear what that data exactly is, but the DOTr has been citing the World Health Organization and the Philippine Department of Health when saying that the Omicron variant is highly transmissible.

While it supports the policy, the Marcos camp also urged the government to expand and bring the vaccination program to Filipinos’ doorsteps.

The widely-criticized public transport ban is set to fully take effect on Monday, January 17. The Commission on Human Rights has rejected the policy as it “restricts the exercise and enjoyment of fundamental rights.“

The DOTr has since apologized for the inconvenience it may cause to the public, but unapologetically defended the ban as necessary for public safety. There are exemptions and the unvaccinated can use their own vehicles anyway, the DOTr said.

Is it really the unvaccinated’s fault?

Presidential aspirant Senator Manny Pacquiao noted that the government “should not force” Filipinos to be vaccinated, rather persuade them by explaining the benefits of being inoculated against COVID-19.

(Let us not treat them like criminals. Let us not hinder them from exercising their right to work or to buy essentials.)

De Guzman also noted that it is difficult to enforce the ban, especially when the burden of ensuring that only vaccinated passengers are inside public transportation lies with the transport workers. He also cautioned that some people might resort to using fake vaccination cards just to avail themselves of a ride.

Senator Panfilo Lacson posed a question: “Are there enough vaccine doses available even for the willing? If not, it’s unfair.”

“Indiscriminately punishing even the willing but have no choice due to government shortcomings in providing for their protection should first be taken into consideration, before taking a drastic action of possibly denying those people their means of livelihood to feed their families,” Lacson said.

“It is a different matter altogether if vaccines are available to all. By all means, we have the right to be insulated from a higher risk of infection. At least both sides have an option,” Lacson added.

As of Tuesday, January 11, vaccine czar Secretary Carlito Galvez Jr. said that the government has an existing supply of 100 million doses, which is enough to cover the primary dose and booster shots of 25 million individuals. The Philippine government is eyeing to inoculate 90 million people by the end of June.

Manila Mayor Isko Moreno has yet to issue a statement on the “No vaccination, no ride” policy. Moreno, however, has signed the Metro Manila Council resolution that restricted the movement of unvaccinated individuals, including the use of public transportation. – Rappler.com