RALLY. Huge welcome from the people of Las Piñas City and Perpetual Community to Presidential aspirant Ferdinand 'Bong Bong' Marcos Jr. during his caravan together with senatoriable Mark Villar. 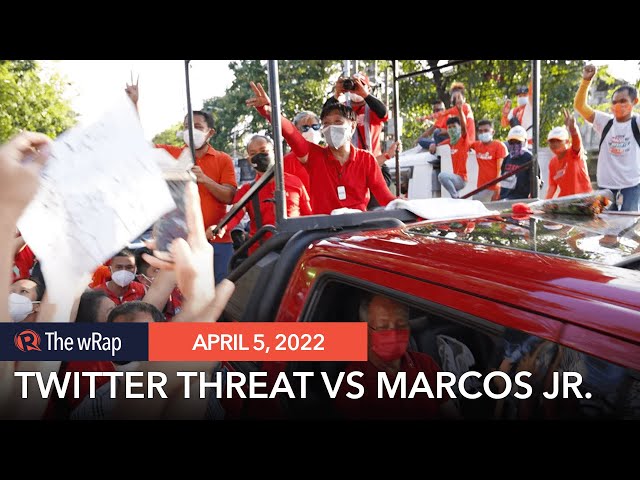 The Grab driver had supposedly threatened to shoot Marcos Jr after sharing on Twitter that he was “blocked” by Marcos Jr in 2016.

Prosecutors approved charging the driver for supposedly committing grave threats in relation to the Cybercrime Law. The driver had been arrested and jailed – without a warrant – on April 1, Friday.

Quezon City police said he had turned himself in to police, who in turn brought him in for inquest.

Inquest is a process done for warrantless arrests to determine if it was lawful or not.

In their April 1 release, Marcos Jr’s campaign had lauded Quezon City police for the “swift arrest” of the said Grab driver.

The campaign quoted the Grab driver’s tweet but omitted the part that indicated he was supposedly blocked by Marcos Jr back 2016. The alleged tweet was made on March 15, 2022.

Warrantless arrests are only valid if a person is caught committing the crime, there’s “probable cause” that the crime was committed, or the person is a fugitive on the run.

A “continuing crime” posits that a crime does not end even when they are no longer committing the crime at the moment.

The Grab driver would be the second person placed under arrest for allegedly plotting to harm Marcos. In February, a person who supposedly posted on TikTok about a plan to harm the dictator’s son was arrested, also without a warrant. – Rappler.com