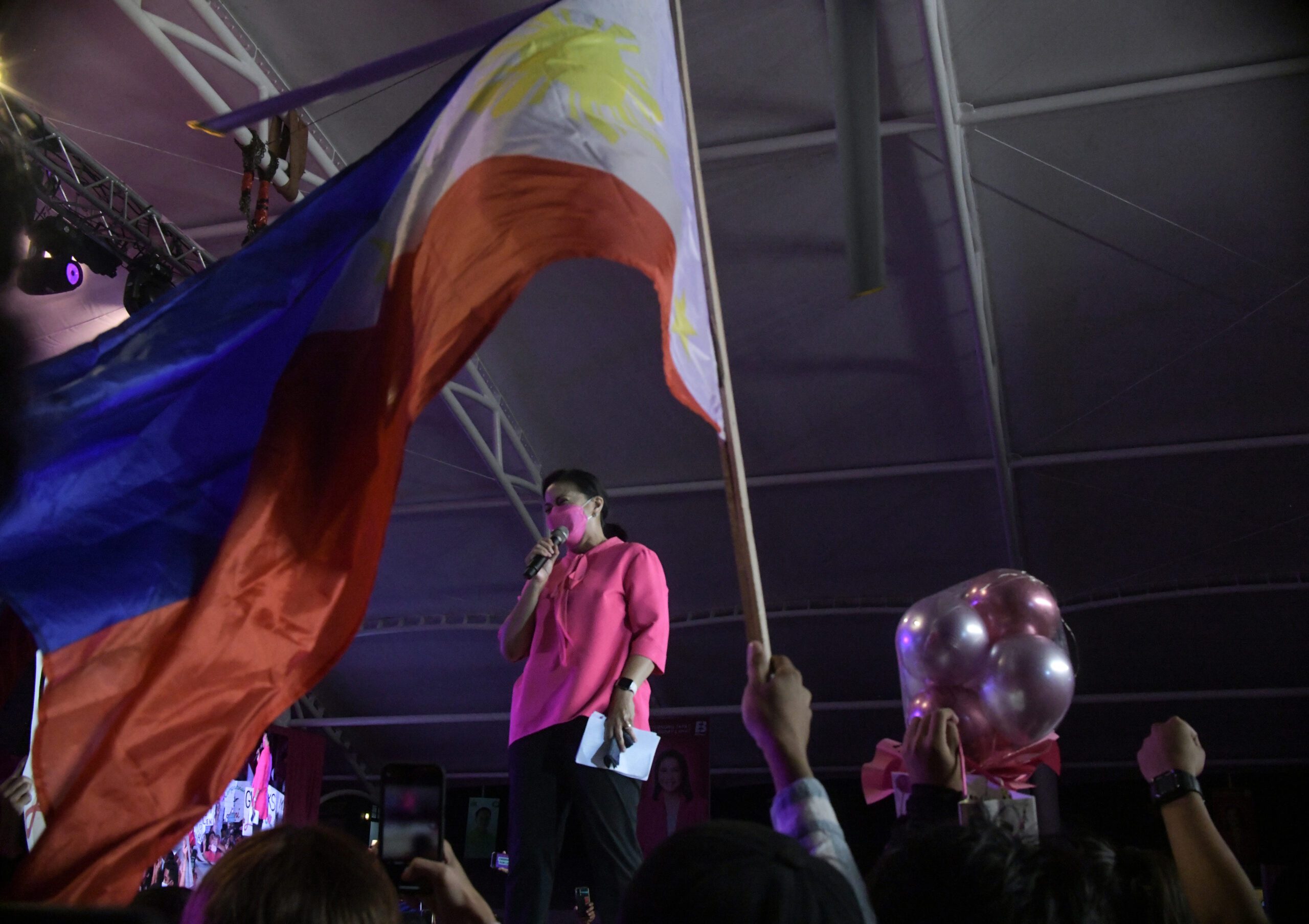 CONCLUDING MINDANAO. Vice President Leni Robredo ends her campaign sorties in Mindanao with a grand rally attended by tens of thousands on the Naliyagan grounds at the provincial capitol compound in Prosperidad, Agusan del Sur, on May 5, 2022.

AGUSAN DEL SUR, Philippines – Vice President Leni Robredo concluded her campaign in Mindanao with a grand rally attended by tens of thousands at the provincial capitol compound in Prosperidad, Agusan del Sur on Thursday night, May 5.

A large number of her supporters arrived at the rally venue on Naliyagan grounds via buses and trucks from neighboring towns, concluding their blistering house-to-house campaign to help Robredo thwart the return of the Marcoses to power and the election of the late dictator’s son and namesake Ferdinand “Bongbong” Marcos Jr.

Many sweated for hours as they waited for the vice president, who came from Cagayan de Oro where she met 12 Bukidnon town mayors who switched to her side.

Her campaign has attracted politicians in the Caraga region, notably the political kingpin Representative Eddiebong Plaza of the 2nd District of Agusan del Sur and Governor Santiago “Santi” Cane Jr.

Plaza said he decided to support Robredo after a Holy Week reflection. He said he saw no other presidential candidate who could match Robredo’s qualifications.

“She is a lawyer, economist, and development worker. Qualities we need for the next presidency,” Plaza said.

Cane said the crowd of more than 20,000 occupied a one-kilometer and a half, four-lane road from the provincial capitol to Datu Lipus Makapandong Cultural Center, where a stage and huge tent were set up.

Robredo’s campaign media bureau, however, estimated the crowd size at as much as 70,000.

Giant TV screens were also set up around the capitol grounds and along the highway for people to watch.

The grand rally, which was also supposed to endorse vice presidential bet Davao Mayor Sara Duterte, was organized entirely for Robredo. Her posters were all over capitol grounds, and the stage was decorated in pink – the color associated with the Robredo campaign.

Plaza and Cane said they support the RoSa (Leni Robredo-Sara Duterte) campaign, but Thursday’s rally was clearly for Robredo alone.

Only a handful of Duterte supporters came, wearing green T-shirts – the color of the Davao mayor’s campaign – but they were quickly swallowed by the sea of pink.

Surigao del Norte Governor Francisco Matugas, his wife and former governor Sol, and other town mayors also endorsed Robredo and Duterte. They signed a pink surfboard as a show of support.

Robredo criss-crossed several Mindanao cities and provinces during the last day of her campaign in Mindanao.

Earlier in the day, she was in Oroquieta City speaking to her supporters during a multi-sectoral assembly at the Provincial Cultural and Farmers Training Center at the Misamis Occidental provincial capitol.

She also addressed her supporters during the Ozamiz City People’s Rally at the Misamis University Covered Court, where she was greeted by a sea of pink balloons and handmade placards.

From the western end of Northern Mindanao, she flew to the Caraga region for similar campaign activities.

A day earlier, Robredo was in Zamboanga del Norte province in the Zamboanga Peninsula, where representatives Isagani Amatong and Glona Labadlabad, and Mayor Rosendo “Dodoy” Labadlabad raised the vice president’s hands as a sign of support.