Vice President Leni Robredo is radiant on stage with her fellow presidential candidates in the second installment of the Pilipinas Debates 2022: The Turning Point on Sunday, April 3, held at the Sofitel Philippine Plaza. (VP Leni Media Bureau)

Facebook Twitter Copy URL
Copied
The lone female presidential candidate uses the second Comelec debate as an opportunity to flex not just her longtime advocacy for electoral and political reforms, but also to highlight her strength as a Filipina leader

MANILA, Philippines – Vice President Leni Robredo played to her strengths in the second presidential debate hosted by the Commission on Elections (Comelec), showing consistency in her deep understanding of the problems hounding the political system and what she can do to help address them.

On Sunday, April 3, the lone female presidential candidate used the Comelec debate as an opportunity to flex not just her longtime advocacy for electoral and political reforms, but also to highlight her strength as a Filipina leader.

The topics of the Comelec’s second presidential debate included government accountability, which played to Robredo’s advantage, as she has repeatedly said her anti-corruption program would spare no one, not even her own allies.

Robredo supported prohibiting the infamous practice of switching parties, which has weakened political parties, and said her first executive order would require all government offices to be transparent in all their transactions.

These are not just campaign promises for her either, as political and electoral reforms have been among Robredo’s advocacies even when she was just Camarines Sur 3rd District congresswoman. She has authored bills on a full disclosure policy, and banning turncoatism and political dynasties.

These final words – which packs a punch precisely because it was delivered in Filipino – also serve as Robredo’s counterattack to criticisms that she is supposedly a weak candidate because she is a woman. 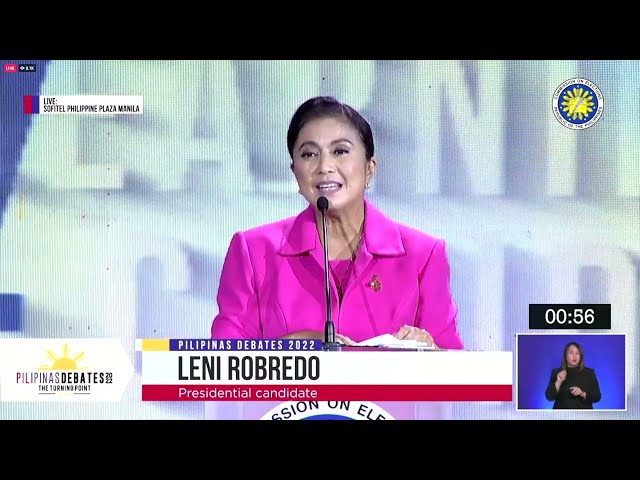 Robredo said during the debate that she would push Congress to pass a bill that would criminalize the practice of turncoatism, where politicians tend to jump from one political party to another, often at the expense of party principles.

It’s crucial for Robredo tor reiterate her anti-turncoatism stand at this point in the campaign, as the political bigwigs who have started pledging allegiance to her in the past weeks have been guilty of party switching in the past.

Political butterflies – called “balimbing” in Philippine politics – switch parties out of convenience, to boost their chance of winning an election. Robredo said she would support legislation that would ban this practice if she becomes president. 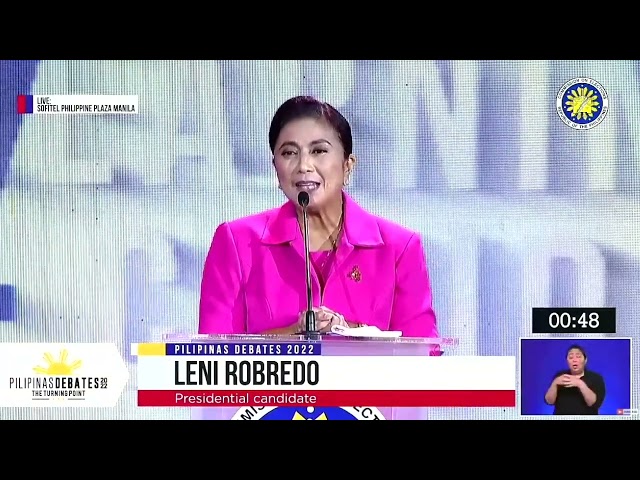 (We can see that candidates now no longer consider what their parties stand for, but just go for political convenience. So for me, we need to pass a bill to prohibit this because that will help strengthen our political parties.)

Robredo also said it was time to explore whether the country should maintain its multi-party system or return to a two-party setup, noting how the country’s leaders in recent history were minority presidents due to the number of parties fielding their own standard-bearers.

She also pushed for a tougher crackdown on election campaign violators, noting that rule breakers are usually emboldened because they are able to get away with it.

Robredo also showed her comprehensive understanding of other issues, like climate change, protection of overseas Filipino workers, and the West Philippine Sea.

During the climate change segment, Robredo noted that the government still lacked a clear roadmap to reach carbon neutrality by 2050.

The debate was also the first time the Vice President pushed for her proposed policy to forge bilateral agreements with foreign nations to ensure that overseas Filipino workers (OFWs), even if they retire in the Philippines, would continue to enjoy the social benefits they get in their host countries. She noted that this was among the reasons that deter OFWs from retiring in the Philippines. 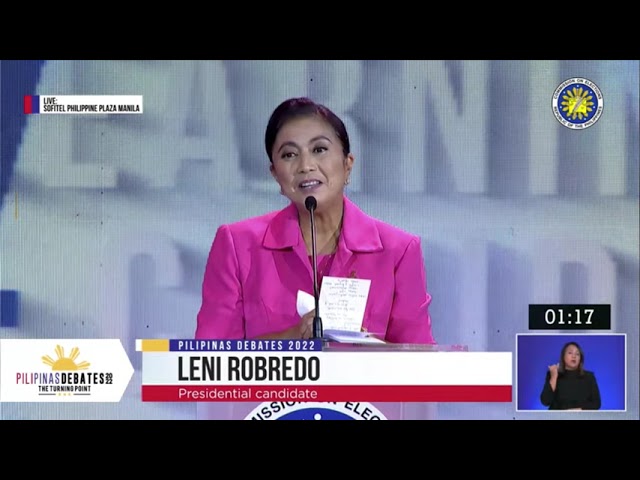 Robredo was not directly asked the question involving the West Philippine Sea, but in her rebuttal, she said that the Philippines must use its tribunal victory against Beijing as leverage.

(It is hard to form a Code of Conduct because there are countries where opposition to it is innate in them… But for me, the Philippines should be the one leading the charge here because we have an arbitral ruling in our favor and we must use that arbitral ruling as leverage.)

The opposition leader has long pushed President Rodrigo Duterte’s government to assert the Philippines’ arbitral victory to contest China’s unsanctioned incursions in the West Philippine Sea, a part of the South China Sea that belongs to the Philippines but Beijing is claiming as its own.

Robredo attended the second Comelec debate fresh from a grueling week on the campaign trail, where she visited nine provinces in the Visayas and Mindanao in five days.

Asked whether the candidates who showed up at the debate scored points against Ferdinand Marcos Jr., who has shunned the Comelec debates, Robredo said in an ambush interview after the event that it’s not for her to say.

She said that on her part, attendance in the Comelec-sponsored debate, while not required, “is very important” as it shows one’s respect not only for the Comelec but also for the public, who should be given a chance to size up the candidates. – Rappler.com