Supporters swell before the start of the Takder Kordi grand rally for VP Leni Robredo and Sen Kiko Pangilinan, in Baguio City on May 2, 2022. Jire Carreon/Rappler 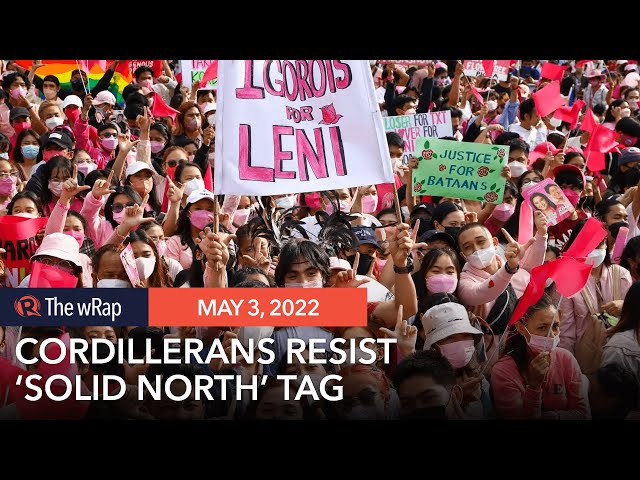 BAGUIO CITY, Philippines – The chilly night air in Baguio City at the heart of the Cordillera region only got colder as heavy rain poured down on Monday, May 2.

But the tens of thousands of Cordillerans gathered at the sprawling grounds of the Melvin Jones Grandstand stood firm, holding up their umbrellas as they waited for the arrival of Vice President Leni Robredo, the lone female presidential contender in the high-stakes 2022 polls.

Many of them were drenched, their shoes left muddy by the downpour. Yet local organizers said 30,000 people stayed to listen to Robredo, who was overwhelmed by her “kakampinks” who dared to defy the notion that the people in the so-called “Solid North” only want the late dictator’s son Ferdinand “Bongbong” Marcos Jr. as their president.

By the time Robredo finally walked on stage to face her supporters, the rain had stopped, as if by divine intervention – something that happened frequently in her campaign rallies. The crowd went into a frenzy as she began her speech, waving their pink flags and handmade placards into the air.

The Cordillerans clad in pink had one rallying cry that night: “Awan ti Solid North (There is no Solid North!)”

Robredo knew the risks residents here are taking by openly campaigning for her. They have to endure criticisms even from their own relatives, who have been supporting the Marcoses for generations. Some “kakampinks” in Baguio City have even been red-tagged.

So Robredo made sure that on the first day of her final leg on the campaign trail, she was up North to thank her supporters for all their sacrifices.

(I am thankful, because just like what our National Artists said earlier, even if the fight is difficult, you’re still fighting. Even if there are many obstacles, you are not retreating, because you know that when we are fighting for the right things, we would not lose.)

The three national artists had a resounding message for the Cordillerans: Vote Robredo and running mate Senator Kiko Pangilinan to thwart a Marcos comeback in Malacañang. 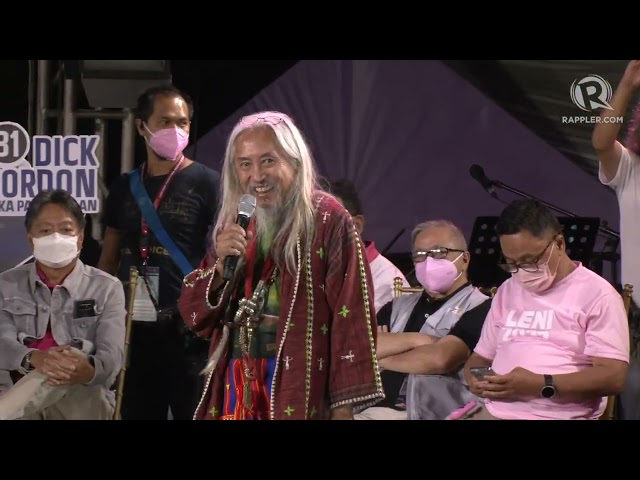 (Here in the Cordilleras, the darkness of colonialism could not enter because of the strength of the Cordillaras’ culture. May we resist the return of the dictatorship, too.)

Almario recalled that several artists and cultural workers came together a few months ago to draft a manifesto for the promotion of Philippine culture. They sent it to all presidential candidates, yet it was only Robredo who responded.

(It’s time for the Philippines to change. It’s time for corruption to be gone. And this would only happen if you would join us on May 9 in voting for our “Kakampink.”)

The famed painter Cabrera often avoids delivering public speeches, but he willingly went up onstage for Robredo in Baguio City.

(The only person qualified to be the president of the Philippines is Leni Robredo and Kiko Pangilinan for vice president, no one else.)

Robredo was also endorsed by reelectionist councilors Mylen Yaranon, Arthur Allad-iw, Popo Cosalan, and Councilor candidate Jose Molintas – all of whom wore pink and green vests to represent the campaign colors of Robredo and her running mate Senator Kiko Pangilinan.

Robredo was warmly welcomed by the Cordillerans in Baguio City, where tribesmen butchered a wild boar as part of their blessing ritual for her. Robredo and Pangilinan also joined the cultural dance that the Igorots performed for them onstage.

Members of the respected Council of Elders across different provinces in CAR officials went up onstage one by one to endorse the Leni-Kiko tandem in their local tongue. Baguio’s four universities – University of the Philippines-Baguio, St. Louis University, University of Baguio, and the University of the Cordilleras – also shed their neutrality in favor of Robredo and her bid to stop Marcos from becoming president.

Robredo’s youngest daughter Jillian was heckled at the Baguio City Public Market last week. Mayor Benjamin Magalong has apologized, but Robredo said he did not have to do that. Robredo said it was an isolated incident, believing it does not represent the entirety of Baguio residents known for their hospitality.

Robredo’s vow: ‘You will again be proud to be Filipinos’

Robredo’s big rally in Baguio City completed her one-day tour of the Cordillera on Monday. It was a thank you tour of sorts for Robredo, who has long wanted to personally thank her “kakampinks” in this region after seeing all the efforts they have been doing for the tandem these past three months.

Robredo first went to Tabuk City in Kalinga, where she had a meet and greet with her supporters. Like in Baguio, the Vice President thanked them for campaigning for her despite the local political terrain.

If she wins, Robredo vowed to do what she can to make sure that Filipinos would become proud of their country again, an indirect jab at the abusive policies and pandemic mismanagement under President Rodrigo Duterte.

“Kahit maging pangulo ako, I cannot promise you that all our problems will disappear when I’m president. Pero ang mapa-promise ko sa inyo, na after six years, you will again be proud to be Filipinos,” said Robredo.

Robredo also went to Abra to meet with her supporters from the Abra Electric Cooperative and the Abra for Leni volunteer group, before taking a chopper to Baguio City for the people’s rally in the evening.

Though it has already become a staple for tens of thousands – even hundreds of thousands – of supporters to attend Robredo’s campaign rallies, she still has a lot of work to do in the crucial final week of the campaign if she wants to catch up to the frontrunner Marcos. The dictator’s son still dominated the latest Pulse Asia Research, Incorporated survey done in late-April, where he got 56% compared to Robredo’s 23%. Morale in the Robredo camp remains upbeat, however, as they believe the true strength of their campaign lies in their massive volunteer network doing house-to-house efforts across the country. – Rappler.com