‘Sorry, Trillanes’: 1Sambayan ‘happy’ with Robredo’s talks with other 2022 bets

The 1Sambayan coalition welcomed Vice President Leni Robredo’s efforts to sit down with other potential presidential bets, saying it is in sync with their efforts to forge a united opposition in the 2022 elections.

Robredo – whom preelection surveys indicate to be the most viable opposition standard-bearer despite her low numbers – and Trillanes are among the 1Sambayan nominees for its presidential bet in 2022.

For Morales, Robredo talking with other politicians does not necessarily mean she is already “waltzing” with the enemy.

Rather, 1Sambayan views it as part of Robredo’s coalition-building efforts for the opposition.

“I’m sorry, senator Trillanes. That Leni has been talking to senators Lacson and Sotto does not mean that she’s already waltzing with them,” Morales said.

“In fact, the 1Sambayan is happy with this development because it would synchronize with the plan of the 1Sambayan to have just one set of candidates to go against the candidates of the President and his allies,” she added.

Robredo, Philippine opposition leader and chair of the once-ruling Liberal Party (LP), is still discerning whether to mount a presidential bid in 2022. She wants at least a fighting chance that she would win because otherwise, she might split the votes of the already-fragmented opposition.

Robredo has been spending the past weeks meeting with potential presidential contenders like Lacson, Senator Richard Gordon, and Manila Mayor Isko Moreno to find “commonalities” on issues they can agree on.

Trillanes, however, was appalled by these meetings, advising Robredo on social media that she should not be speaking with those deemed to be enablers of Duterte.

Trillanes’ Magdalo party has long been allied with Robredo and the LP, but he warned he would drop the alliance if the Vice President endorses Lacson instead. 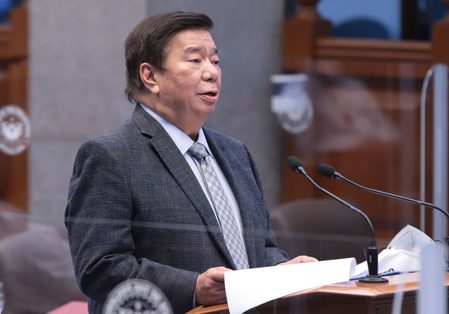 1Sambayan to meet with Robredo

To help clear the air, 1Sambayan convenor Father Albert Alejo said the coalition would soon schedule a meeting with Robredo herself to clarify her intentions behind these meetings.

The convenors have previously met with the Vice President and Trillanes in the past weeks, but have yet to discuss the latest conflict between their two nominees.

(It would be better if VP Leni faces the 1Sambayan convenors so we can also hear for ourselves her own interpretation over the things she’s doing now. So within this week, eary next week, VP Leni would have the time to face us.)

1Sambayan is aiming to endorse a single slate of national candidates – president, vice president, and senators – as the group believes only a united opposition can defeat the Duterte forces in 2022.

But the coalition is struggling. Out of its six nominees, only Robredo and Trillanes have categorically expressed willingness to join 1Sambayan’s vetting process.

The rest either declined 1Sambayan’s nomination or were non-committal.

The convenors said on Wednesday that the legacy of clean governance left behind by the late former president Benigno “Noynoy” Aquino III will be a factor in choosing their standard-bearer in the 2022 polls.  – Rappler.com