Facebook Twitter Copy URL
Copied
Event organizers estimate that around 80,000 people attended the rally for the tandem in Tagbilaran City

BOHOL, Philippines – While Vice President Leni Robredo was not able to secure the endorsement of any local chief executive during her visit to Bohol on Friday, April 1, tens of thousands still turned up at the People’s Grand Rally at the old city airport in Tagbilaran City for the presidential candidate and her running mate Senator Francis “Kiko” Pangilinan.

According to estimates of event organizers, over 80,000 people attended the Friday night rally. 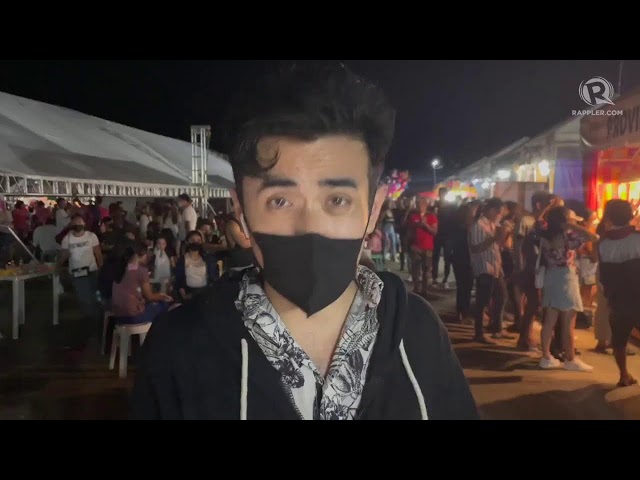 It was Robredo’s last stop of her campaign tour in Bohol province after visiting the towns of Jagna and Talibon earlier on Friday.

Robredo won in Bohol during the 2016 vice presidential race with over 276,000 votes, while the current survey frontrunner, Ferdinand Marcos Jr., was at a distant third place with over 80,000 votes.

No local government officials appeared at the grand rally either but the mood remained festive, sustained by the enthusiasm and energy of the audience.

Robredo remained hopeful that her volunteer-driven campaign would be the key to victory in Bohol this time around.

(I’m happy that you’re fighting for me. But in order for us to convince others, let’s not fight. That’s why we say: radical love.)

Robredo was with Pangilinan and several members of her senatorial slate including Chel Diokno and Senator Dick Gordon, while other bets spoke to Boholanos via representatives. 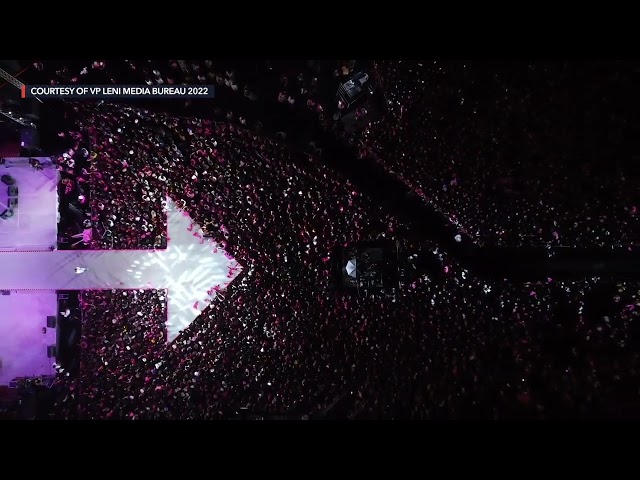 Pangilinan thanked the Boholanons for choosing him the last three times he ran for the Senate. He served as senator for two consecutive terms from 2001 to 2013, and then again since 2016.

He reiterated that even without any endorsements in Bohol, it will be the people who would decide who the next president and vice president will be.

During the Jagna rally, the tandem encouraged supporters to join house-to-house campaign efforts as the tandem strives to boost their numbers in the pre-election surveys.

Pulse Asia’s most recent survey taken from February 18 to 23 showed Robredo at far second place with a voter’s preference of 15% to Marcos’ 60%.

During her rally speech, Robredo highlighted her office’s consistent projects in the province through her Angat Buhay program and quick response during disasters.

Robredo also mentioned turning over personal protective equipment during the pandemic, providing medical supplies to at least 77 hospitals in Bohol, and setting up learning hubs for students who do not have gadgets or internet access.

She also reminded Boholanos that after Typhoon Odette struck the province on December 16, 2021, her team was already with them the following day to help in relief efforts.

“Kayo ‘yung pinakauna kong lalawigan na binisita para makita ang pinsala at alamin kung papaano kami makakatulong (You were the first province I visited to see the damage and know how we could help),” Robredo said.

Aside from citing her office’s existing projects for Bohol, Robredo promised to fix the province’s perennial struggle with power supply, and also boost the island’s tourism industry which was affected by the pandemic.

When Typhoon Odette devastated Bohol, it also took down power lines in a province that already deals with regular rotating power outages.

(I remember you had no electricity for a long time. My promise to Boholanos: I’ll personally be on top of ensuring your power supply, aside from making sure your supply is enough, and it should always be reliable.)

Robredo also said that she would prioritize boosting the tourism industry, which has been severely impacted by the pandemic and Odette, adding that communities who depend on this industry have suffered the most.

(Now that tourism has reopened, I promise Boholanos: We will boost and develop the whole industry and every part of it – the employees, businesses, even communities. There are so many skilled and competent people in the industry. Let’s give them the support they need so that they will be more uplifted. We will ensure that tourism is not only safe, but also sustainable.)

On Saturday, April 2, volunteers of the Robredo-Pangilinan tandem will hold a grand house-to-house campaign, a step up in their efforts to convert the unconvinced. The Robredo People’s Council said they expected some 10,000 volunteers to join the effort.

Several celebrities are joining the house-to-house campaign in different parts of the country including Agot Isidro, Angel Locsin, and Donny Pangilinan. – Rappler.com