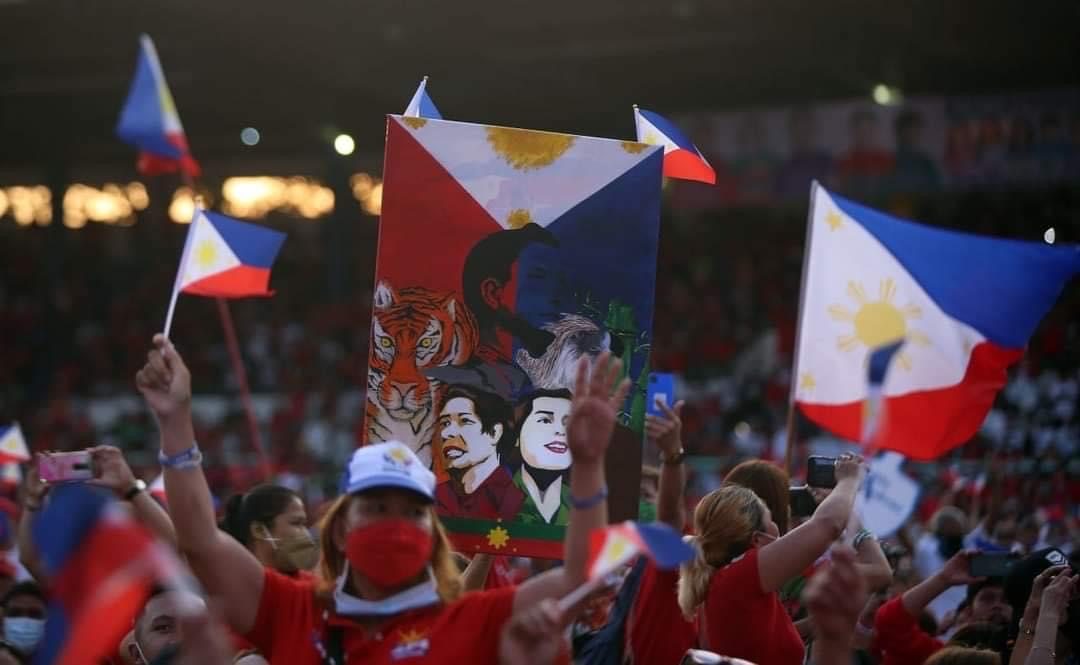 Facebook Twitter Copy URL
Copied
(1st UPDATE) A clear message without a comprehensive platform sounds absurd to many, but it's working for Marcos Jr. 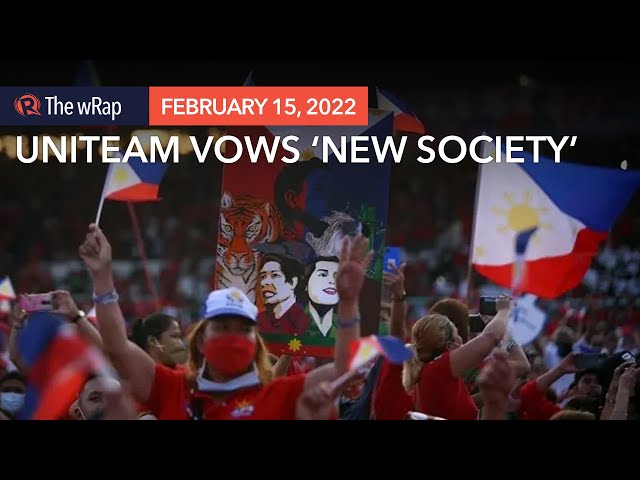 MANILA, Philippines – On Valentine’s Day, February 14, survey front runner Ferdinand “Bongbong” Marcos Jr. walked into the Amoranto Sports Complex in vote-rich Quezon City packed with supporters in red shirts (and a smattering of green) as “Bagong Lipunan” – the Martial Law anthem of the late dictator and the presidential bet’s namesake – blasted from the speakers.

Amid thunderous applause and chants of “BBM,” Marcos Jr. settled on the stage to deliver a speech he had made before: repeated mentions of unity, appeals to the innate goodness and kindness of the Filipino, a “movement of unity” or a “kilusan ng pagkakaisa,” and an ode to the supposed good old days commonly known as the dark chapter in Philippine history.

Marcos Jr., again, gave no specifics about his platform of “unity.” While the Uniteam presidential candidate mentioned the need to help the tourism sector, ramp up infrastructure, and improve internet connection, he did not lay out any concrete plans. Despite being the front runner in almost all voters’ preference surveys, Marcos Jr. has yet to present a clear and detailed campaign platform. 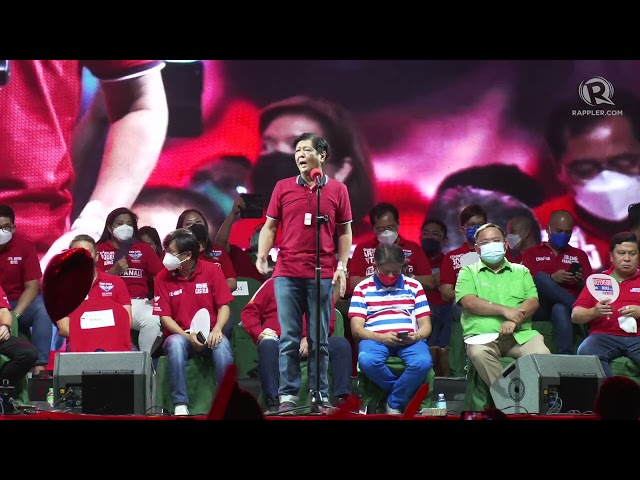 Even before Marcos Jr. arrived in the venue, candidates for posts in Quezon City under Anakalusugan Representative Mike Defensor’s Malayang Quezon City slate, spoke of pet projects for the city and always, of unity and cooperation.

Senatorial candidates who spoke ahead of Marcos Jr. laid out their proposed legislative priorities and made jabs here and there, but always returned to the main promise: of unity under a Marcos Jr. presidency.

Quezon City 1st District Representative Onyx Crisologo, who is seeking to keep his post, promised a “bagong lipunan” (new society) come 2022. He is the son of former congressman Vincent “Bingbong” Crisologo who was sentenced to a double life term for arson in 1970 but later granted pardon by his fellow Ilocano, dictator Ferdinand Marcos.

The older Crisologo, who lost his bid for Quezon City mayor in 2019, is running for Quezon City 6th District representative. The father and son are running under Lakas-CMD, which Sara Duterte chairs.

City Councilor Marvin Rillo, who is seeking a House seat, spoke not of a new “new society” but a return to the society of the past, as he rattled off a list of medical centers established during the late dictator’s nearly 21-year reign.

References to the Martial Law years and Marcos are nothing new for Marcos Jr., both in his 2022 campaign and his failed bid for the vice presidency in 2016.

Marcos, the dictator, unveiled his “bagong lipunan” or “new society” movement as among his justifications for placing the country under Martial Law in September 1972. The “Bagong Lipunan” song, played on radios and TV stations across the Philippines daily during those dark years, was commissioned by Marcos Jr.’s mother, then-first lady Imelda Marcos.

September 21, 2022 will be the 50th anniversary of the declaration of Martial Law. The day was deemed a National Thanksgiving Day and a special public holiday during the Marcos regime.

For human rights activists and especially Martial Law survivors and victims’ kin, the song is a harsh reminder of the thousands who were abused or who went missing during the Martial Law years. A rearranged pop rock version of the song is a staple in Uniteam and Marcos events.

Candidates, both local and national, stayed away from lambasting rivals onstage, instead opting to stick to the unity branding. Even Defensor, who is challenging reelectionist Mayor Joy Belmonte, made no mention of his opponent and instead promised a Quezon City that would include everyone and address post-COVID-19 needs. 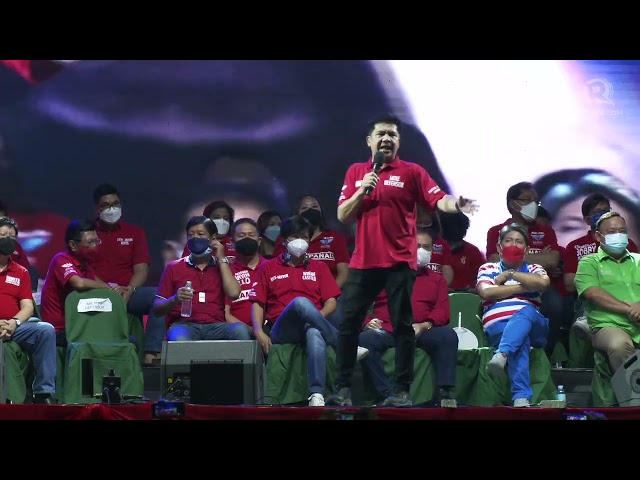 (We will create a program where even the poor can afford to do business, uplift themselves, and provide for their families.)

“Unity” was also seen in at least one pair of politicians who were once bitter rivals – senatorial bet Herbert Bautista who beat Defensor for the mayoralty post in 2010, was also on stage but did not deliver a speech. Bautista’s running mate then was Mayor Joy Belmonte, whom Defensor is seeking to replace.

Defensor – a former student activist and former Cabinet member of the Gloria Macapagal-Arroyo administration – believed that Marcos Jr. would restore the country’s “dignity and honor” but did not refer to the particular administration that caused the loss.

(I may be wearing red today but once you assume power in June…at surely, you will be president, president Bongbong Marcos…all of us – red, white, pink, yellow – will follow you. We will work together and each help in your march to uplift the country.)

To skeptics, the strategy of sticking to a clear campaign message without a clear platform is absurd. But the numbers don’t lie. Marcos Jr., who lost by a hairline to 2022 rival Vice President Leni Robredo, is leading all preference surveys by a mile – a fact proclamation rally hosts Noli Eala and Quezon City 2nd District Representative Precious Castelo made sure to highlight.

Marcos Jr.’s running mate, Davao City Mayor and presidential daughter Sara Duterte, is also the clear front runner in the vice presidential race, despite their tandem’s lack of a clear platform. Duterte did not attend the Amoranto rally in person but sent a video message, which was played on screen.

Marcos Jr., presidential candidate of the Partido Federal ng Pilipinas, and Duterte, vice presidential bet of Lakas-CMD, are running as a tandem under the Uniteam alliance. The four-party alliance counts as its signatories and members of the biggest clans in Philippine politics – Gloria Arroyo, Jinggoy Estrada, and Martin Romualdez, to name a few. Marcos Jr., Duterte, Arroyo, and Estrada are all presidential children.

In the Philippines, where parties are weak, political clans often lend weight to endorsements and alliances.

Quezon City is the most populated and most vote-rich city in the Philippines, with over 1.4 million registered voters in the 2022 polls. In 2016, Marcos Jr. won over Robredo in the city with 412,681 votes to her 297,899, even if a bulk of incumbent Quezon City officials then were allied with Robredo’s party, the then-ruling Liberal Party. – Rappler.com