Press Secretary Trixie Angeles confirmed this to reporters on Friday morning, July 1, while the Philippine News Agency also tweeted a photo of Manalo taking his oath before Marcos.

Manalo, the Philippines’ former ambassador to the United Nations in New York, is the first career diplomat to serve as full-time foreign secretary in nearly two decades. While he served as acting DFA chief for two months in 2017 (he called himself a “transition man” back then), the last career diplomat to serve as DFA chief in a full-time capacity was Delia Albert from 2003 to 2004.

This is significant because career diplomats, who underwent grueling exams and mastered diplomacy – a complex field that requires knowledge of history, politics, and international relations – have always wanted one of their own to lead the foreign service.

The position of foreign secretary, however, has often been given to political appointees – a mixed bag, ranging from the likes of businessman Albert del Rosario, who steered the Philippines’ case against China under Benigno Aquino III, to the likes of Alan Peter Cayetano, a politician whose contradicting statements on diplomacy puzzled Filipinos and foreigners alike.

Manalo, a University of the Philippines economics graduate who joined the DFA in 1979, has a compact four-page list of credentials. This includes at least 12 long assignments abroad, and nearly two dozen international meetings, most of which he chaired.

Manalo served as the DFA’s undersecretary for policy from August 2007 to February 2010, under then-president Gloria Macapagal Arroyo.

He got the same position from April 2016 to March 2017, which covered the administrations of then-presidents Benigno Aquino III and Rodrigo Duterte.

Manalo is also the son of two ambassadors.

His late father, Armando, was ambassador to Belgium and political adviser of the Philippine Mission to the UN. He was also a journalist.

His mother, Rosario, was the first female career diplomat of the DFA. Like her husband, she also once served as ambassador to Belgium, among other posts like Sweden and France. Recently, she was elected rapporteur of a UN committee to stop discrimination against women.

More on the new foreign secretary

In March 2017, Rappler hosted a Rappler Talk interview with Manalo when he was acting secretary of foreign affairs. Watch our interview below: 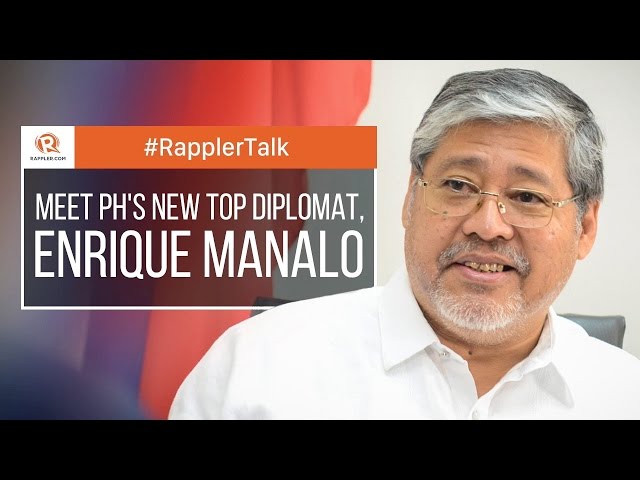