Quezon City authorities check on vaccination cards of commuters on the first day of the DOTR's "no vaxx, no ride" policy on January 17, 2022. Angie de Silva/Rappler

MANILA, Philippines – Social media users slammed the no vaccination, no ride policy of the Department of Transportation following a viral report showing a partially vaccinated commuter who was denied transport.

In a 24 Oras report on Monday, January 17, Diane, a commuter, was in tears when she was not allowed to board the EDSA Carousel bus on the first day of implementation of the public transport ban against the unvaccinated.

(We had been vaccinated. It’s not our fault if our second dose is in February. I got my first dose in December. My vaccine is AstraZeneca.)

Under the Department of Transportation (DOTr) Department Order No. 2022-001, only fully vaccinated people are allowed to board public transportation. There are exemptions for the unvaccinated that have medical reasons or have to do essentials.

On Tuesday, January 18, the DOTr clarified that partially vaccinated individuals, including the unvaccinated, who need to go to work, have medical checkups, or apply for license or passport, among other essential activities, need to have either of the following:

DOTr Assistant Secretary Goddes Libiran said that the partially vaccinated woman was not able to provide any proof that her travel is essential.

Justice Secretary Menardo Guevarra, a senior member of the Inter-Agency Task Force, was asked by Rappler if the guidelines, which treats the partially vaccinated as unvaccinated, would be reviewed. He said it is an “implementation issue,” adding that “the guidelines are pretty clear” anyway.

“Pagdating sa ground, tama ka (When it comes on the ground, yes), there will be practical problems on implementation. Mahirap at mabusisi talaga. (It is difficult and takes a lot of work),” Guevarra said. 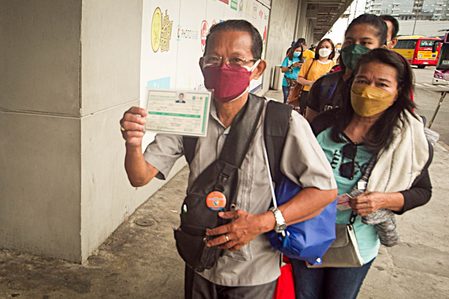 “Kung lahat na lamang po ay papayagan nating lumabas, mababalewala ang ating mga pinaghirapan (If we will allow everyone to go out, our efforts will go to waste). And we wish to reiterate that this said public health policy is being implemented with the foremost objective of protecting our commuters,” the DOTr said.

On Twitter, angry netizens pointed out those who were partially vaccinated suffered from the consequences of the DOTr order, when it was the government’s fault that vaccines arrived in the Philippines later than expected.

Others suggested that partially vaccinated commuters be allowed to board public transportation and be given consideration by enforcers.

They also criticized the policy as anti-poor, anti-commuter, and discriminatory – showing how detached officials are from the reality on the ground.

Instead of implementing policies that are restrictive or punitive, Twitter users said that the Philippine government should instead look at providing incentives or making vaccination more accessible to the public.

Other Twitter users, meanwhile, called on the public to vote for better leaders in the 2022 presidential elections. Netizens could not help but contrast the stances on the issue of the top two presidential bets in preelection surveys – Bongbong Marcos and Vice President Leni Robredo.

In a statement, the Quezon City government said it was saddened by the incident but clarified that the officers who apprehended Diane were from the Highway Patrol Group, not the city hall.

“We appeal to our fellow public servants to be more humane in enforcing policies,” the city government added.

President Rodrigo Duterte in his Monday address said that vaccine mandates are for the public good. His officials echoed the same sentiments, with the DOTr apologizing for any inconvenience but staunchly defending the policy as necessary.

Starting Tuesday, DOTr said that enforcers would start giving out tickets to “erring” drivers who fail to ensure that only fully vaccinated individuals board public utility vehicles. Penalties start from P5,000, up to P15,000, and the possible cancellation of the franchise. – Lian Buan, with a report from Dwight de Leon/Rappler.com