JEEPNEY. A jeep on the Cebu City streets.

Facebook Twitter Copy URL
Copied
Some passengers are forced to walk in Cebu City, where it is usually easy to get a cab or ride a jeep, because of the lack of public transport vehicles on the road

Many of those drivers who had already experienced months without work due to COVID-19 lockdowns and Typhoon Odette, were hoping to get back on their feet when they were hit with this latest roadblock.

Cebu City plans to deal with it through their free bus program.

Mayor Mike Rama told Rappler in a phone interview that the city government’s buses are always ready to ferry commuters who might be affected by the reduced number of PUV drivers.

“We’ve always had our busses if our jeepneys can’t ply the streets. The city will take care of the transport of residents,” he said. The buses are free for residents.

The “libreng sakay” program under the LTFRB is also operating until June 26th. 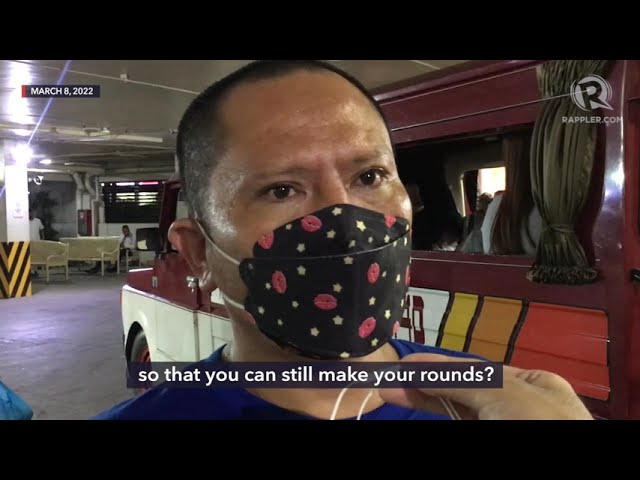 Why is there a shortage?

While drivers have returned to the roads after the lockdowns, their numbers have dwindled.

The drivers were forced to return to their respective homes in the province, while others decided to take on other jobs.

Current fuel prices in Cebu range above P90 per liter for both diesel and unleaded gasoline, making earning a living nearly impossible for many who pay rents on their vehicles. Today’s petroleum prices are almost double the rates at the start of the year.

“There is a domino effect,” Perez said in Cebuano, acknowledging that the increase in fuel prices has not only affected drivers but also commuters.

(We can see it in the streets, even in rush hour, there are still commuters standing…it takes too long to catch a ride because there are drivers who surrendered from traveling because their profit goes straight to buying gasoline)

Perez added that it had also reached a point where the families of jeepney drivers no longer have enough money to buy food and other essentials.

“Naa nay mga pamilya nga gipangutom (there are now families who are starving),” he said.

Because of this, Perez stated that their group would not be petitioning for a fare hike from the Land Transportation Franchising Regulatory Board (LTFRB).

“When will we ever have a reliable mass transit system? I can’t wait for the mini bus network to be in full capacity, and the BRT to be rolled out,” San Juan said.

Perez said that PISTON-Cebu will continue to ask the LTFRB to reduce the restrictions that prevent traditional jeepneys from plying the streets.

“The city government right now is spending billions. More or less 200 million, we have our trucks maintained and fueled with gasoline,” he said in a mix of Cebuano and English.

According to Archival, electric public utility vehicles would reduce the demand for gasoline and give the city an opportunity to move beyond it in the near future. He based this on his experience by attaching a solar-powered fuel system to his vehicle.