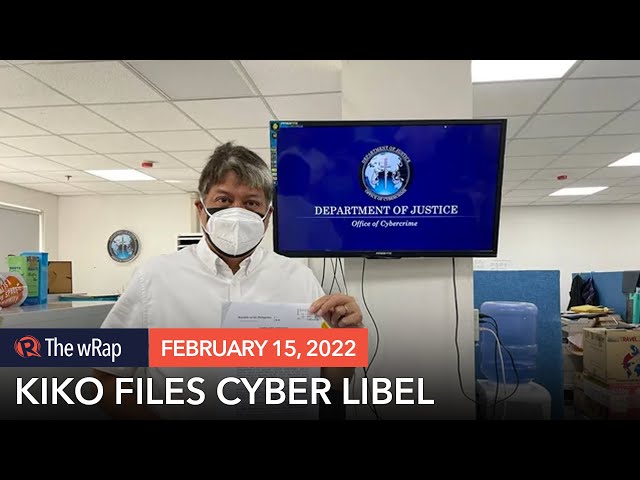 This is the third time Pangilinan sued YouTube channels for libel.

In his latest complaint, Pangilinan said that the videos posted of the YouTube channel Maharlika had no factual basis, and were intended only to damage the reputation of his political career and private life.

Pangilinan also said that tech giant Google, which owns YouTube, must explain how the videos did not violate its community standards after its inaction to the senator’s repeated request to take down the “libelous video content.”

The senator previously filed libel complaints against YouTube channels “Latest Chika” and “Starlet” in July 2021 for similar false videos, which the online platform has since taken down. Pangilinan is running in the May elections, together with presidential candidate Vice President Leni Robredo.

Robredo’s supporters earlier also filed a cyber libel complaint against a retired doctor for accusing her of giving cash to supporters who joined her caravan.

YouTube has been the hotbed for political disinformation and misinformation of several groups supporting certain politicians, including the supporters of the family of the deposed dictator Ferdinand Marcos, that distort historical facts and perpetuate myths about the Marcos family.

Rappler, which is among the 80 fact-checking organizations, says “it is imperative that YouTube introduces policies on labeling false information on their platform as this could affect the Philippines’ presidential elections in 2022.”– Lorenz Pasion/Rappler.com