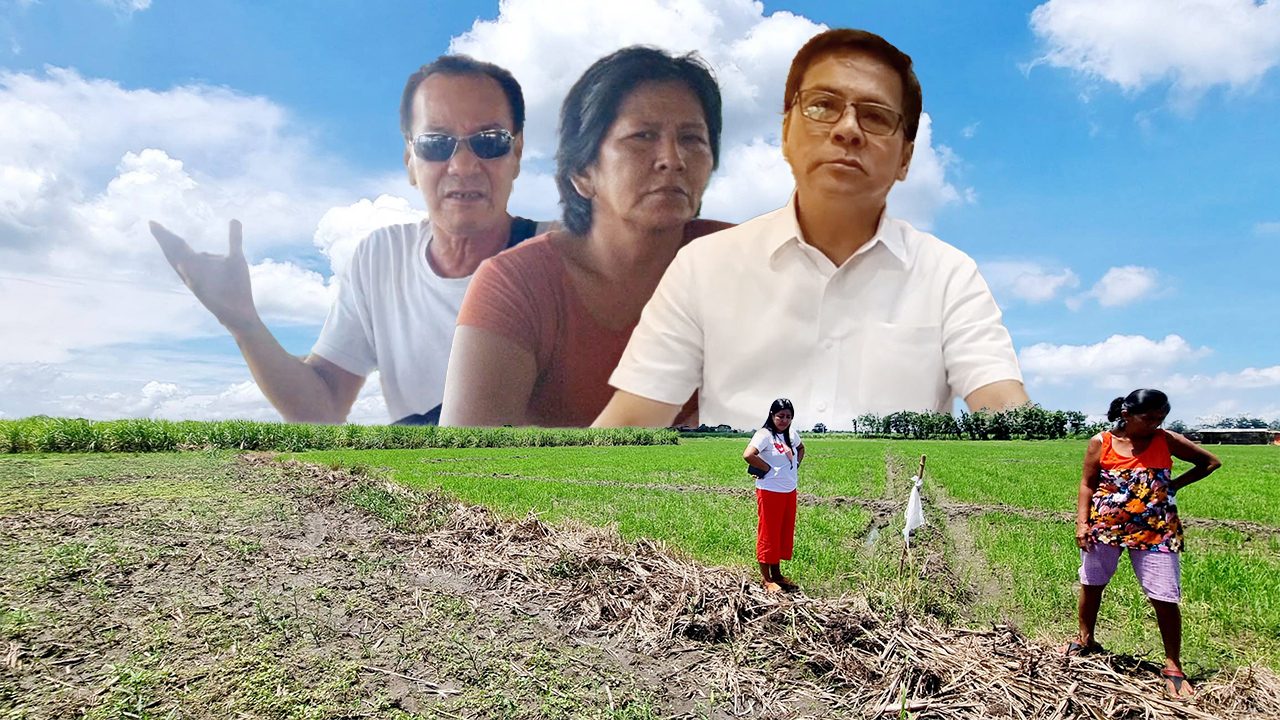 Like many sugarcane workers, Aboy, a 59-year-old widow, does not enjoy the benefits of permanent work.

Since 1998, in sunshine and rain, Aboy has roused from bed just around dawn for the 30-minute walk to a river dam where she gathers the wild-growing vegetable. If she’s lucky, a kind tricycle or motorbike driver stops to give her a ride.

In an interview with Rappler on July 6, Aboy said she earns P5 from every bundle of kangkong she harvests. She could earn P500 if she sells a hundred bundles at day’s end, but this happens rarely.

Kangkong, which is also a household staple in Aboy’s family, becomes a buffer against starvation during tiempo muerto, the “dead season” between planting and harvesting that leaves sugarcane farm hands with no work and income.

Aboy and other agricultural laborers of Hacienda Tinang in Concepcion town were left behind in the country’s early models of agrarian reform.

The 1963 Agricultural Land Reform Code of the late president Diosdado Macapagal and Presidential Decree No. 27, which the late dictator Ferdinand Edralin Marcos issued barely a month after declaring Martial Law in 1972, exempted sugar lands like the Dominican Province of the Philippines’ Hacienda Tinang.

Both leaders said they did not want to jeopardize international commitments, which included the US sugar quota.

It was not until 1988, under the late president Corazon Aquino that sugar lands came under reform with Republic Act No. 6657 or the Comprehensive Agrarian Reform Law (CARL).

The Dominican order offered 200 hectares or 2 million square meters (sqm) of Hacienda Tinang for voluntary distribution to agricultural workers in 1991.

But there is no retirement from hunger, said the farmers of Hacienda Tinang, and still no respite from struggle.

The Department of Agrarian Reform affirmed on June 20 that the 2-million sqm agrarian reform land block in Hacienda Tinang belonged to 178 ARBs, 94 of them being MAKISAMA members who would get 758,000 sqm or over 8,000 sqm each.

It was a hard won victory, coming on the heels of a violent police dispersal of a June 9 cultivation activity meant to assert their right to the land.

Cops arrested more than 90 persons and filed assorted complaints against 83 farmers and advocates.

Aboy has had several brushes with the Villanueva clan.

She told Rappler that there were times when Marlon Layug, the mayor’s brother-in-law, would order her and a sister to vacate their selling spots along the hacienda road. Another time, a straggly vegetable plot Aboy had planted near the roadside was also uprooted and the crops burned, said Abby Bucad, a daughter of a MAKISAMA member.

The cooperative has managed for 20 years the disputed agrarian reform land. It is fighting the DAR June 20 order. Mayor Villanueva told Rappler in a July 6 interview that  there should be more than 400 beneficiaries, to include other members of the cooperative. Villanueva questioned why the DAR acted only in 2018 and why no challenge had been lodged for a long time.

The MAKISAMA farmers said it was because they were kept in the dark for decades about their right to own a portion of the 2-million sqm farmland. It was Aboy who first stumbled upon it, when a fellow worker informed her in 2016 that her husband was one of the hacienda ARBs.

When the cooperative said they had removed her husband’s name from the list, Aboy went to the Department of Agrarian Reform Central Luzon office to find out why. What she got was a certified true copy of the Collective Certificate of Land Ownership Award (CCLOA) that included her husband’s name.

She turned to MAKISAMA for help and the group’s chairman, Felino Cunanan, took over the task of unearthing the truth.

Since 2016, Cunanan and a few of the farmers who share similar stories have gone back and forth to DAR’s regional office in the city of San Fernando, Pampanga and the central office in Manila.

“The talk in the barangay was that the cooperative had a new title,” Cunanan told Rappler.

He was told that 3rd district board member Vernon Villanueva, the mayor’s brother, had possession of the new title – a term the farmers use interchangeably with CLOA.

“To find the truth, to know which one (title) is legitimate, we created a group,” the MAKISAMA leader said in the Kapampangan language.

Cunanan went straight to DAR regional director Judita Tungol and showed her the CLOA. He asked if it was a legitimate copy or if it had been superseded by a newer one.

“‘No, this is the real copy. You cannot change this,’ she told us,” Cunanan said.

Villanueva acknowledged that the DAR issued in 1995 a Collective Certificate of Land Ownership Award for 178 beneficiaries. But the DAR, he told Rappler, started in 1998 inclusion-exclusion proceedings, which allow interested parties to challenge the ARB list.

Cunanan was among around 50 ARBs who faced challenges, said the mayor.

Villanueva’s side said Cunanan was not eligible because he worked from 1987 to 2001 at a construction firm. Villanueva also insisted that the DAR had released a new CLOA, minus around 50 of the original ARBs. The total number of Hacienda Tinang beneficiaries, he said, should be more than 400, instead of the 178 farmers in DAR’s June 20 order. Most of these would be members of the cooperative.

But he admitted that the cooperative, despite its two-decade management of the hacienda, had never gotten its CLOA authenticated.

Cunanan dismissed the mayor’s claim, saying that since visiting the DAR offices, the agency consistently dismissed claims of a new CLOA. The DAR has upheld Cunanan’s status as beneficiary.

The MAKISAMA leader said Tungol even asked the legal office to assist him and other farmers whose names were on the CLOA but still did not have land.

A DAR legal officer in 2017 told Cunanan to file for an individual title. 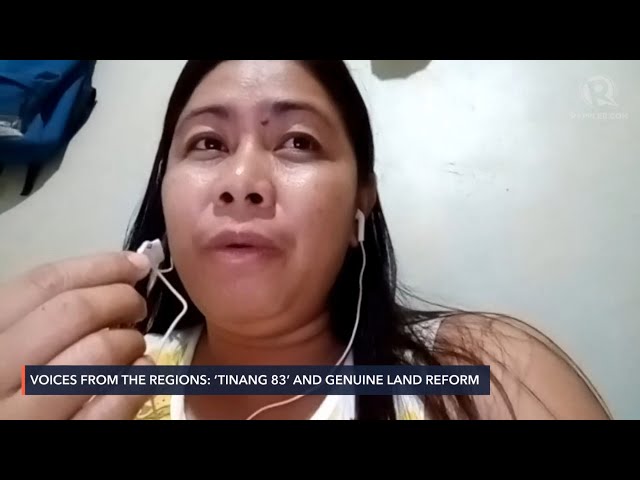 In April 2018, the DAR released the award order which included Cunanan and all of MAKISAMA’s members. In November that year, the certificate of finality was also released.

“And then in 2019, the writ of execution. I thought they (land and individual titles) would be given to us already because we have complete documents,” said the MAKISAMA leader.

But the wait went on and on.

“They told us they had to wait for the Department of Environment and Natural Resources to approve the lot measurements. So we waited for that. And waited during very hard times (during the pandemic),” Cunanan said.

The farmers and their advocates decided to make their move on the eve of the June 10 34th anniversary of the signing of Republic Act No. 6657 or the Comprehensive Agrarian Reform Law.

Then came the dispersal and the arrests.

The upside to that June 9 upheaval was that DAR finally made good on its promise to aid the farmers, releasing its June 20 order after a special task force revalidated the list of the 178 farmer-beneficiaries.

The municipal trial court in Capas, Tarlac on June 27 also validated the farmers’ claim when it junked charges of illegal assembly and malicious mischief against 83 people arrested, noting that their CLOA was “sufficient proof to entitle the holder the right to possess the lands.” Agrarian Reform Assistant Secretary John Laña had told reporters the agency aimed to distribute individual CLOAs before the end of June if there were no other challenges. But on July 6, when Rappler interviewed Aboy and Cunanan, the farmers’ saga took a new twist.