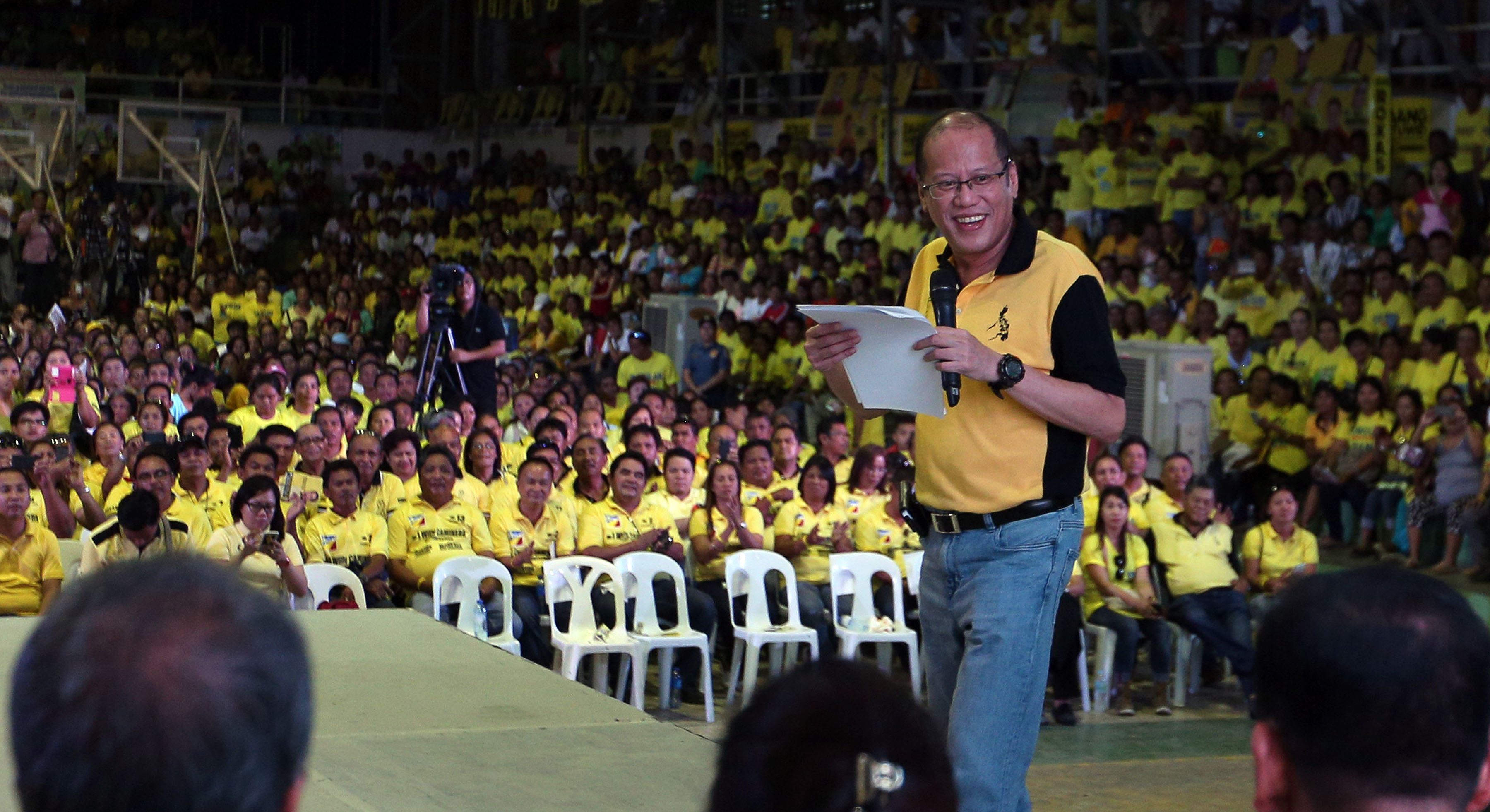 AQUINO YEARS. Then president Benigno S. Aquino III speaks during a political rally in Cebu province during the 2016 campaign.

(If I’m being honest, I was sure he’d survive. Medical science, technology nowadays, allow people to survive longer. They survive. I didn’t think he’d be gone. To me, it was a shock.)

Roxas had long known about Aquino’s many medical woes, but didn’t think the end was near. After all, they’d made plans – a COVID-19 jab, being one of them. They had also talked, in broad terms, about the future of the Philippines.

The hope, it can be assumed, was that the two men would emerge out of quarantine and maybe see each other in person again, with less physical distancing to worry about.

Roxas was among the few who reached the emergency room of Capitol Medical Center just before he was officially pronounced dead at 6:30 am.

(He was there, lying down. I said my formal goodbye. I saluted him and that’s it.)

On the first day of Aquino’s last month as chief executive, the Liberal Party threw a thanksgiving party for its supporters and team right outside the Balay Expo Centro Building in Cubao, Quezon City.

Aquino, an unabashed music (and karaoke, it turns out) fan, had an interesting choice of song: “Impossible Dream” by Andy Williams.

It was, in retrospect, an on-the-nose song choice for a president whose campaign was rooted in eradicating corruption and the promise that Filipinos could dream once again.

The rise to the presidency was swift. Allies were in abundance. But in 2016, as Roxas’ numbers refused to climb and then-presidential candidate Rodrigo Duterte’s continually rose, the headcount at Balay, the LP headquarters, dwindled.

In the years since Aquino stepped down, as is usually the case in Philippine politics, allies turned into political rivals. Some of those who once proudly wore yellow turned tables, kept quiet, or added to the disinformation against the Aquino administration and Aquino himself, the president.

Aquino infamously kept mum, even as he became an easy target for lies and propaganda.

He did, according to Roxas, make a distinction between politicians who were trying to survive and those who were piling it on. “But he was never bitter in our conversations, [it was] never – eh bakit naman si ganito, bakit naman si ganoon? We’re all grown-ups. ‘Yan ang pulitika sa Pilipinas,” said Roxas.

Even if the country after his administration seemed to have flipped upside down, Aquino did not seem embittered – at least to Roxas.

(We didn’t really talk about it, but I got the sense that he was at a loss for words. He wondered if he read the Filipino people wrongly.)

“PNoy was the first one to say nobody is perfect, we are all human pero…he never was bitter…[he was] always hopeful para sa bansa (for the country),” he added.

When Roxas was appointed transportation secretary under Aquino, he made it a point to make their roles clear. “Pormal kong sinabi na (I formally told him), ‘You know, you’re the president, I’ll call you sir and I recognize that you’re my boss. I serve at your pleasure,’” recalled Roxas.

“Pero para nasa maayos ang relasyon natin, hindi, di ba (So that our relationship is clear, right)? May (There’s a) hierarchy. I’ll speak my mind but at the end, it’s your decision,” he added.

The relationship between Aquino and Roxas runs deep. They were colleagues in the House, seatmates in the Senate, running mates in 2010, and allies throughout. They also both happen to be the sons of politicians who fought against the Marcos dictatorship.

So it wasn’t surprising when Aquino reacted with “disbelief and shock” to news that Roxas, at almost 62, was expecting young twins via a surrogate in 2019. The two men had held on to their bachelorship for a long time – Roxas married broadcaster Korina Sanchez in 2009. Aquino was his ninong (godfather).

Roxas had wanted Aquino to meet his young twins, Pepe and Pilar. Aquino turned down the invite, said Roxas, and confided to him then that he was no longer in good health.

The idea of what Aquino missed out on – particularly in his personal life – is what made Roxas first choke up during an hour-long interview.

Looking ahead, Roxas is confident that “history will treat [Aquino] well.” And he’s even more sure that his parents – democracy icons Ninoy and Cory Aquino – will view his presidency and life with pride.

“I think the single biggest motivation ni PNoy is, maging proud sa kanya ang magulang niya, na wala siyang ikahihiya sa magulang niya (for his parents to be proud of him, and that he would not be ashamed of anything). That’s a very strong motivation,” he said.

Roxas last saw Aquino in person in late 2020, at his home along Times Street. He admitted he wasn’t sure Aquino felt lonely, sad, or happy during his final hours. But he was sure of one thing.

“Sigurado, sigurado, puwede niyang harapin nanay niya at tatay niya. And that’s all you can ask for, di ba? Everything else, if at the end, puwede mo harapin magulang mo, ok na ‘yun (you’re able to face your parents, that would be fine). To use his phrase, ‘Chief, boundary na ako.’ So yun na ‘yun,” he said. (Chief, I’ve fulfilled my requirements. So that’s it.)

He paused and considered his next words. “With dispassion, with time, with distance, we’ll see that PNoy did well.” – Rappler.com