MANILA, Philippines – Philippine President-elect Ferdinand Marcos Jr. vowed to uphold the country’s landmark arbitral award that validated its rights in the West Philippine Sea, marking a shift in his position on the 2016 Hague ruling that he earlier appeared ready to cast aside.

At a news conference held a day after a historic canvass, Marcos described the ruling as “very important,” adding it would be a tool his government would use “to assert our territorial rights.”

“It is not a claim. It is already a right, and that is what the arbitral ruling can do to help us,” Marcos said on Thursday, May 26. The Hague ruling, awarded by the Permanent Court of Arbitration to the Philippines, did not rule on territorial disputes but settled maritime dispute involving the Philippines’ rights to exploit resources in its 200-nautical mile exclusive economic zone.

The legal award, which China refuses to recognize, likewise struck down Beijing’s expansive claims in the waterway and found that its activities in Philippine waters – such as illegal fishing and island building – infringed on Filipinos’ sovereign rights.

Marcos’ latest remarks were a change in tune from campaign rhetoric, which saw him pledge to defend Philippine sovereignty in the West Philippine Sea “every single way we can,” yet also claiming that the Hague ruling was “no longer available to us,” suggesting that he would set aside the legal victory.

“We are left only with a bilateral agreement, and that’s where we should, what we should pursue,” Marcos said in February.

Now bound for Malacañang, Marcos on Thursday said, “Considering in the West Philippine Sea, there have been these conflicts, we will not allow a single square – make it smaller a single square millimeter – of our maritime coastal and up to your 200-kilometer [nautical-mile] rights to be trampled upon.”

“How do we do that? We talk to China consistently, with a firm voice,” he added. 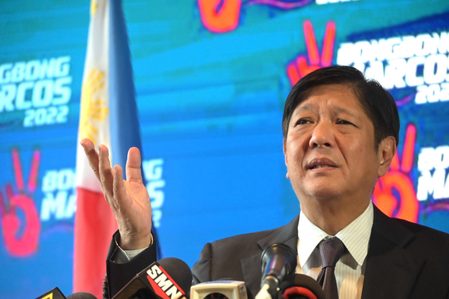 Will Marcos be consistent?

Del Rosario was a key figure behind the Philippines’ decision to build a legal strategy to counter China’s claims in the West Philippine Sea, having been the country’s foreign affairs secretary when it crafted and filed its historic case at the Hague.

But while Marcos’ early words were welcomed, his statements must be backed by consistent and substantial action.

Del Rosario listed at least four ways an incoming Marcos government could follow through, including raising the award consistently at the United Nations General Assembly, consolidating support for the ruling among countries, holding China accountable for environmental “crimes” in the West Philippine Sea, and building up the Philippine military and coast guard’s capability to defend national territory.

“It is our fervent hope that President-elect Ferdinand Marcos, Jr. will abide by his words declared today to protect our West Philippine Sea for the benefit of our countrymen,” Del Rosario said.

Under outgoing President Rodrigo Duterte, the Philippines’ decades-long dispute had been downplayed in favor of loans and grants from Beijing that had yet to deliver six years later. Duterte’s statements on the West Philippine Sea had also been erratic, swinging from vowing to protect the Hague ruling and Filipino fishermen, to likening the legal award to mere paper he’d throw in the trash.

Despite Duterte’s decision to forge warmer ties with Beijing, public surveys in recent years have captured Filipinos’ consistent desire for the government to uphold and assert the county’s rights in the West Philippine Sea, as well as its view that China’s actions in Philippine waters were unlawful. – Rappler.com