PRESIDENT-ELECT. Congress proclaims Ferdinand Marcos Jr. as president-elect of the Philippines on May 25, 2022. 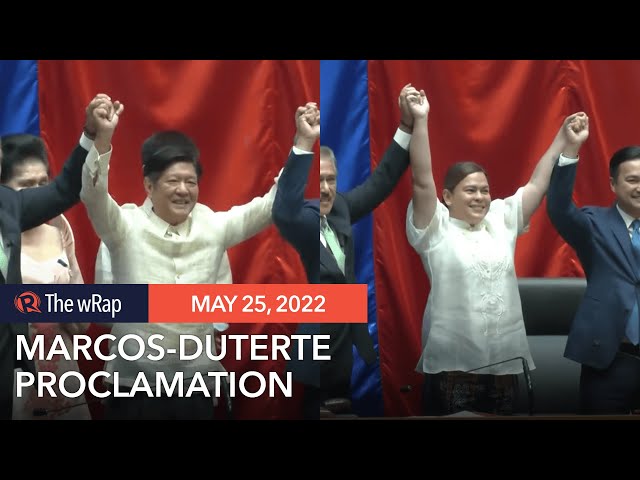 MANILA, Philippines – The Philippine Congress proclaimed Ferdinand Marcos Jr. and Sara Duterte president-elect and vice-president elect, respectively, on Wednesday, May 25, in record pace of only two days of canvassing.

Congress, convened as the National Board of Canvassers (NBOC), started canvassing votes on Tuesday, May 24, and was done by 3:33 pm Wednesday, taking only around 15 hours over two days. In 2016, the House of Representatives and the Senate took three days to complete canvassing for outgoing President Rodrigo Duterte and outgoing Vice President Leni Robredo, which was at the time the quickest in election history. 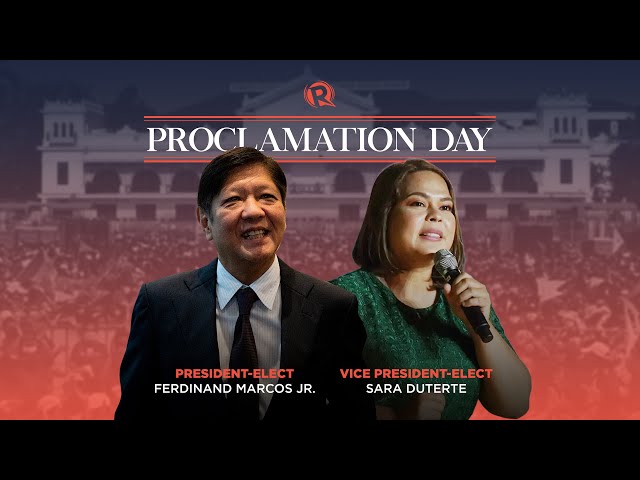 A few minutes past 6 pm Wednesday, both chambers of Congress proclaimed Marcos and Duterte as winners of the 2022 race.

In an impromptu statement after his proclamation, Marcos told media: “I am humbled because for anyone in public service or in a public life, the most valuable thing you may receive from a fellow citizen is their vote.”

Marcos did not entertain questions from media.

Throughout the day, several certificate of canvass (COCs) were not found in the ballot boxes, driving Senator Miguel Zubiri to lash out at the Commission on Elections (Comelec), whose commissioners and chairperson are still up for confirmation. “How difficult was that to do? How can we confirm them?” a furious Zubiri said.

Comelec officials reasoned out it was due to lack of sleep. They were allowed to send the COCs through Viber and then testify virtually on their authenticity.

The COCs from Argentina and Syria could not make it to the House of Representatives in time, but Congress decided to terminate the canvass anyway because Zubiri said “they would not change the results.” At 3:33 pm, the canvass was officially done in record time.

Section 4, Article VII of the Constitution says the president and the vice president shall officially take office noon of June 30, but Sara Duterte will be holding her inauguration in Davao City on June 19, or 11 days before the set constitutional time. The Comelec said Duterte can hold her inauguration on June 19 but she will still officially assume the vice presidency 12 noon of June 30.

Shortly after canvassing closed, Marcos arrived at the Batasang Pambansa with his family, including former first lady Imelda Marcos, who was mostly absent from his 2022 campaign. Imelda Marcos is appealing her conviction for seven counts of graft and is free on bail for humanitarian considerations out of old age. Senator Imee Marcos, who is part of the Senate panel in the canvassing, arrived in Batasan much earlier. 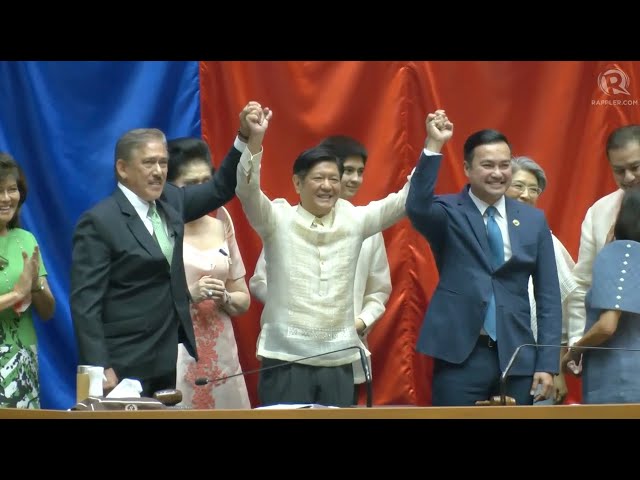 Duterte, meanwhile, arrived via helicopter a little before 3:40 pm, alongside former president and Lakas-CMD president emeritus Gloria Macapagal-Arroyo and her campaign manager, Hugpong ng Pagbabago chairman and Davao Occidental Governor Claude Bautista. House Majority Leader Martin Romualdez, co-campaign manager for Duterte, greeted her party upon their arrival. Romualdez is the cousin of Marcos and is poised to be elected House speaker when the 19th Congress is called into session.

The 2022 canvassing was the “fastest in history,” according to Zubiri. Speaking to media in a chance interview, Zubiri, who won a fresh six-year term in 2022, attributed its speed to the “magnanimity” and “graciousness” of other candidates, who said they would not be objecting to the canvassing of valid COCs in the count.

In 2016, Congress finished the canvass at 7 pm on a Friday and deferred proclamation to the following Monday. For Marcos and Duterte, not only did the canvass take a mere two days, Congress also worked past the set 10 pm work stoppage on Tuesday. 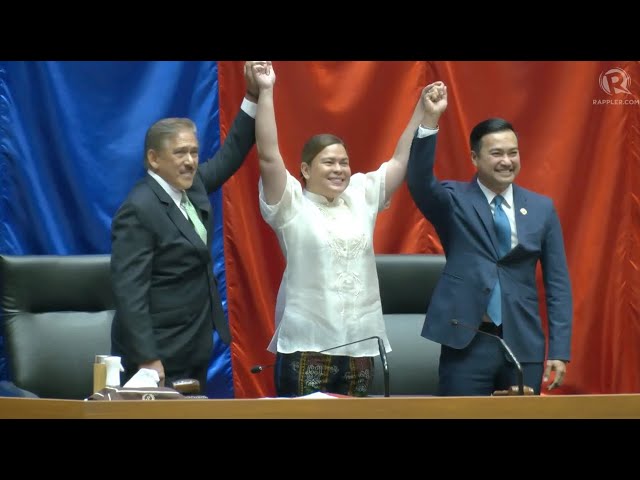 When Congress voted on Wednesday via viva voce voting to adopt the committee report of the canvass, the six lawmakers of the Makabayan bloc yelled their nay votes loud enough to be heard in the plenary hall. Some in the gallery laughed. After that, they all left the hall.

“We walked out because we do not want to glorify the coming of a dictatorannical regime as represented by the Marcos-and-Duterte tandem,” Bayan Muna Representative Carlos Zarate told Rappler. 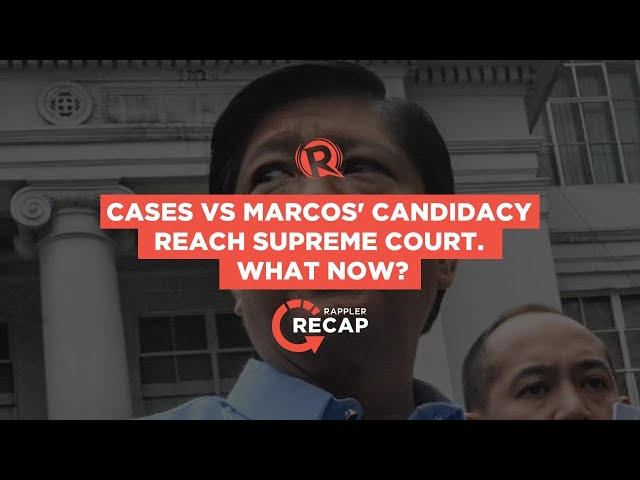 The Supreme Court is currently tackling two petitions to void Marcos’ candidacy and, in effect, his win. Petitioners requested for a temporary restraining order (TRO) or to stop the canvass and the proclamation, but the High Court’s 15-day deadline for Marcos, the Comelec, and Congress to respond to the petitions effectively meant there can possibly be no TRO this week.

The Supreme Court en banc will meet on June 14 as they are currently on a recess. But even though on break, the en banc made the move of requiring a response to the petitions.

The two petitions against Marcos, although premised on the same ground which is his 1997 conviction for not filing his tax returns, are of two different types: cancel the certificate of candidacy (COC), and disqualify.

If the cancel COC case is granted, it is clear the winner would be the second placer, who is Robredo. If the disqualification case is granted, there is debate on whether it would still be Robredo or Duterte as the vice president who would become president. 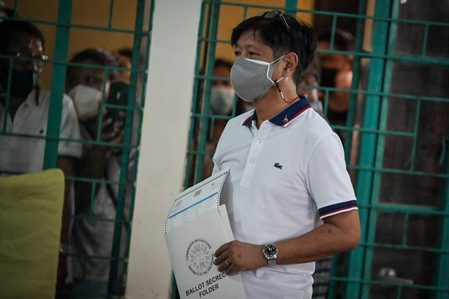 –with reports from Bea Cupin/Rappler.com