A team is seen currently conducting an ocular inspection at the National Museum where President-elect Ferdinand Marcos Jr. is expected to be sworn in as the 17th chief executive, on June 2, 2022. Rappler 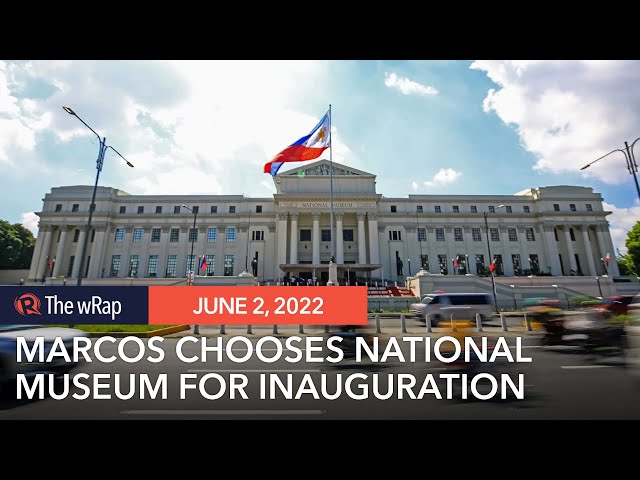 MANILA, Philippines – Ferdinand “Bongbong” Marcos Jr. will take his oath as the 17th president of the Philippines at the National Museum premises on June 30, his camp said Thursday, June 2.

It’s unclear whether the oath-taking will be held indoors or outdoors, but according to incoming Presidential Management Staff Secretary Naida Angping, “the building and its surrounding areas match our requirements for President-elect Marcos’ inauguration.”

“Preparations are already in full swing to ensure that it will be ready by then,” said Angping.

Marcos was elected by 31 million people or an overwhelming 58% of the votes, the first majority president to be elected in the country.

The National Museum, located in the heart of Manila, has a picturesque white neoclassical facade with a flagpole at the center. The driveway and entrance to the museum is elevated.

The Marcos camp in a press release called it as a “historic venue.”

“Formerly known as the Old Legislative Building, it has served as the venue for the inauguration of former Presidents Manuel L. Quezon (1935), Jose P. Laurel (1943), and Manuel Roxas (1946),” said the Marcos press release.

Bongbong Marcos’ father, the late dictator Ferdinand Marcos, presided over the Senate as Senate president in the same building.

But when the elder Marcos won a second presidential term in 1969, it’s also where protesters trooped to oppose his leadership, marking the start of the First Quarter Storm or a period of civil unrest in the country.

A massive student rally surrounded the old legislative building on January 26, 1970, the same facade which could see the son take his oath on June 30.

The National Museum, the old Legislative Building, was the venue of a massive protest in 1970 led by the likes of Edgar Jopson triggering the First Quarter Storm and led to the proclamation of martial law in 1972.
Photo from Benjamin Pimentel’s “Life and Struggle of Edgar Jopson” pic.twitter.com/FhZzl20i0M

The First Quarter Storm eventually led to Marcos proclaiming Martial Law in 1972, a dark era for the Philippines, but which the family had tried to rebrand as a golden age as part of a campaign to return to power. He abolished Congress through the 1973 Constitution, a railroaded charter that was upheld by the Supreme Court in a decision still blamed today for enabling the repressive dictatorship.

If Marcos Jr. were to be inaugurated in the old session hall indoors, it would still be in the shadow of its history being padlocked in 1973 when his father abolished Congress.

The first plan was for Marcos to take his oath at the Quirino Grandstand, the same venue as the dictator’s inauguration. But the area still houses several COVID-19 field hospitals.

“The safety and welfare of our people are paramount. As such, we chose to avoid disrupting the medical care being given to the COVID-19 patients housed there. That’s why we opted for the National Museum as the venue,” Angping said.

Who will administer oath?

Supreme Court spokesperson Brian Keith Hosaka said the office of Chief Justice Alexander Gesmundo has not received any request, “but I don’t know with the Offices of the Associate Justices.”

Other government officials, including mayors and even barangay captains, are empowered by Republic Act 10755 to administer the oath of the President. – Rappler.com