ECONOMIC PLANS. President-elect Ferdinand 'Bongbong' Marcos Jr. holds a press conference with his economic team behind him on June 20, 2022. 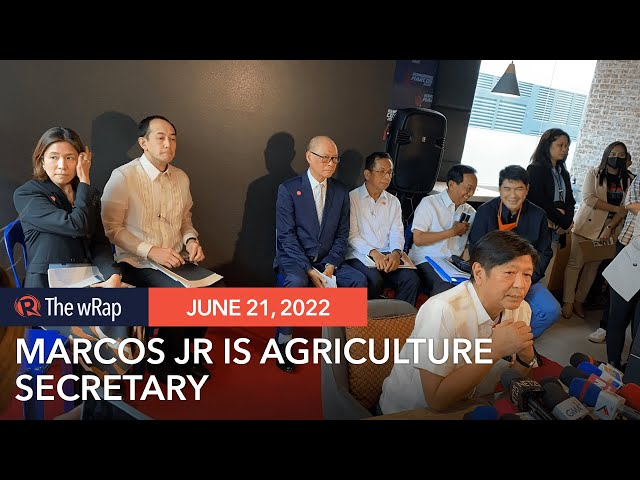 “I have decided to take on the portfolio of secretary of agriculture at least for now, and at least until we can reorganize the Department of Agriculture in the way that will make it ready for the next years to come,” said Marcos.

This is only the second press conference of Marcos since winning the presidential elections on May 9, and he took more questions than the last, with his economic team behind him. Budget Secretary Amenah Pangandaman, Executive Secretary Vic Rodriguez, Finance Secretary Benjamin Diokno, Economic and Development Secretary Arsenio Balisacan, Public Works Secretary Manny Bonoan, and Social Welfare Secretary Erwin Tulfo joined the press conference but did not speak.

“It’s important that the president take that portfolio so that not only to make it clear to everyone what a high priority we put on the agriculture sector, but also as a practical matter so that things move quickly, because the events of the global economy are moving very quickly. We have to be able to be agile,” said Marcos.

Marcos said the agriculture sub-agencies that need review or restructuring are the National Food Authority (NFA) and the Food Terminal Inc. (FTI), saying “they have changed their functions over the years, and maybe it’s time to return them [to their original functions.]”

“We’ll try and increase production as we come into the harvest period after, during, and before the rainy season. Hopefully we can counteract some of the increases in prices,” said Marcos.

A thorny agriculture issue is the rice tariffication law enacted by President Rodrigo Duterte, which had hurt farmers. The law removed import restrictions in favor of higher tariffs to control rice coming in from other countries. Farmers said they were not prepared to compete with imported rice as they find it hard to bring down production costs.

Marcos was not so categorical if he was open to amending the law, as the other candidates expressed during the campaign. What Marcos said was he wanted to invest more for farmers by using funds collected through the rice tariffication law

“There’s P10 billion that is returned to the farming community. Maybe we can have a look at that and see. And maybe now that we are in a situation where we very much have to increase production and we very much have to support the farmers, maybe we can look at that, ‘yung 10 billion kung minsan meron pang unspent, so puwede pang gamitin ‘yan (sometimes there is an unspent amount for the P10 billion, so we can still use it.)”

Marcos is yet to name his health, foreign affairs, transportation, energy, and environment secretaries. He said “the shortlist is getting shorter.”

Marcos will take his oath on June 30. – Rappler.com