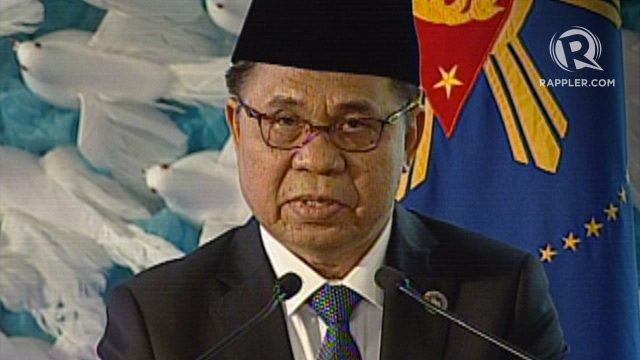 DAVAO ORIENTAL, Philippines – Bangsamoro Autonomous Region in Muslim Mindanao interim Chief Minister Ahod Balawag “Murad” Ebrahim expressed confidence that that the regional government can sustain its transformation into a progressive part of Southern Philippines in time for the BARMM elections in 2025.

Speaking during the ceremonial opening of the Bangsamoro parliament in Cotabato City on Thursday, September 15, Ebrahim cited data from the Philippine Statistics Authority (PSA) that showed a significant reduction in poverty incidence in the BARMM.

“According to the PSA, the BARMM has recorded the most significant reduction in terms of poverty incidence among families, from 55.9% in 2018 to 29.8% in 2021. The BARMM recorded the highest and the only double-digit reduction in the country,” said Ebrahim.

He also said the war-torn region has ceased to be an economic laggard, recording an unprecedented growth of 7.2% in agricultural production and fisheries in 2021.

With a relatively high economic growth of 7.5%, that “makes us the second-fastest growing region in the country,” said Ebrahim.

Ebrahim said BARMM ranked first among the country’s fish-producing regions during the second quarter of 2022.

He told President Ferdinand Marcos Jr., who keynoted the parliament’s ceremonial opening, that the improved peace and order situation in the Bangsamoro region was attracting many investors.

He said the region recorded P8.1 billion in investments since 2019 – the year the BARMM replaced the Autonomous Region in Muslim Mindanao – and much more than what the ARMM saw in around 30 years.

The investments the BARMM recorded since 2019 increased the special region’s employment rate by some 6%, according to Ebrahim.

Ebrahim said the regional government has invested heavily in high-impact infrastructure projects such as the construction of 457 kilometers of roads, 34 bridges, 26 flood-control, and 170 water system projects.

It also built 465 houses for the region’s “poorest of the poor,” and at least 3,200 others were being constructed for more needy families, he said.

Education has also been one of the priorities in the BARMM – the regional government built 482 new school buildings and awarded some 27,300 students throughout the region with scholarships.

In the process, he said, the regional government had to buy 95,188 chairs for students across the Bangsamoro region.

“These are just some of our strategies to ensure no Bangsamoro child is left behind. And in the process, we aim to produce at least one professional per family,” said Ebrahim.

Marcos renewed the national government’s commitment to pursue the peace process in the BARMM based on the Comprehensive Agreement on the Bangsamoro (CAB), the Bangsamoro Organic Law (BOL), and the BTA extension law to help its leaders realize their vision of a “united, enlightened, self-governing, peaceful, just, morally upright, and progressive Bangsamoro.”

“We are committed to sustaining the momentum,” said Ebrahim “We will complete all the remaining transition priorities and finish setting up the government not only ready for a peaceful and orderly election in 2025 but also a government capable of continuing the transformation of the BARMM into a progressive and responsive region.” – Rappler.com