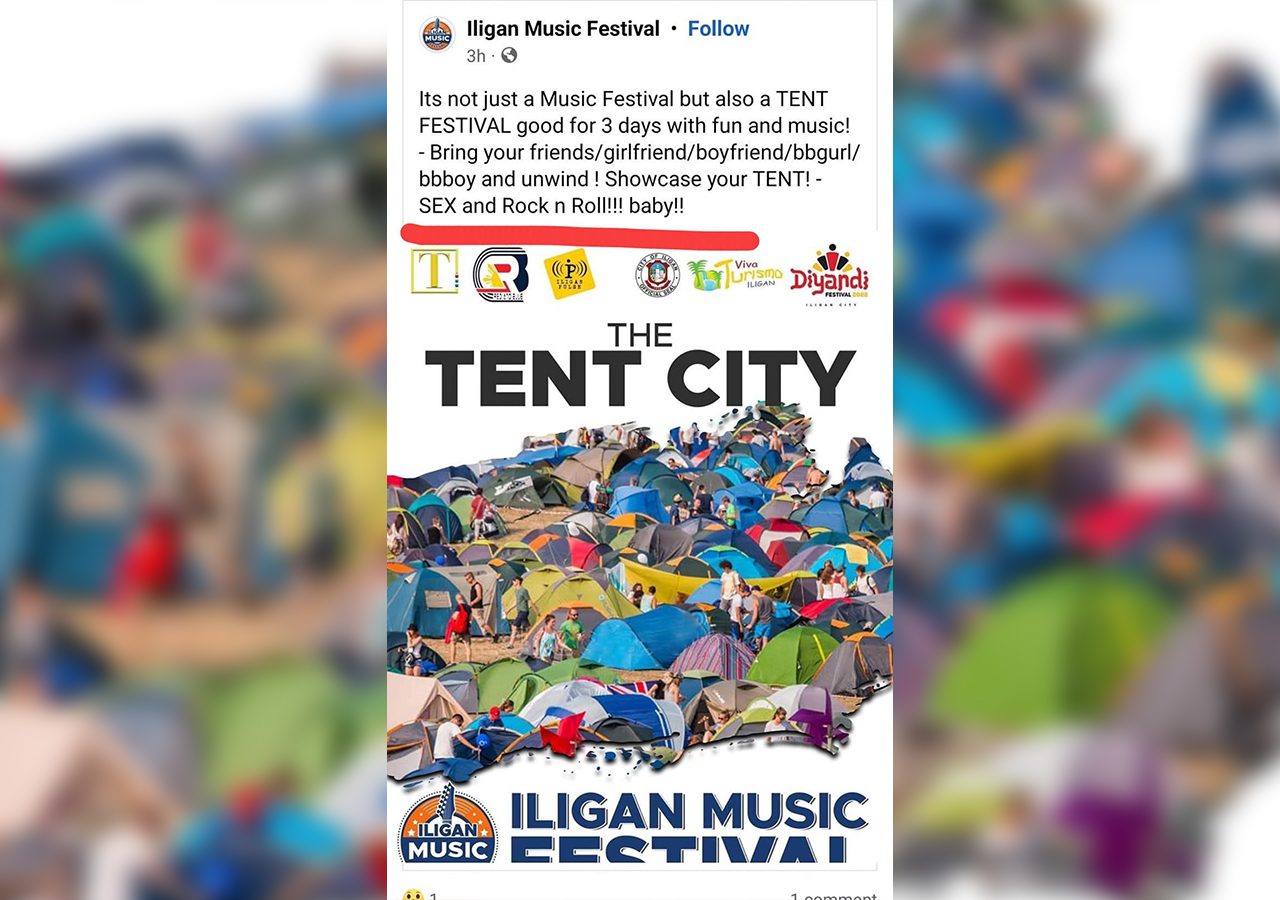 ILIGAN CITY, Philippines – The organizers of the three-day Iligan Music Festival are on their own – and it’s final.

The city government has delisted the three-day Iligan Music Festival as a major Diyandi Festival activity ahead of the citywide celebration of the feast of Saint Michael the Archangel on September 29.

The decision was announced with finality on Friday, September 9, days after Iligan Mayor Frederick Siao ordered it removed from city hall’s list of fiesta activities following an uproar over a sexual innuendo-loaded teaser organizers posted on the music festival’s Facebook page.

But city hall’s fiesta executive management board found more problems with the scheduled music festival when its members deliberated late last week whether or not the local government should reconsider the decision to delist the Woodstock-inspired event.

Clerigo said it was a risky venue for a three-day event patterned after the first Woodstock Rock Festival in the United States in 1969.

The fiesta board issued a resolution, stating that if the organizers decided to pursue their plan to stage the music festival, then they can do so as a private group without any support from the city government.

The board also suggested that organizers negotiate for a new and appropriate venue, finalize an agreement with the landowner, and reschedule the music festival to give them more preparation time.

The organizers’ problem, however, is that they already sold tickets with prices ranging from P1,000 to P5,000, and they have paid Metro Manila-based bands to perform during the music festival.

Amir Archival Aluk, the executive producer of the music festival, wrote to Iligan City General Services Office chief Bong Capitan on Friday, September 9, to ask permission for the use of the city hall-run Wet Park.

One of the music festival’s organizers, Dr. Charles Marquez, said on Saturday, September 10, that city hall already issued a permit, a claim that could not be independently validated as of this posting.

Marquez said the show would go on as a purely private event despite city hall’s withdrawal of support.

Marquez said his group took the criticisms of the city hall board constructively, and these would help organizers plan better and execute it effectively.

He said the organizing group “is learning from the significant setback which definitely will [result in] a much better fiesta experience for everyone… We thank everyone for your understanding. We will see you have fun with us at the Iligan Music Festival!”

Organizers drew flak in the predominantly Catholic city early last week over a sexually-suggestive teaser posted on their FB page to promote the music festival.

The post was immediately taken down and organizers apologized for it, but not after it went viral on social media and drew public criticism and city hall’s rebuke. – Rappler.com