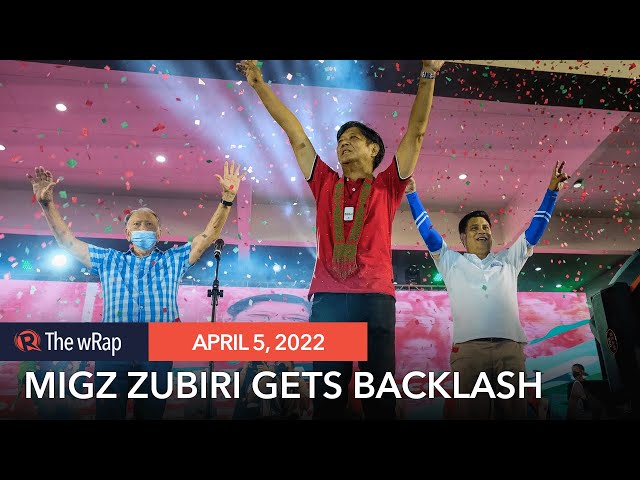 BUKIDNON, Philippines – Reelectionist Senator Juan Miguel Zubiri received a backlash from supporters of the presidential bid of Vice President Leni Robredo in Northern Mindanao over his father’s declaration of support for former senator Ferdinand “Bongbong” Marcos Jr., and his March 31 endorsement of the late dictator’s son.

Now, organized supporters of Robredo and her running mate Senator Francis “Kiko” Pangilinan in Bukidnon and elsewhere in Northern Mindanao have started campaigning against Zubiri to send a message that his political family’s support for the scion of the Marcos family has consequences and would cost him votes.

The pronouncements of the Zubiri family members did not sit well with the vice president’s supporters in Northern Mindanao, a region where Marcos lost to Robredo in the vice presidential race in 2016. Robredo also defeated Marcos in Bukidnon province that year.

Senator Zubiri was initially a guest candidate in the Robredo-Pangilinan ticket, and those working in the vice president’s campaign said it was time for her supporters to drop the legislator from their list of senatorial candidates for good.

Lawyer Angeline Marie Carrasco-Genoso, one of those behind the Lawyers for Leni in Cagayan de Oro, said, “I could safely say that this is the common sentiment of the Leni supporters I know. Whatever reasons Leni had for Zubiri to be included in her slate despite Zubiri’s support to Marcos Jr. that we can only respect. But definitely, Zubiri is no longer included in our list.”

Bukidnon-based businessman Stephen Sanchez, lead convenor of the Valencia City for Leni, said his group was unfazed by the Zubiri family and their party’s support for Marcos, and it did not come as a surprise to him that the reelectionist senator showed up for the Marcos-led rally in the province.

Sanchez said that while the Zubiris’ support for Robredo factored in her win against Marcos in Bukidnon in the 2016 elections, hundreds of volunteer workers in the province were campaigning tirelessly on the ground “which is the alternative route in the absence of support from local politicians.”

Endorsements by local politicians were welcome, he said, “but their endorsements do not automatically translate into a win.”

Sanchez cited the case of President Rodrigo Duterte’s successful campaign in 2016 despite him having only a handful of big-name politicians on his side.

“In Valencia, whenever we go to barangays and gather people for our campaign sorties, the parish priests and church leaders are the ones facilitating,” he said.

Sanchez said many of the Robredo campaign’s barangay coordinators and precinct leaders in Bukidnon come from grassroots-level and church organizations.

Senator Zubiri also suffered a backlash on social media. On April 1, a day after he called Marcos “our president” during the Bukidnon rally, #DropZubiri trended on Twitter and Facebook along with #BoholisPink.

Netizens criticized Zubiri and called him a “trapo” (traditional politician) and a “freeloader” who decided based on winnability rather than on values and principles.

But in Bukidnon, he sang to a different tune, called Marcos “our president,” and thanked all the province’s mayors and vice mayors for coming to the UniTeam-BPP rally.