The Philippine Drug Enforcement Agency (PDEA) has started an investigation into the circumstances surrounding the controversial November 6 beach raid in Davao de Oro following allegations of a cover-up and that its agents allowed many partygoers, including the then-Davao City information officer Jefry Tupas, to escape.

Tupas “is part of the investigation” ordered by PDEA director general Wilkins Villanueva, the agency’s director for the Davao region, Aileen Lovitos, said on Wednesday, November 10.

The controversy cost Tupas his job at the Davao city hall. She was fired by Mayor Sara Duterte for “being involved in a raid” just as she signified her intention to resign on Sunday, November 7. Tupas has admitted being in that beach party hosted by PDEA’s primary suspect, Revsan Ethelbert Elizalde, but claimed that she and two of her companions already left it by the time law enforcers staged the raid, a narrative rejected by those arrested at the Sea Eagle resort in Barangay Pindasan, Mabini town on Saturday, November 6.

On Tuesday night, November 9, the online-based Newsline Philippines showed an interview with several arrested suspects who claimed that law enforcers let go of the allegedly name-dropping Tupas, her boyfriend, and over half of the partygoers.

They said Tupas introduced herself as “staff ni Inday Sara” (Inday Sara’s staff) before she, her boyfriend, and another companion were allowed to leave the resort.

During an online news conference organized by the AFP-PNP Press Corps in southern Mindanao, Lovitos denied that law enforcers allowed many to escape, but she corroborated claims by those arrested that there were many partygoers and beachgoers in the resort at the time of the raid.

According to several detainees at the NBI regional office in Davao City, there were at least 50 people in Elizalde’s party, including Tupas, during the PDEA-led raid. The law enforcers were selective in arresting partygoers, they alleged. 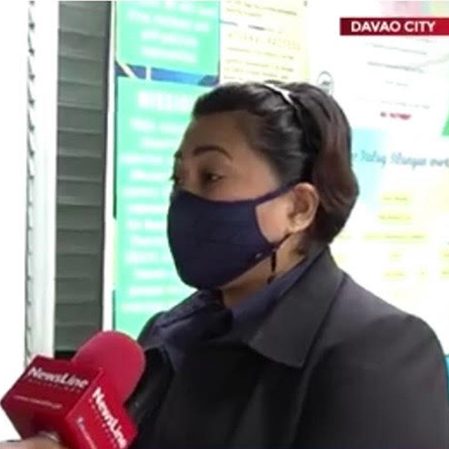 They also claimed that they were photographed with some of the things authorities seized from Tupas.

“It was a planned operation and we were focused on our targets,” Lovitos said as she dismissed allegations of a cover-up as mere “speculations.”

Lovitos said the 17 partygoers, including the 33-year-old Elizalde, were the PDEA’s only targets, and the priority.

She however declined to say if Tupas was there at the time PDEA agents, backed by the town police and the National Bureau of Investigation (NBI), raided the beach resort.

Neither did Lovitos say if Tupas was in the PDEA’s watchlist, saying it was “highly confidential.”

“Our investigation is ongoing to shed light, and find out what happened, what transpired, during the operation,” Lovitos said, “The person mentioned (Tupas) is part of the investigation.”

She declined to comment on Mayor Duterte’s statement on Tuesday that Tupas was notified that her services were terminated because she was “involved in a raid.”

Lovito said, “I can’t decipher that. The mayor has issued a statement. Miss Tupas has issued her statement. Let us leave it at that.”

The PDEA filed a complaint against the Davao City-based Elizalde and 16 other arrested suspects for violation of the law on dangerous drugs before the Provincial Prosecutor’s Office in Davao de Oro.

Authorities said the group was caught with LSD, meth, the stimulant Ecstasy, and other party drugs worth some P1.5 million. –Rappler.com