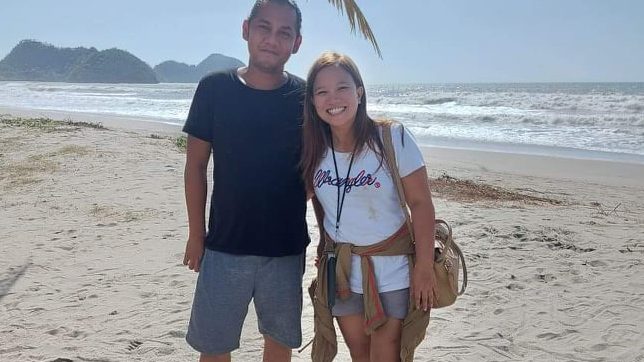 Typhoon Odette survivors Peter Jacusalem and Buenjurin Pananguiton on the beach on December 18, the day they were supposed to have their wedding.

Facebook Twitter Copy URL
Copied
Where other couples may feel that two strikes make for an unlucky start to a new life, Buenjurin Panaguiton and Peter Jacusalem, survivors of Typhoon Odette, only feel gratitude

Scattered amid cries of lament by Buenjurin Silvato Panaguiton in two eight-minute videos posted on her Facebook page are short prayers of gratitude for surviving Typhoon Odette (Rai) and plans to give neighbors and strangers the food they had prepared for their wedding.

Just before the typhoon hit their home city of Sipalay in Negros Occidental, 30-year-old Buenjurin and 32-year-old seafarer Peter Jacusalem were looking forward to their December 18 beach wedding. The COVID-19 pandemic had already trashed Buenjurin’s walk down the aisle on September 25.

Buenjurin and Peter, both residents of Barangay Nabulao, were  finalizing plans for a wedding feast involving two big clans when foreboding news came on the afternoon of December 16.

Typhoon Odette had turned into a major howler that could affect the province’s southern towns.

They heard the news by word of mouth, having been too busy for social media. They were staying overnight in the house of Peter’s older sibling in Barangay Gil Montilla, which locals still call by its old name, Hacienda Montilla. It was nearer the Matlag Farmhouse, where the wedding would take place by the city’s famed clear waters.

The neighborhood turned out to be among the worst hit by Odette. The typhoon began lashing at the city in the evening of December 16 up to the first few hours of December 17.

Power went down around 8 pm, Buenjurin told Rappler in an interview on December 24.

“First, it was just a strong wind, then it started raining hard around 10 pm,” Buenjurin recalled the first few hours of their night of horror.

“By 11 pm the rain and wind were so strong, we thought the house would be ripped apart,” she said in the local Ilonggo language. “Everything was shaking. We had packed and were ready to evacuate. Water was already coming inside the house and we could hear the roof moving.”

They were hoisting their bags when they heard a cry from outside.

“Peter took a flashlight to check. There were three families outside,” said Buenjurin.

In a few minutes, seven families in all had stumbled into her in-laws’ yard, begging for shelter.

The couple knew they could not turn away neighbors. They also knew that with a big group of evacuees, including children, walking to the evacuation center in pitch-dark surroundings could result in disaster.

“They told us they were so happy to see our light,” said Buenjurin. “They told us the wind was very strong outside. We believed them because every time we opened the screen door, some of us had to brace against it just so it didn’t get ripped off.”

The evacuees told them how bad it was in the neighborhood.

“They  could not see anything. Two families  just groped their way through the dark, using their feet to check for obstacles,” Buenjurin recalled their neighbors saying. “They survived because they held tight to each other’s hands. But the water took off with their backpack.”

The arrivals kept on crying, because other members of their families were still trapped in homes.

“Kag may na anod na kuno.” (And some people had already been swept away.)

One teenager fainted just after walking through the door, having battled through rain and winds that were already nearing their maximum strength of 195 km/hr.

“They were all wet and none of them had brought clothes. Our few sets of clothes that we had just washed and ironed that afternoon, we just gave it to them.”

Buenjurin didn’t have much because she works in Silay City, just north of the provincial capital, Bacolod City, and was just one a one-month leave.

She also has a habit of regularly clearing out her closet. “Akun abi bayo few lang gid kaayu, mam, ky pag wala ko na gina gamit mga 5 months, gina hatag ko nana.” (I have very few clothes because I give away anything I haven’t worn for five months.)

They  all survived the night. The house held although the roof finally flew off in the last half-hour of Odette’s pummeling.

Mid-morning of December 17, Buenjurin and Peter took off on a motorbike. They were worried for their parents, who lived elsewhere.

Buenjurin documented the entire harrowing ride through flooded roads and thick mud, and barely there lanes pockmarked with rocks washed down mountain slopes.

If not for the water, she said, some homes look like they had been crushed in an earthquake.

They saw rescuers carrying injured survivors, dead animals floating in farmlands turned into lakes, people trudging with babies and toddlers in their arms, or towing whatever they had salvaged.

Both sets of parents were frightened but unharmed.

“But we’re still missing people. Others were found on trees or shrubs, drowned by floods,” Buenjurin said.

The breakfast meant for their entourage was quickly distributed among neighbors. The pig for the lechon was butchered and grilled and given away.

The couple knew that was not enough. They reached out to friends in Sipalay and neighboring towns, down to Bacolod. Peter also called colleagues who were not affected by the typhoon. Friends and relatives still came down on December 18, to help with aid and packing.

Within two days, they were roaming Sipalay on a small truck with Singles for Christ friends, as a small, private initiative.

“We don’t care, they don’t care; the times are too critical to let politics intrude,” Buenjurin said.

They focused on areas that had not yet been reached by city government teams. They sent receipts to donors and listed goods they’d given and where to city hall.

Sipalay Mayor Gina Lizares welcomed all aid-givers but asked teams to coordinate, the better to spread out aid.

Their team also interviewed survivors and passed on their other needs to city officials.

They are using a second batch of cash donations to purchase candles and more rice, blankets and mats.

Where other couples may feel that two strikes makes for an unlucky start to a new life, Buenjurin and Peter say they only feel gratitude.

“We’re the lucky ones. So many don’t have homes. Our farmers won’t have food and money until they can replant and harvest again. Many fishermen can’t go out to sea because they’ve lost their boats,” Buenjurin pointed out. “The least we can do is help.”  – Rappler.com