Oct 19, 2021 6:38 PM PHT
Lian Buan
Facebook Twitter Copy URL
Copied
'As the Ombudsman, he should be the first to promote the spirit of transparency and accountability. Why is he the first to prevent us from doing such?'

The National Union of Journalists of the Philippines (NUJP) said that transparency in government is a token act if the new moves of Ombudsman Samuel Martires to amend rules on Statement of Assets, Liabilities and Net Worth (SALN) were to ripen into law.

“Restricting access to the documents makes transparency in government almost a token act given the Ombudsman’s apparent hesitation to conduct lifestyle checks and other investigations,” said the NUJP in a comment on Tuesday, October 19.

The NUJP was commenting on a draft proposal by Martires submitted to the House of Representatives to amend Republic Act 6713, the Code of Conduct of Public Officials, which covers the rules on SALNs.

The salient points of the proposed amendments were:

The amendments, first reported by the Philippine Center for Investigative Journalism (PCIJ), would further restrict public access to SALNs.

Currently, Martires’ circular restricting public release of SALNs has survived constitutional challenge in the Supreme Court (SC), although that petition was resolved mainly on procedural grounds. This circular has allowed President Rodrigo Duterte to keep his SALNs since 2018 a secret.

But these amendments can ripen into law if legislators agree.

“As the Ombudsman, he should be the first to promote the spirit of transparency and accountability. Why is he the first to prevent us from doing such? What gives?” said the NUJP.

“The proposed revisions take away the hard won gains in the fight for good governance,” the NUJP added.

SALNs have been a key document in investigative reports on the Estrada, Arroyo, and Aquino presidencies.

“Greatly disturbed by the Ombudsman’s initiatives to amend the SALN law which would have the effect of reducing, and not expanding, transparency, access, and accountability,” said Te.

Under Martires, the Office of the Ombudsman has also clammed up, rarely releasing resolutions and charge sheets. Reporters have had to rely on the anti-graft court Sandiganbayan once the charges reach them.

“Ironic, to put it mildly, that the Office would break its silence only to ask Congress to reduce transparency, access, and accountability,” said Te.

In once saying that commenting on SALNs should be punished by imprisonment, the NUJP said Martires “seems to be operating on the premise that the press is merely smearing the reputation of government officials.”

“But it is part of the press’ vital role in a democracy to seek transparency and accountability from government and the SALN is just one of the many effective tools we can use against corruption,” said the NUJP. 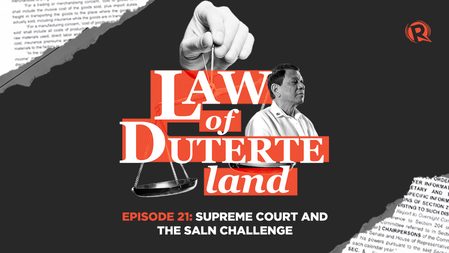