Facebook Twitter Copy URL
Copied
These law groups have been investigating the drug war long before DOJ stepped in. NUPL's Neri Colmenares asks: 'The question is, why is DOJ doing so little?'

Lawyers who have been investigating President Rodrigo Duterte’s bloody drug war are not satisfied with the Department of Justice’s newly-released matrix on 52 cases of drug war deaths, saying it is of no use to hold perpetrators accountable.

“It does not provide useful information to assist in making the offenders accountable; nor does it provide comfort or solace to the families of the victims of those killed in the name of the Duterte administration’s so-called war on drugs,” said the Free Legal Assistance Group (FLAG), one of the two groups petitioning the Supreme Court to declare the drug war unconstitutional.

Out of around 7,800 people killed by the police in anti-drug operations since 2016, the DOJ’s hyped review has examined only about 400 cases, releasing a matrix on Wednesday, October 20, on 52 of these.

The matrix showed several lapses in protocols by the police, like skipping documents and tests, and, in some cases, “excessive force” by shooting a suspect 15 times.

The Center for International Law (CenterLaw), FLAG’s co-petitioner, likened the DOJ matrix “sound and fury that signify nothing.”

“The findings presented in the DOJ matrix reveal nothing new: that there is a pattern of excessive use of force in the conduct of police operations, belying claims of nanlaban (resisting arrest),” said CenterLaw.

Indeed, these two groups have been telling the Supreme Court since 2017 that there was a pattern of abuse and misconduct. But the High Court has not ruled on the four-year-old petition as the government stalls with rubbish documents.

The matrix shows that even though the Philippine National Police (PNP) had found lapses and abuses in these cases, it kept them internal, imposing only administrative penalties most of them mere suspensions.

“CenterLaw expresses its grave concern over the fact that the great majority of the 52 cases only resulted in administrative sanctions, with only one case recommended for the filing of criminal charges,” said CenterLaw.

The Initiatives for Dialogue and Empowerment through Alternative Legal Services (IDEALS), which published a study on the drug war using reports painstakingly obtained from the secretive police, said: “In our organization’s database alone with more than 600 real, documented cases, 52 is not enough.”

“This is simply a last ditch effort of this administration to hide the fact that our system is unwilling and unable to sufficiently investigate and prosecute crimes against humanity,” said IDEALS. 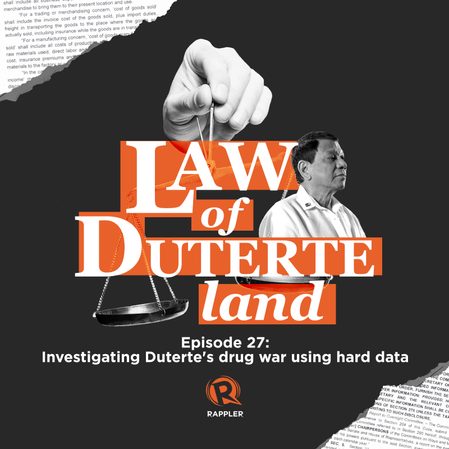 ‘Why is the DOJ doing so little?’

The National Union of Peoples’ Lawyers (NUPL), which has been handling cases of drug war deaths and the group behind the few legal wins against the campaign, said the matrix “confirms what we already know.”

“What the DOJ revealed is just the tip of the iceberg. There are plenty of incidents that need a deeper build-up to create an airtight case before the courts. All eyes are on the Duterte administration now the investigations on these deadly irregularities continue even as the International Criminal Court conducts its own inquiry,” said the NUPL.

In an earlier statement, Justice Secretary Menardo Guevarra said: “Rather than incessantly criticizing and putting down government efforts to bring justice to the victims, the NUPL would be more useful to the nation by extending a helping hand.”

NUPL chairman Neri Colmenares said: “I assure Secretary Guevarra that our human rights lawyers have been doing everything possible to obtain justice for their clients, even getting killed in the process.”

“The question is, why is DOJ doing so little when it is in a better position to investigate & prosecute the killers?” Colmenares said.

Guevarra said “we shall also endeavor to examine the thousands of other cases where the PNP found no liability on the part of police officers who participated in apparently legitimate operations.”

The drug war review was started only in June 2020 even though the government already knew in 2018 the police had killed around 5,000 with only dozens being prosecuted. Since June 2020, the DOJ has examined only around 400.

It is unclear at this point how DOJ can access more case folders since President Rodrigo Duterte limits access citing national security.

FLAG said: “The people deserve more than what the Panel is providing. As a first and necessary step, the Panel must review all the remaining cases, including those barred by the President.”

Rappler’s own investigation of the police reports submitted to the Supreme Court showed a poorly documented anti-drug campaign, where vigilantes are able to run amok in the province of Bulacan. – Rappler.com