Perp walked by NBI with no charge, man denies TikTok threat vs Marcos PERP WALKED. The man in black and green baseball cap is presented to a full press conference, flanked by several officials of the NBI, without a complaint or charge against him. Photo from NBI 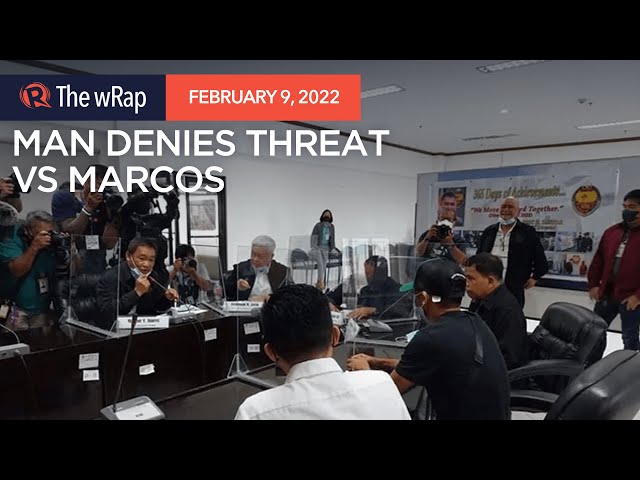 MANILA, Philippines – The National Bureau of Investigation (NBI) on Wednesday, February 9, perp walked or presented to the media, a man whom it was considering to be a person of interest in the supposed threat on TikTok to kill presidential front runner Ferdinand “Bongbong” Marcos Jr.

There is neither a complaint nor charge against the man, which would mean the NBI has no basis to arrest him or keep him in custody. The NBI said the man went to them voluntarily to clear his name.

“Hindi po akin ‘yun (the TikTok account was not mine),” said the man whom Rappler will neither name nor show to observe his bill of rights.

The NBI also repeatedly said during the press conference that the man was neither a suspect nor an accused because there was no complaint yet. The man had a lawyer beside him.

The NBI has the notoriety of perp walking a suspect without a lawyer. This became a problem for the agency in 2020 when they perp walked a teacher who allegedly tweeted a reward to kill President Rodrigo Duterte. The teacher was cleared three times.

Asked categorically if the man will be detained or released, NBI Deputy Director Vicente De Guzman said “as of now there is no case against the surrenderee, so we are conducting the investigation to determine whether there is criminal culpability.”

NBI press officer Nick Suarez later told Rappler: “He wil be released and is not under custody of the NBI.”

Justice Secretary Menardo Guevarra said “it’s safer not to give details, including on whether he is at home, in the NBI, or elsewhere, until the evaluation process is completed.”

“I have also directed the NBI to respect the rights of the subject,” said Guevarra Wednesday morning. But the NBI went ahead with the press conference Wednesday afternoon, even asking the man to remove his baseball cap.

In the press conference Wednesday, questions led the man to say he is a member of the Bikers for Leni, or cyclists supporting the candidacy of Marcos’ rival, Vice President Leni Robredo.

On February 3, Marcos’ spokesperson Vic Rodriguez said they were given information that the person of interest belongs to a “youth oriented group identified as communist.”

It was not clear if the man presented by the NBI was a different person than what Rodriguez was referring to.

In 2019, the NBI arrested without a warrant a webmaster named Rodel Jayme whom they linked to the infamous Bikoy narcovideos that accused Duterte of drug links. The warrantless arrest was one of the first cases that the NBI or DOJ interpreted continuing crime broadly.

A warrantless arrest is only valid if a person is caught in the act, or if there is probable cause to believe the suspect just committed the crime. Continuing crime is a principle typically only applied to rebel groups, or kidnappers, and the DOJ’s application of it on cyber libel was slammed for skirting due process.

Also in 2019, the NBI invited for questioning a physician being linked to the Philhealth scandal, and arrested him at his office without a warrant. The man was jailed for days despite a petition for the writ of habeas corpus, and DOJ also upheld its continuing crime theory.

In the case of the teacher who allegedly offered reward to kill Duterte, media was reminded to be careful in interviewing suspects because there are rights that need to be observed in a custodial investigation. However, media interviews are sometimes treated as being outside the sphere of custodial investigation, exposing subjects to abuse.