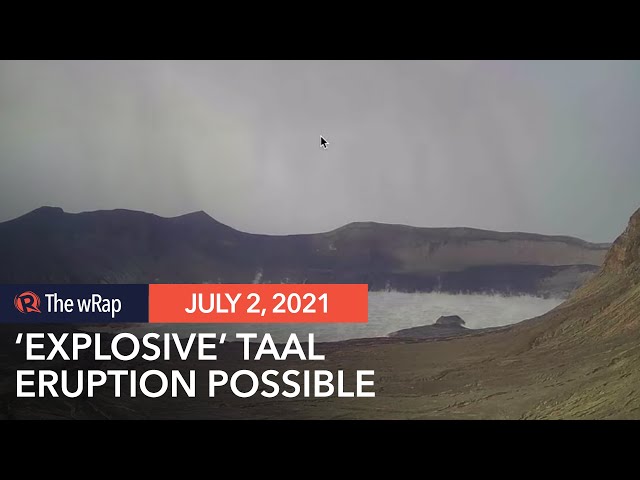 With Taal Volcano under Alert Level 3, magma pushing up toward the main crater could drive an “explosive eruption,” warned state volcanologists on Friday morning, July 2.

The Philippine Institute of Volcanology and Seismology (Phivolcs) had placed Taal Volcano under Alert Level 3 on Thursday afternoon, July 1, following “a short-lived phreatomagmatic eruption” that “generated a dark grayish plume” 1,000 meters or one kilometer high.

In its 8 am bulletin on Friday, Phivolcs also said the Taal Volcano Network recorded 29 volcanic earthquakes in the past 24-hour period. “Low-level background tremor” has been ongoing since April 8.

Sulfur dioxide (SO2) gas emissions remain high as well, indicating that magma is already at a shallow level.

Based on Phivolcs’ monitoring, SO2 emission averaged at 13,287 tons per day on Thursday.

“Steam-rich plumes” have risen as much as 3,000 meters or three kilometers high.

With the emissions, volcanic smog or vog persists over Taal and in the vicinity of the volcano.

Phivolcs earlier warned that vog could irritate the eyes, throat, and respiratory tract. Those with health conditions, the elderly, pregnant women, and children are most vulnerable to its effects.

What should people do?

Phivolcs reiterated that Taal Volcano Island is a permanent danger zone and should be off-limits.

Entry into high-risk barangays in the towns of Agoncillo and Laurel in Batangas should also be prohibited. These barangays were earlier identified as the following:

If “strong eruptions” occur, the high-risk areas could face pyroclastic density currents – clouds of hot gas, ash, and other volcanic debris – or a volcanic tsunami, given that Taal Volcano is situated within Taal Lake.

“All activities on Taal Lake should not be allowed at this time,” Phivolcs said.

Over 14,000 people had been evacuated in Batangas as of Thursday evening. – Rappler.com