From Manila to New Jersey, the privilege and infamy of the Marcos name 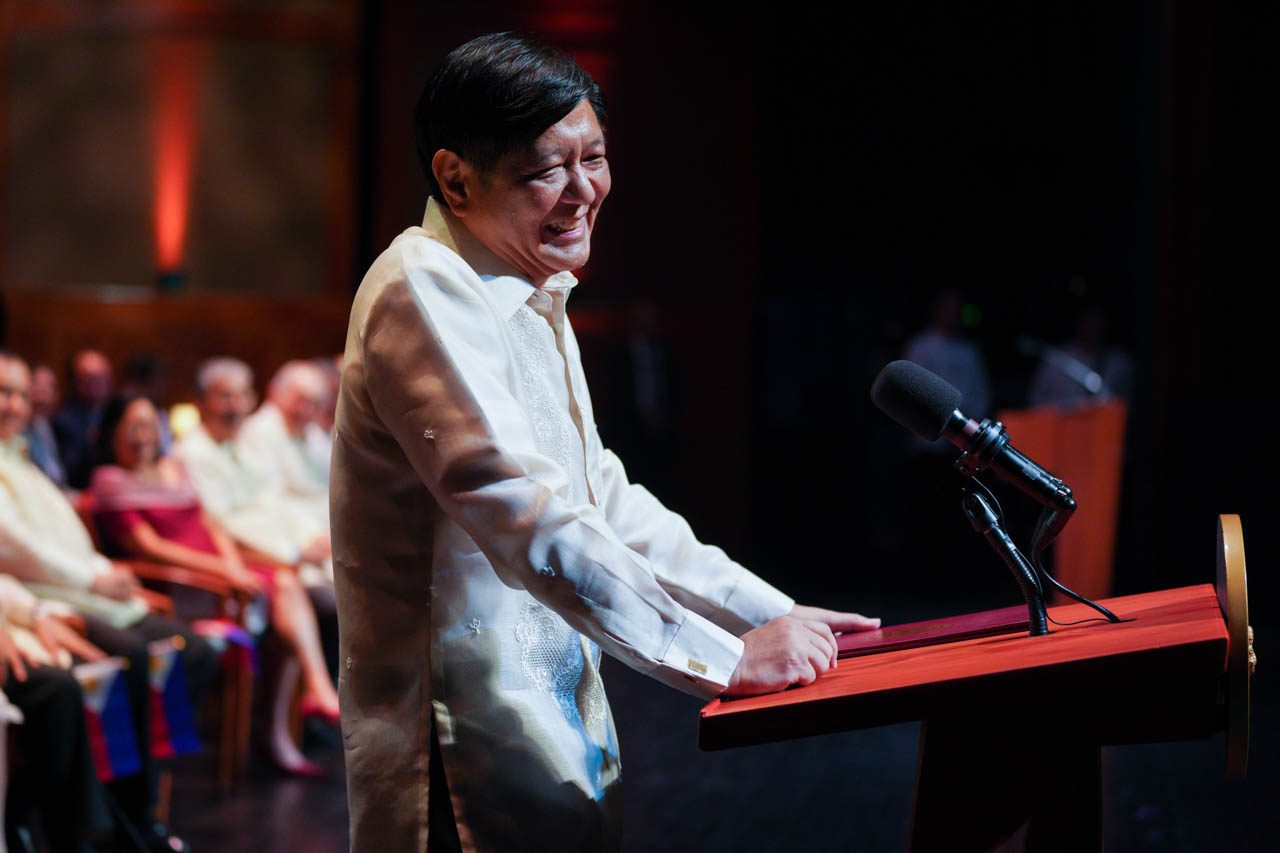 NEW JERSEY, USA – In front of the New Jersey Performance Arts Center (NJPAC) on Sunday, September 18, two separate crowds were getting ready for the arrival of a VIP all the way from the Philippines.

In lines that stretched to a nearby block, Filipinos and Filipino-Americans in traditional Filipino attire waited for their turn to enter the building, to later meet and listen to President Ferdinand Marcos, Jr., who had just landed in nearby Newark airport.

Across from them was a smaller but passionate group dressed mostly in red shirts, protesting his arrival. “Nagbihis pa kayo ng mga magagarbong damit para sa sambahin ang isang diktador? Proud pa kayo (You dressed up in fancy clothes to praise a dictator? And you’re proud)?”

Later, inside the hall, one Marcos supporter would say on mic: “Ang mga kabataan, ‘di nila alam ang sinasabi nila. ‘Di pa sila pinapanganak noon eh (The youth outside have no idea what they’re talking about. They weren’t even born then),” referring to the time of Marcos’ father, the late dictator Ferdinand Marcos, who is obviously adored by this group.

The crowd of over 1,000 – Filipinos immigrants from as far as the West Coast and Canada – cheered on.

From Manila to the tri-state area here (New York, New Jersey and Connecticut), the Marcos name carries with it both the privilege and burden of its past.

Family ties in Ferdinand Marcos Jr’s presidency go beyond comparisons to his father. With him in the US are several members of his family, many of whom are officials themselves.

Also on stage were a father-son duo with close ties to the Marcos clan: Marcos’ childhood friend Anton Lagdameo, who is now the Special Assistant to the President, and his father, permanent representative of the Philippines to the United Nations in New York Ambassador Antonio Manuel Lagdameo. The Lagdameos are part of a business clan in Mindanao that had close ties with the late president Marcos.

President Marcos’ second son, Joseph Simon Marcos, also flew in with him to the US but was not introduced as part of his delegation.

Marcos arrived in New Jersey around noon on September 18 (September 19 in the Philippines) to kick-off a six-day working visit that includes a speech on September 22 (early hours of September 21 in Manila) before the United Nations General Assembly during the high-level General Debate.

Foremost in the visit, too, is Philippine-American relations. After telling the crowd that he was hoping to meet US President Joe Biden and other world leaders, Marcos said: “Our bilateral alliance with the United States is possibly as important policy as there is in the Philippines.”

“Our relations with the United States remain strong and I believe we will make them stronger in the coming years,” he added, although neither Malacañang nor the White House have confirmed a meeting schedule for the two.

New York, said his uncle, Philippine Ambassador to the US Jose Manuel Romualdez, was a sentimental place for the President.

New York City is where he met First Lady Liza Araneta-Marcos. He was in court for cases filed against his mother, former first lady Imelda Marcos and she was visiting their lawyer, who happened to be a friend of Liza’s.

The anecdote tries to gloss over a glaring fact: that the Marcoses – in this case, Imelda – faced suits in the United States over human rights abuses and theft in the two decades the first President Marcos was in power.

The younger Marcos, in fact, has a standing contempt judgment issued against him by a United States court over a human rights class suit against his late dictator-father.

As head of state, Marcos enjoys diplomatic immunity and does not face the threat of arrest during his stay in the US.

But in the Northeast United States or states under the Philippine consulate in New York, it was their closest rivals – former vice president Leni Robredo and former Senator Kiko Pangilinan – who won the 2022 vote.

While most of those who attended the gathering in New Jersey were from the tri-state area (New York, New Jersey, and Connecticut), almost a third flew in from neighboring Canada.

Ana Maria Nava-Torres’ journey to the NJPAC wasn’t as long as other Marcos supporters – she lives in New Jersey – but her ties to the Marcos family are, perhaps, deeper than most.

“My father was in the military before. I grew up going to Malacañang Palace, meeting the president, his father, and the first lady,” she told reporters after the gathering.

“I expect a lot from him because I know his father was a great president. During that time, we saw a lot of changes. A lot of good things happening in the Philippines. I’m expecting a lot from him,” she added.

Marcos’ US working visit – on top of the agenda is to push the Philippine economy forward – is also about thanking the Filipino community here.

“I can promise you that this heroism of yours, of our kababayans will not fade into obscurity. Their legacy we will make live on as they continue to inspire our kababayans to show the world what it means to truly be Filipino,” he said.

(In the midst of tragedy, you served as pillars of hope, you are the new Filipino hero. We thank you for your service and sacrifice.) – Rappler.com